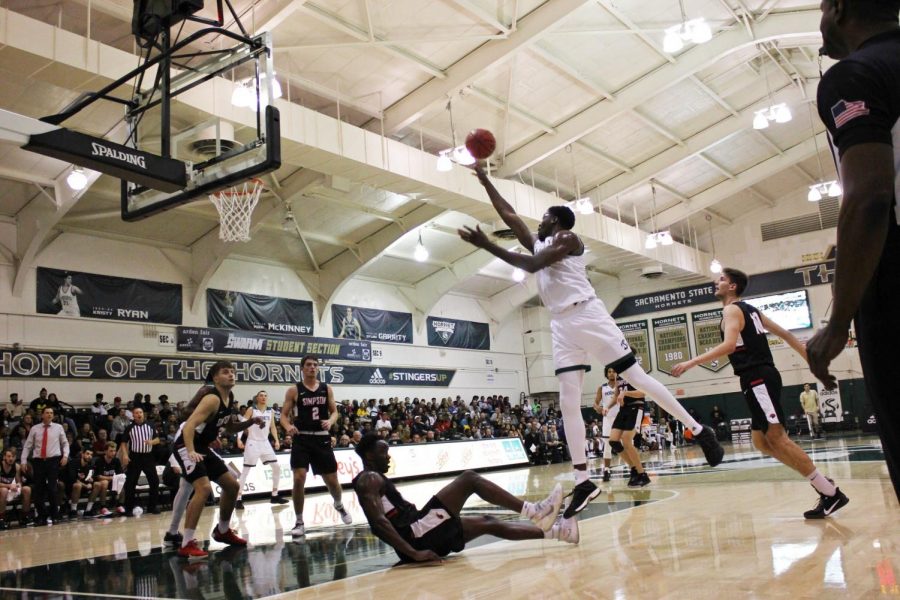 Sac State senior center Joshua Patton shoots the ball against Simpson on Friday, Nov. 8, at The Nest. Patton had a game-high 20 points on 9-11 from the field.

The Hornets shot 52 percent from the field in the first half and led by as many as 19 points before taking a 36-18 lead at halftime.

Sac State dominated inside the paint in the first half by scoring 22 points, while Simpson scored just four points down low.

Senior center Joshua Patton led the charge from inside and finished with 15 first half points and five dunks.

The Hornets opened the second half on a 22-6 run and pushed their lead to 58-24 in the first nine minutes of the half.

Sac State made five threes and scored 40 second half points before defeating Simpson 76-27.

“We made the game a little too hard early on,” head coach Brian Katz said. “I hope that’s just first-game jitters, but I did like our commitment to the defensive end.”

Simpson (1-3) made three total shots in the second half and missed all 14 three-point attempts. The Red Hawks shot 19 percent in the game and were outrebounded by the Hornets 61 to 29.

Sac State also forced Simpson to turn the ball over 12 times, including seven steals, and scored 19 points off those turnovers.

“We’re a positional defensive team,” Katz said. “If you’re in the right position and steals occur, great. But were not a gambling or reckless defensive team.”

“It feels good when you know that it’s going to be really hard for the other team to stop you,” Patton said. “My coaches worked hard with me all off-season and i’m ready this year.”

Katz said he hopes tonight’s performance is a foreshadowing of what Patton can do on the court this season.

“I think it’s his time, I really do,” Katz said. “He’s been a guy that’s shown flashes of that (and) been a little bit up and down in the past. So I’m hoping our fifth-year senior is going to be real consistent this season.”

The Hornets are back in action next Friday against University of California, Riverside inside The Nest. at 7:05 p.m.