REVIEW: ‘The Mandalorian’ is an instant cult classic for ‘Star Wars’ veterans 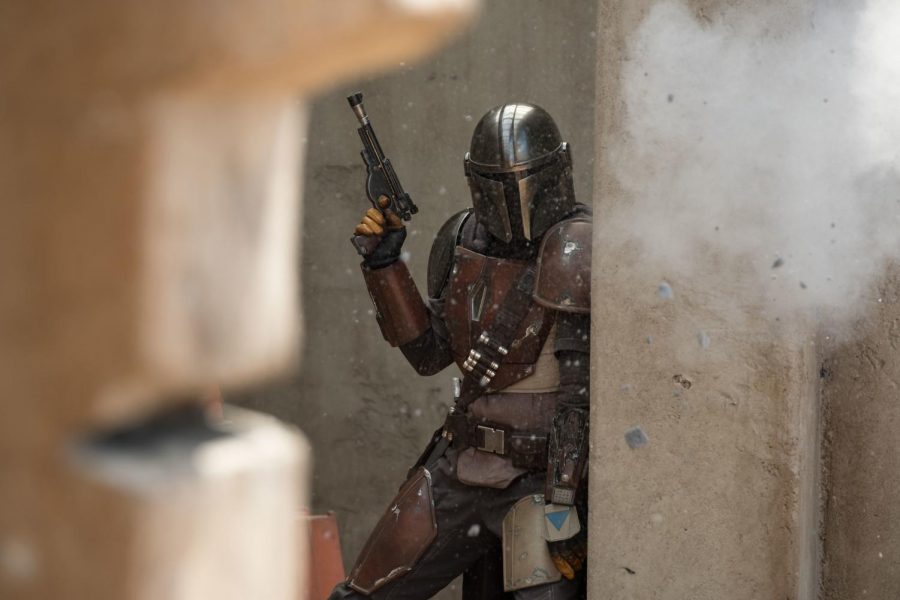 Pedro Pascal's title character takes cover during a gunfight in the first episode of "The Mandalorian." The series pilot was released with the launch of Disney+ Tuesday, Nov 12.

This review contains spoilers for the first two episodes of “The Mandalorian.”

“The Mandalorian” strips “Star Wars” down to its spaghetti western roots and provides quick-paced action series veterans are sure to enjoy, however, much like the titular character, the series provides little explanation, and that may make it difficult for casual viewers to jump in.

The Disney+ series wastes little time setting its tone as the armor-clad gunslinger enters a rundown bar on a snow-covered world and quickly starts a bar fight with a trio of thugs in the series’ opening scene.

Set following the fall of the Galactic Empire in the climactic battle of “Return of the Jedi,” Pedro Pascal portrays a masked bounty hunter of the same warrior culture as fan-favorite Boba Fett — the Mandalorians.

Pascal delivers a strong performance as the Mandalorian despite the character being a man of few words with his face hidden beneath his helmet. While such a character would usually serve as a background character with way too detailed of a backstory (see Tam Posla), Pascal’s performance commands the screen and doesn’t forfeit the lead role to any other character.

Series showrunner Jon Favreau (“Iron Man,” “The Lion King (2019)”) delivers a solid beginning of a story with these first two episodes that will intrigue veteran fans of the “Star Wars” series.

“The Mandalorian” offers the first glimpse of the post-Empire era that spans the time between “Return of the Jedi” and “The Force Awakens” while laying the seeds of what are sure to be long-held questions.

Released with the launch of Disney+ Nov. 11, the first episode of the series follows the Mandalorian as he comes under the employ of Werner Herzog’s “The Client,” a former imperial willing to pay in the highly valuable “beskar,” a rare metal central to the Mandalorian culture, for the capture and return of a highly sought-after target.

In the episode’s climax, the Mandalorian teams up with Taika Wakiti’s “IG-11” in an old fashioned shoot-out to secure the target, revealed to be a child of the same mysterious species of Jedi Master Yoda.

In the second episode released Friday, the Mandalorian is forced to work for a clan of Jawas, the small, hooded scavengers first seen in “A New Hope.” The episode’s standout moment is the Mandalorian’s attempt to climb the Jawa’s moving fortress as the scavengers try to scrape the bounty hunter off the side.

“The Mandalorian” is an outstanding space western, featuring thrilling gunfights in each episode as we follow a classic gunslinger born from the same cloth as Clint Eastwood’s “Man with No Name.” The light taste of the “Star Wars” series’ fantasy elements only serves to enhance the series feel.

On top of that, “The Mandalorian” is visually beautiful, providing incredible physical sets that give each planet a unique feeling, on top of amazing costume work to deliver an alien cast. While the show still relies on the use of CGI subpar to current films, the technology blends well with the sets compared to its use in the series’ past.

However, the quick pace of “The Mandalorian” and its deep dive into the “Star Wars” galaxy may not be a selling point for the casual viewer. Within the first episode, the series quickly moves the plot, reaching a point other series could take half a season to reach, but giving little explanation along the way and less time to process events.

Fortunately, the second episode takes things much slower and piles on less lore, so an average viewer can take their time to enjoy it.

While mileage may vary for the average viewer, “The Mandalorian” does its job of providing a thrilling space western on beautiful alien worlds with convincing enough aliens to become a cult classic for “Star Wars” veterans.

The remaining episodes of the first season of “The Mandalorian” are set to release Fridays on Disney+ until Dec. 27.