Quarterback situation still unclear, Idaho has only one home loss 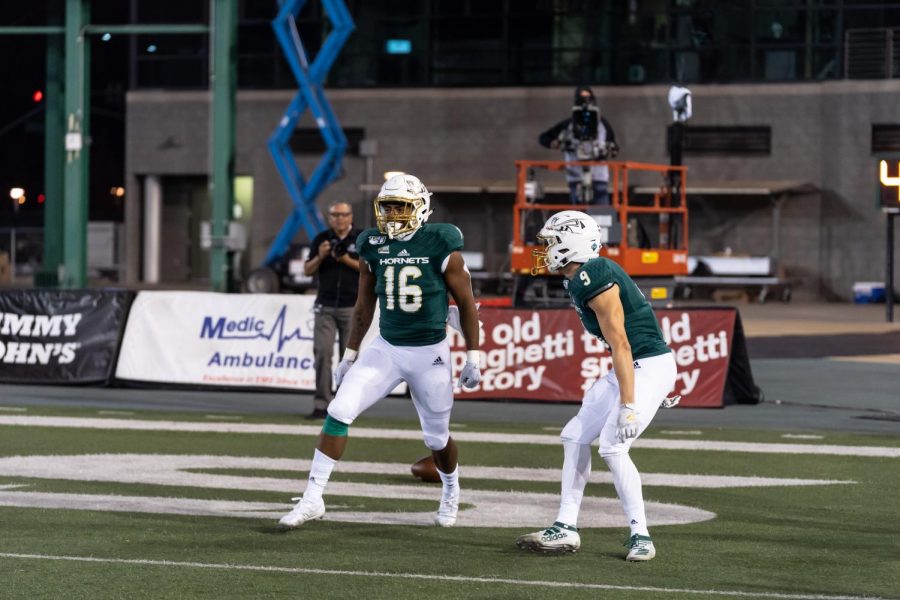 Sac State freshman tight end Marshel Martin (left) celebrates a touchdown with freshman wide receiver Parker Clayton against No. 3 Weber State on Nov. 2 at Hornet Stadium. The Hornets play at Idaho this Saturday in their final road game of the regular season.

After last week’s come-from-behind victory over Northern Arizona University, the Sacramento State football team prepares for its penultimate game of the season against the University of  Idaho on Saturday.

The Hornets rose to number six in the STATS and Coaches polls after their 38-34 win over the Lumberjacks while Idaho is unranked and coming off a 42-17 loss to No. 4 Montana.

A successful onside kick recovery and go-ahead touchdown by sophomore wide receiver Pierre Williams inside the last two minutes allowed the Hornets to escape with a close win against NAU.

Senior kicker Devon Medeiros talked about the onside kick recovery and how the play developed.

“It was pretty cool, we got really, really lucky that they called a timeout on the first onside kick because it went straight to the other guy,” Medeiros said. “Then our coach Jeremy LaPan hopped out there on one leg and said to me, ‘do the onside kick from last week,’ and it worked perfectly.”

Medeiros, who was named Big Sky Special Teams Player of the Week, has made five out of six field goals and all 17 extra point attempts in the last four games after missing his first two field goal tries of the season.

Williams has recorded at least two catches in every game this season and says he just wants to do whatever he can to help his teammates.

“I just try to catch the ball whenever it comes to me,” Willaims said. “A couple of drops frustrates me, but every time the ball comes my way I try to catch it.”

“It was pretty cool.”

The team’s second-to-last-game is against Idaho, who are 4-6 this season and 2-4 in Big Sky play. The Vandals’ only home loss was to conference leaders No. 3 Weber State University.

When it comes to the upcoming game against Idaho, Williams says the usual preparation won’t change for his team.

“Just the same as every week,” Williams said. “We believe we can beat any opponent as long as you prepare and come with the same energy, same intensity every week.”

Taylor stressed the importance of closing out the season on a strong note.

“Obviously every game down the stretch is really important,” Taylor said. “Just being mentally and emotionally ready to play.”

One area where the Hornets will want to reduce from the NAU game is the number of penalties. After drawing only two against Weber State, the team drew 12 flags for 78 yards last week.

Taylor said that is an area the team has been focusing on all season.

“We just gotta play more clean,” Taylor said. “You’ve got to be a smart football team. So that’s something we’ve been emphasizing and talking about through the entire season, but we’ve got to improve on that.”

The Hornets play at the Vandals on Saturday at 2 p.m. in Moscow, Idaho.