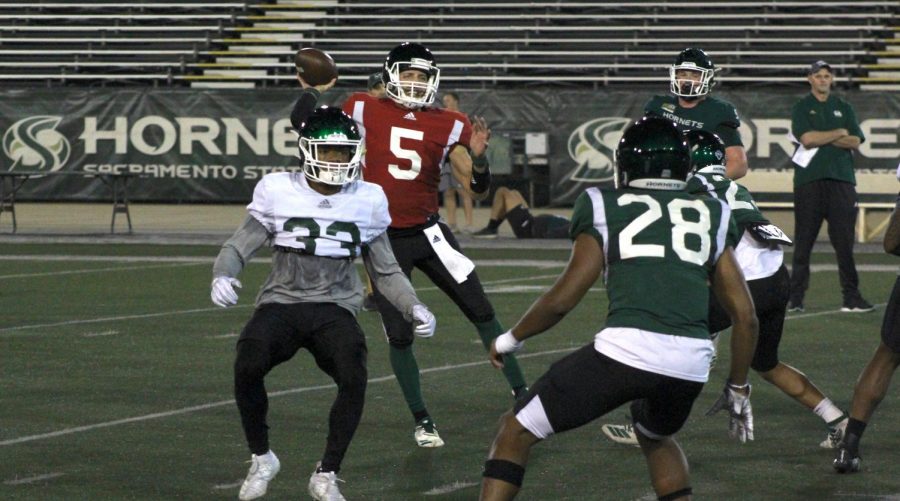 Sacramento State’s football team will look to win it’s first-ever Big Sky Championship as it hosts the 66th Causeway Classic against crosstown rivals the University of California, Davis on Saturday.

The Hornets rose to No. 4 in the Coaches and STATS polls after beating the University of Idaho 31-7 last week, while the Aggies are unranked and looking to bounce back from a 27-17 loss to No. 10 Montana State University.

Big Sky rivals Weber State University fell from No. 3 to No. 7 in the Coaches Poll (No. 6 in the STATS Poll) after being upset by the University of Montana, which took Weber’s place at No. 3.

The Wildcats’ loss has thrown the conference title up for grabs. Entering the final week of the regular season, up to five teams can win a share of the Big Sky Championship. Sac State will clinch at least a share of the title with a win against Davis.

Head coach Troy Taylor said that winning the school’s first Big Sky title would be a great achievement for the team.

“It’s huge (and) a great opportunity,” Taylor said. “It would be an unbelievable achievement, but right now, it’s all about getting prepared for a very good UC Davis football team. They’ll be ready to go.”

Taylor said that the team will be treating this game like any other, but acknowledged the meaning of the game for the region.

“I think both teams are taking each game really seriously, but I think people in the area are watching this one a little bit closer,” Taylor said. “It’s a great rivalry. Two teams that I believe have a lot of respect for each other. It should be fun.”

“It’s always tough, getting banged up a little bit.”@KevinThomsonX talks about returning from injury ahead of Sac State’s big game against UC Davis on Saturday. pic.twitter.com/dUhrAwde5G

Junior quarterback Kevin Thomson, who returned from injury last week against Idaho, said that winning the conference has been one of his personal goals since transferring.

“I’ve just wanted to win a Big Sky title ever since I got here, I know all these guys do too,” Thomson said. “But we’re just going to prepare like every other game this year. Focus on treating this opponent, just like we treat every other opponent. We’re feeling pretty confident right now.”

Also at stake in this game is Sac State’s playoff positioning. The Hornets are virtually assured to make the playoffs even with a loss, but a win would see them fortify their status as one of the eight seeded teams in the playoff bracket, giving them a bye into the second round.

It will be the first playoff appearance for Sac State football, having narrowly missed it in the 2017 season.

Junior defensive linemen Josiah Erickson described the transformation of the team from last season as “crazy” and “life-changing.”

“We all just came together (at) the beginning of the year and came up with a plan and basically said that (if) everyone locks in, everyone does their job, everyone works hard in the offseason, our coaches put us in the right positions,” Erickson said. “And that’s basically been our biggest thing. Everyone’s locked in, everyone’s bought into this program.”

The Hornets kick off the 66th Causeway Classic against the Aggies from Hornet Stadium on Saturday at 2 p.m.