Peak Adventures employees talk naturally about working for the program 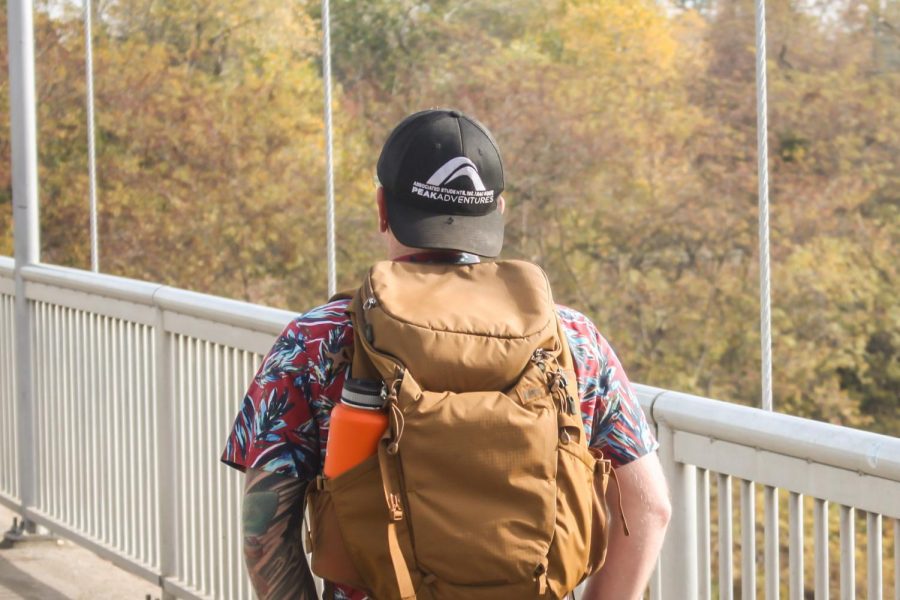 Kyle Murphy, a communication studies major, walking on the Guy West Bridge at Sacramento State. Murphy works with Peak Adventures at the Challenge Center and also serves as a whitewater rafting guide.

Peak Adventures is known for its bicycle shop, outdoor activities and trips as well as the challenge center behind Yosemite Hall, but to the student employees, it’s so much more.

Peak Adventures opened its doors officially to students after the program was picked up by and designated as part of Associated Students, Inc. in 1989.

Since then, the program has provided many opportunities to students including snowshoeing trips, hikes, our very own campus bike shop, discussion panels and on-campus student employment.

The State Hornet sat down with two employees of Peak Adventures, Mia Summer Perez and Kyle Murphy, to talk about their experiences with Peak Adventures and what it means to them to work with the program.

“I got hired on (last year) out at the ropes course,” Perez said. “It’s located behind Yosemite Hall, it’s the climbing structure out there. That was my first job with Peak Adventures.”

Since being hired last year, Perez has also gotten a job working at the front desk of Peak Adventures’ bike shop and also serves as a whitewater rafting guide.

“I had no experience in the ropes course whatsoever,” Perez said. “They basically taught me everything that I needed to know about the ropes course and built me up from knowing nothing to feeling really competent and leading small groups.”

Perez said that she wanted to apply to work for Peak Adventures for a year prior to being hired, but had difficulty finding the right listing.

In addition to working with Peak Adventures, Perez is also an avid backpacker.

“I started (backpacking) in high school,” Perez said. “I went to this program called NatureBridge, (their) field research course. It’s a science, but it’s not lab science where you are controlling different elements. It’s where you go out and measure in the actual field and collect raw data. So that’s what we were doing, (conducting) our own field research.”

“I have a cousin who has been whitewater rafting for, like, 20 plus years,” Perez said. “I got an opportunity to train with him last season, 2018, and he taught me everything that I needed to know.”

Perez said she originally wanted to attend Cal Poly San Luis Obispo, but that Sac State and Peak Adventures have given her experiences and opportunities that proved Sac State was the place for her.

Kyle Murphy has been working with Peak Adventures for four years and says that the ASI-funded program has helped him in his life significantly.

“The cool thing about working for Peak Adventures (is) we have a very systematic way of training people,” Murphy said. “You get a lot of exposure to public speaking and team-building and leadership and stuff like that. I like to tell people that really what it’s about, (is) building your resume while you’re here.”

Murphy explained that the progression is very fast and “really straightforward” when working for Peak Adventures.

“You start off as an apprentice on the ropes course and you can move just through checking things off on a list… You can just move your way up the latter very fluidly,” Murphy said. “There’s not a whole lot of opportunities out there like that in entry-level positions.”

For Murphy, the experience of working with Peak Adventures has been very valuable.

“It’s one of the most valuable experiences I’ve had in my life,” Murphy said. “I’m an older student. I’m 30 years old. I’ve been working in customer service for 15 years. I’ve seen a variety of potential jobs that are out there and different ways of living. The truth is that there are just not that many opportunities to work with people who subscribe to a similar ideology as you.”

Murphy has been rock climbing for the past six to seven years and has been backpacking his whole life. He says it’s very important to work with a company that promotes those types of activities.

“We’re really a lifestyle company, we really are,” Murphy said, describing Peak Adventures. “You know a group of individuals who care about getting in the outdoors and valuing those experiences and personal growth to us like Peak is… really super valuable.”

Like Perez, Murphy works the ropes course and as a whitewater rafting guide. Murphy also leads outdoor trips and said he likes to give knowledge about the places they go on trips to students who are unaware of the nature surrounding them.

“I just really love taking people out and showing them nature and giving them access to the nature that we have in our own backyard so to speak,” Murphy said. “Most of the places that we go aren’t really more than a couple hours away.”

Murphy also podcasts about his lifestyle, including hiking, climbing and yoga on his show “Be-wilderness.”

“The basic concept of the podcast is to have an open discussion with individuals that circulate in these different communities that I’m a part of, mainly yoga and the wilderness,” Murphy said.

Although his podcast is still new with only three episodes, Murphy said he already has around 100 listeners.

“I wanted to help create or help sustain that community outside of those experiences,” Murphy said. “That’s kind of the base idea is that if these are things that interest you then you can kind of tap into those communities through podcasting whenever you’d like.”