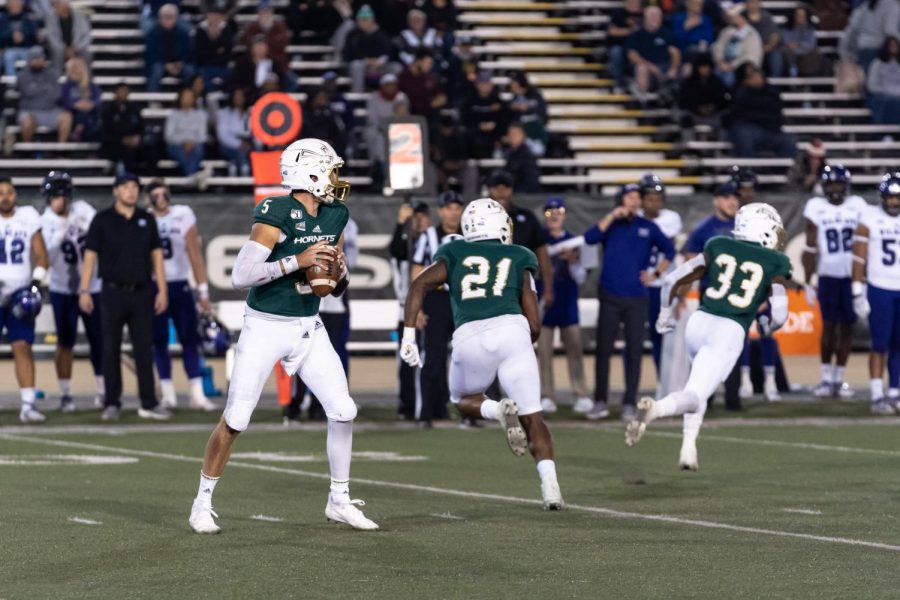 Sac State junior quarterback Kevin Thomson prepares to throw against Weber State on Saturday, Nov. 2, at Hornet Stadium. Thomson had a total of 144 passing yards before leaving the game in the second quarter due to an injury.

Sacramento State’s football team couldn’t find a way through Weber State’s defense at home on Saturday night and suffered its first conference defeat of the season, 36-17.

The Hornets entered the game ranked at No. 6 in the Coaches and STATS Poll following its 38-14 win over California Polytechnic State University last week. Weber State was ranked No. 3 in both polls after a 36-20 win versus University of California, Davis.

Weber State got the ball to start the game after Sac State won the toss and deferred. The Wildcats utilised the ground-and-pound technique on its opening drive, running eight times before quarterback Jake Constantine found Hayden Meacham for a three yard touchdown pass.

The Hornets responded by driving down to the 24 yard line before settling for a 42 yard field goal from Devon Medeiros. A short drive for the Wildcats ended in a punt, downed on the Hornets two yard line.

Deep in their own territory quarterback Kevin Thomson was sacked on a third down and fumbled. The ball was recovered in the endzone by Sac State offensive linemen Troy Stiefel for a Wildcats safety. The Hornets trailed at the end of the first quarter, 9-3.

Weber State came out swinging in the second quarter with Constantine finding Ty Macpherson for a 59 yard touchdown pass, pushing the lead to 16-3.

Sac State finally found the endzone with 10 minutes left in the half when Thomson connected with Marshel Martin from 31 yards out, cutting the lead to 16-10. Weber State then embarked on a 10 play, five minute drive, ending in a one yard touchdown run from Kris Jackson.

Things got worse for the Hornets as Thomson was injured late in the quarter after being hit while throwing. He was replaced by sophomore Jake Dunniway who was picked off in the endzone by Ja’Kobe Harris. The Wildcats couldn’t score with the minimal time left on the clock and took a 23-10 lead into halftime.

The normally potent running game for Sac State was pacified in the first half, only recording 44 yards on 15 attempts. The team only had one third down conversion in seven attempts.

Defensive back Marcus Bruce said that the defense had to pick itself up at halftime in order to combat Weber State’s offense.

“They had a really good offense. We had to go in at half time, we kinda came in and just sat there and looked at each other, everybody in the eye. And we were just like, man, we gotta get it together,” Bruce said. “We’re not playing the game that we’re supposed to play.  We play fast and we attack and today, it just kind of wasn’t attacking all times.”

Halftime didn’t do any wonders for Sac State as Dunniway was picked off by Harris on the first play of the second half, which Weber State converted into a two yard touchdown run by Jackson.

Neither team could do much with the ball in the third quarter and combined for six consecutive punts with the Wildcats retaining their 29-10 lead going into the fourth quarter.

The Hornets had a chance to put points on the board early in the fourth, but turned the ball over on downs after Dunniway overthrew his man on fourth down. The Wildcats found the endzone again courtesy of a 24 yard touchdown run by Josh Davis.

Sac State got a late consolation score as Pierre Williams caught a 58 yard touchdown, giving Dunniway his first career touchdown pass as a Hornet. This was the last score of the game however as Weber State claimed a dominant 36-17 win.

Hornets coach Troy Taylor said that the Wildcats prevented the team from getting into its natural rhythm.

“We never quite got in sync,” Taylor said. “We did some good things, but you know, you gotta give them credit for that. They’re the ones that kept us from getting in sync. It hasn’t really happened in a while, so they did a great job in that.”

Taylor says that the team needs to “lick our wounds and then get ready for Northern Arizona” following their first conference loss at the hands of Weber State. @SH_Sports pic.twitter.com/Kybh5InlBA

Taylor didn’t have any update regarding Thomson’s condition following the game, but should he be out long term, Dunniway says that he is ready to start in his place.

“We prepare everyday like you’re the guy,” Dunniway said. “So, we pray that Kevin recovers and he’s going to be okay, but every day at practice, I strive to push him to make him better. Make me better. For the unfortunate situation that, if he does go down that, you know, we don’t skip a beat on offense.”

With the loss, the Hornets fall to 6-3 on the season and are now tied with Montana for second in the Big Sky. Sac State holds the tiebreaker thanks to its win over the Grizzlies two weeks ago.

Taylor said that the team will not sulk after the loss, but move forward to the next game like they do when they win.

“From here, we just got to respond,” Taylor said. “It’s no fun to lose but you gotta be able to bounce back and we’re going to treat it the same way when we wake up tomorrow, lick our wounds and then get ready for Northern Arizona.”

The Hornets will travel to face Northern Arizona at the Walkup Skydome on Saturday at 2 p.m.