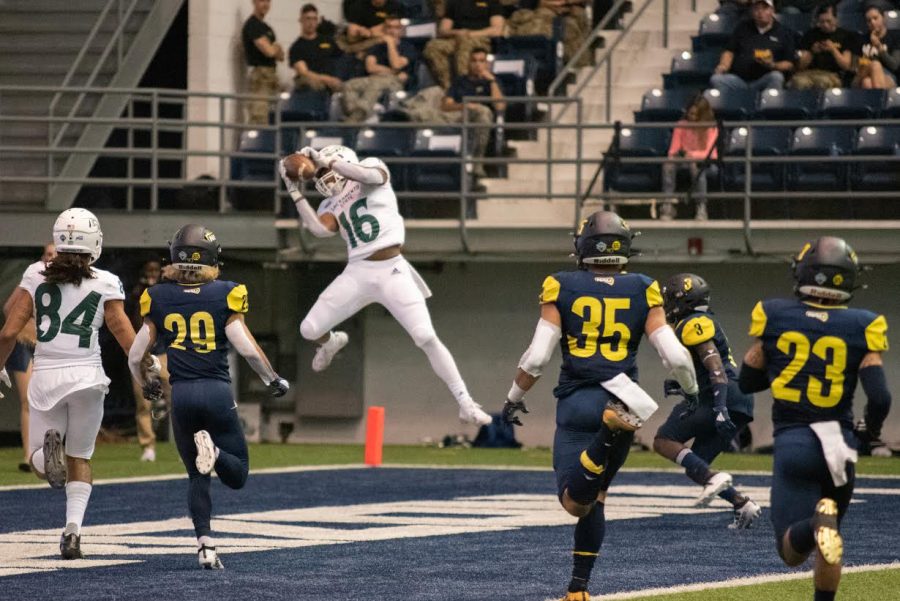 Sac State freshman tight end Marshel Martin catches a touchdown pass against Northern Arizona on Saturday, Nov. 9 at the Walkup Skydome in Flagstaff, Arizona. Martin had four receptions for 92 yards and two touchdowns in the 38-34 win over the Lumberjacks on Saturday.

The Hornets (7-3, 5-1 Big Sky Conference) entered the game ranked number eight in the Coaches and STATS polls and number five in the Football Championship Subdivision playoff committee rankings following the loss to Weber State on Saturday, Nov. 2. Northern Arizona entered the game coming off a 66-38 loss to Eastern Washington.

Junior quarterback Kevin Thomson was ruled out with an injury and didn’t make the trip to Arizona, giving sophomore Jake Dunniway his first career start at quarterback. Head coach Troy Taylor would not comment on the nature of Thomson’s injury.

Despite two offsides penalties gifting NAU a first down on the opening drive, the home team was forced to punt later in the drive. The Hornets took over and scored after freshman tight end Marshel Martin broke free from the safeties and hauled in a 63-yard touchdown catch to put Sac State up 7-0.

Martin went on to catch another touchdown in the quarter, increasing the lead to 14-0 at the end of the first.

Dunniway said that the team’s early success helped to build confidence for later in the game. 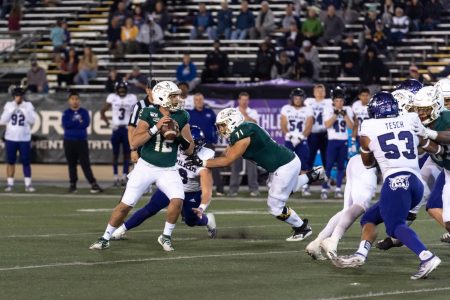 Sac State sophomore quarterback Jake Dunniway prepares to throw against Weber State on Nov. 2 at Hornet Stadium. In his first start of the season, Dunniway completed 27 of 44 passes for 384 yards, four touchdowns and one interception in the 38-34 win at Northern Arizona on Saturday.

“Executing feels good,” Dunniway said. “Building some confidence, that way we can last the whole game and execute throughout the whole game. It’s just nice to see everything culminate on a Saturday.”

The Lumberjacks recovered a fumble early in the second quarter as Dunniway was stripped, setting Northern Arizona up with great field position. They used this to punch in a one-yard touchdown courtesy of senior running back Joe Logan, cutting the lead to 14-7.

A 42-yard Sac State field goal from senior kicker Devon Medeiros restored the Hornets’ double digit lead, but it was short lived as Logan broke out for a 51-yard touchdown run to make it a three-point game. Logan would go on to rack up 210 yards and three touchdowns in the game.

After a three-and-out from Sac State resulted in a punt, Northern Arizona got the ball and junior kicker Luis Aguilar tied the game with a 44-yard field goal, sending the game into halftime tied at 17 points.

Taylor said the team didn’t make the most of their opportunities in the game.

“There was a stretch there where I felt like we could have really taken an advantage and we didn’t,” Taylor said. “Kind of let them off the hook. They’re resilient, they came back, tied it up at halftime.”

It took the Hornets eight plays on the opening drive of the second half to reach the endzone, with junior RB B.J. Perkinson scoring on a seven-yard sweep. Both teams struggled moving the ball in the remainder of the third quarter and the Hornets took a 24-17 lead heading into the fourth.

Early in the quarter, Dunniway’s pass was intercepted by sophomore defensive back Anthony Sweeney, giving the Lumberjacks the ball at their own 27-yard line. It took one play for fifth-year senior quarterback Case Cookus to find junior wide receiver Stacy Chukwumezie wide open for a 73-yard touchdown, tying the game at 24.

A miserable drive for Sac State that included a delay of game penalty, a pass that was nearly intercepted and a bad snap that almost led to a fumble forced the Hornets to punt the ball. NAU went from their own nine yard line down to the Hornets’ 37 before Aguilar kicked a 54-yard field goal, giving the Lumberjacks their first lead of the game at 27-24.

A 63-yard rushing touchdown from Logan gave Northern Arizona a 10-point lead with just under six minutes to go.

Despite being down 10 points with limited time left, Dunniway said that the Hornets always felt like they could win the game.

A costly late hit penalty on NAU allowed the Hornets to get the ball back, with Dunniway finding junior wide receiver Isaiah Gable for a 30-yard touchdown to cut the gap to three with 1:38 to go.

Sac State converted their first onside kick of the year as Williams recovered the ball on the Lumberjack 49 yard line, giving Sac State a chance to turn the game around.

Dunniway went on to describe the team’s thinking as they prepared to run the two minute drill.

“We run those scenarios every day in practice so that we can go down, be smart with the ball, get as many yards as we can and get out of bounds,” Dunniway said.

Dunniway lead the team down the field and found Williams open on the left side for an 18-yard touchdown pass to take a 38-34 lead with only 23 seconds left.

Northern Arizona failed to pull off a hook-and-ladder play in the final seconds, giving the Hornets their seventh win of the year. This was the first home loss for Northern Arizona this season. 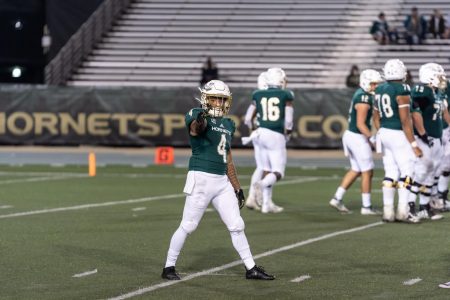 Sac State junior wide receiver Isaiah Gable signals to the official on the sideline against Weber State on Nov. 2 at Hornet Stadium. Gable had five receptions for 85 yards and one touchdown in the 38-34 win at Northern Arizona on Saturday.

Taylor credited the team for sticking in and competing instead of folding when they were behind.

“The thing about it is how the guys just continued to compete, especially on special teams,” Taylor said. “The two special teams plays were incredibly big. They were really the difference.”

Dunniway said that the team was comfortable throwing the ball and that the win came down to self-belief.

Sac State plays at Idaho next Saturday in the final road game of the regular season at 2 p.m.