The ins and outs of ‘Neophyte Presentations’ with Kappa Alpha Psi 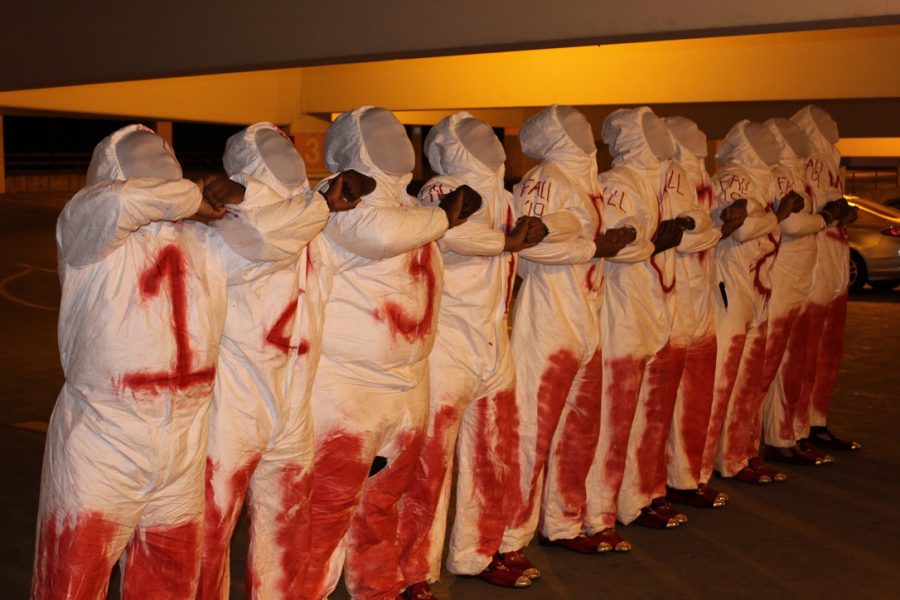 The newest line of Kappa Alpha Psi members stand prepared for their reveal an hour before their performance Nov. 22. A "line" in a Greek organization is the group of people joining at the same time.

All in unison, the sounds of their feet created three consistent booms as they tapped their canes, even alarming the police.

Full of excitement, the newest members were prepared and ready to show their families and friends that they were now a part of a brotherhood: Kappa Alpha Psi.

An estimated 300 people waited behind the Guy West Bridge on Nov. 22 for the presentation of the newest members of Kappa Alpha Psi.

Ten new members were debuted during the event, referred to by the fraternity as a “Neophyte Presentation.” Neophyte is a Greek word meaning a new member of an organization.

Kappa Alpha Psi, however, has not been active as a chapter on Sac State’s campus for close to a year and a half as the last member graduated in 2018.

Kappa Alpha Psi alumni chapter member and undergraduate liaison DeVon Smith said the fraternity has not brought in any new members since fall 2013, making the 10 new members that were presented the first members accepted into the fraternity in six years.

Jeffrey Phelps, communication studies major and the first member presented, said “I joined for brotherhood and the opportunities being a Kappa can bring to myself and the community. I searched for a long time to find an organization that gives back and empowers the African American community.”

Prospective members that do not pass the test are allowed one retake before being deferred to the next semester.

“We look at the person you are and what you’re going to bring to Kappa, you must bring value to our organization,” said Smith.

One additional requirement for joining is to be an “upstanding citizen,” meaning prospective members cannot have a criminal record and must do good by the community.

During a Neophyte Presentation, each new member is lined up by height and given a corresponding number. The members are masked to conceal their identities and dressed in a cream jumpsuit with splashes of crimson — the fraternity colors.

The presentation on Nov. 22 began with the first three members unexpectedly emerging from the top of the Guy West Bridge. Immediately after the rest of the members rushed through a red mist to the center of the plaza at the end of Guy West Bridge.

The new members got into their formation, locking arms as they stood tall and strong, their chins up high. The alumni chapter members went one by one high-fiving the new recruits in a three-tap sequence, repeating “I’m proud of you, I appreciate you.”

The Neophytes’ families, friends and classmates, as well as members of other fraternities and sororities, crowded them during the presentation.

“I felt on top of the world,” Rucker said. “The amount of love and support my brothers and myself received was unmatched.”

The new members broke out in chants, stepped and rapped to different popular hip hop songs, adding words related to the fraternity. The crowd yelled out in excitement, some even screaming the numbers of the members they were associated with, cheering on the new members.

The Kappas’ chant, “Yo baby, yo baby, yo!” was heard throughout the presentation.

The new members’ identities remained concealed for almost four hours before they were unveiled one by one. During the unveiling, each member took off the jumpsuit to reveal black slacks and a crimson turtle neck to accent their tuxedo-style bedazzled loafers.

They then yelled out key things about themselves such as their fraternity “nickname” they created once they joined, where they were from and what they study at Sac State. Every member ended the unveiling by finally removing their mask to show their identity.

Quincy Corsey, a double major in sociology and anthropology as well as the fourth member revealed said he was overcome with emotion during his reveal.

“When I finally took my mask off it was one of the most surreal feelings,” Corsey said. “I went to shows just like mine and watched so many videos like that, but this time it was mine and I earned it. It was overwhelming at first and felt like a dream.”

Once all 10 members were unveiled, they began a historic fraternity dance called the “Kappa Cane Step.” When the members were done cane stepping, they were given fraternity jackets and stepping canes in fraternity colors.

These canes are given to members once initiation is complete and the significance of the cane is only known by fraternity members.

To conclude the presentation, all alumni chapter members crowded the Neophytes for a final chant.

Ohaeri said his reaction to watching his younger brother was “unparalleled.”

“Seeing my younger brother begin (the process), work toward, and be initiated into an organization that has been a key contributor to the professional and personal successes in my life can simply be described as omnipotent joy,” Ohaeri said.

“After revealing myself, it was just a breath of fresh air, a load lifted off my back,” he said. “The crowd, my brothers, my family and friends, the energy in front of us… It was phenomenal.”

“I’ve never experienced so much love, respect, and excitement before in my entire life,” McNamee said. “I am happy to say I’m finally a member of Kappa Alpha Psi Fraternity. I can’t wait to inspire great service in the public’s interest.”