EDITORIAL: PG&E shut off power to 1.3 million people in the month of October and their CEO said customers should expect this strategy for the next 10 years. The State Hornet editorial board weighs in on whether it’s time to move on from the public utility company: 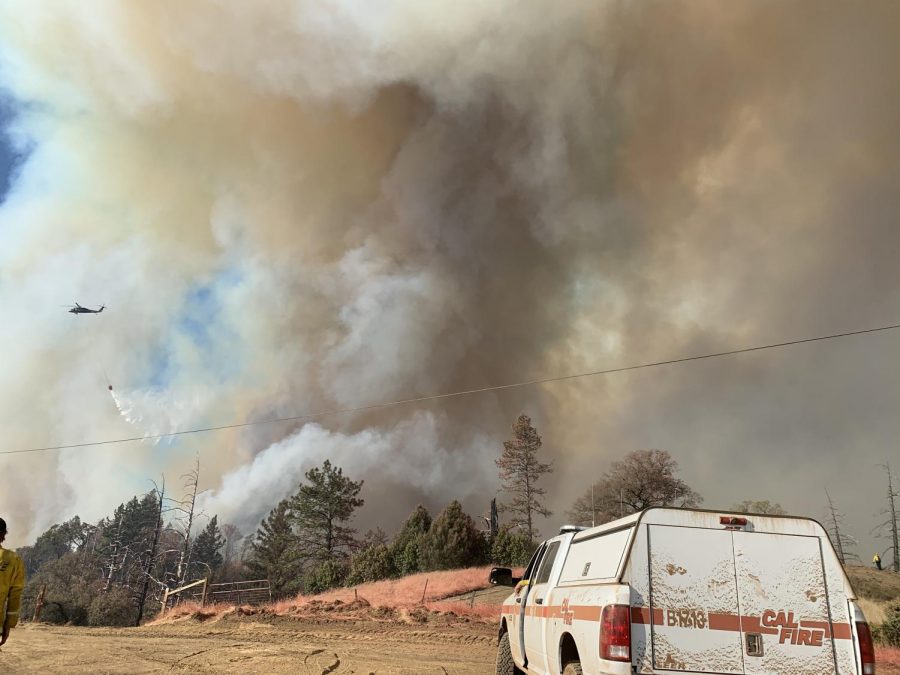 Cal Fire firefighter Xavier Chavez shoots pictures with his phone while helping fight the Kincade Fire in Sonoma county. The fire destroyed 374 structure and on Monday a federal judge ordered an investigation as to whether a transmission line malfunction reported by PG&E was the cause of the fire.

Live in darkness or risk losing everything in a wildfire?

This was the choice given to Pacific Gas & Electric customers during much of the month of October.

Except it wasn’t even a choice, it was a mandate by the company that customers, who in many cases have no other options for a utility provider, could not opt-out of.

Now, after 1.3 million people had their power shut off and the Kincade Fire ravaged over 77,758 acres, U.S. District Judge William Alsup has ordered an investigation into whether a damaged power line operated by PG&E was the cause of the fire.

Meanwhile, many cities with public utility companies, from Redding to Sacramento to Anaheim, kept the lights on and the fire dangers at bay.

PG&E holding a virtual monopoly over much of California to profit off the daily necessity of gas and electricity has failed its customers and caused death, pain and misery for too many Californians.

It’s time for the for-profit utility company to die and for Californians to be given a safe, reliable and accountable alternative.

PG&E has proven over and over that the safety of Californians comes a distant second to the financial health of the company. A 2012 report by the California Public Utilities Commission showed the company’s internal report card, with which they judge their success, does not even include customer safety but five other factors, four of which are financial.

So it seems customer safety actually comes in a distant sixth. At best.

PG&E survived the scandal of causing the hexavalent chromium poisoning of 600 residents in Hinkley, CA in 1996 via unsafe dumping practices, an accident made infamous by the movie “Erin Brockovich.”

PG&E survived being put on federal probation after a pipeline explosion killed eight people and leveled 38 homes in San Bruno in 2010.

PG&E even survived being found guilty of six felony charges and fined $3 million in 2017. They also paid $550 million in settlements and $1.6 billion in fines imposed by state regulators for falsifying safety records, according to a 2018 CPUC report.

Their response after their conviction went something like this:

“We at PG&E have committed ourselves to a goal of transforming this company into the safest and most reliable energy provider in America and to re-earning their trust through our actions. Of course, words are not enough, and we expect to be judged by our actions.”

Less than two years after that statement, the Camp Fire killed 85 people and destroyed nearly the entire town of Paradise. The cause? A broken live wire from a transmission tower that was 25 years older than it should have been by PG&E’s own standards.

Back in July, ABC10 published a handy article titled “How to leave PG&E for good… but it’s not that easy.”

Granted, some of these companies only provide gas or electricity, as opposed to both. But the point stands — difficult as the road to them may be, there are some solid alternatives to PG&E. As outlined in ABC10’s article, if you’re tired of random shut-offs and annual wildfires, the campaign to get out from under PG&E starts at the community level.

With mayors across the state looking to establish a SMUD-equivalent or buy PG&E out and Gov. Gavin Newsom looking at state ownership, now’s a good a time as any to get the ball rolling in your area.

But whether it comes from the top-down at the state level or bottom-up at the community level, something must be done about PG&E, and something or someone has to break the monopoly.

I mean, what else are we going to do next time the power goes off for a week?