Kennedy Nicholas scores 30 points but fouls out in deciding seconds 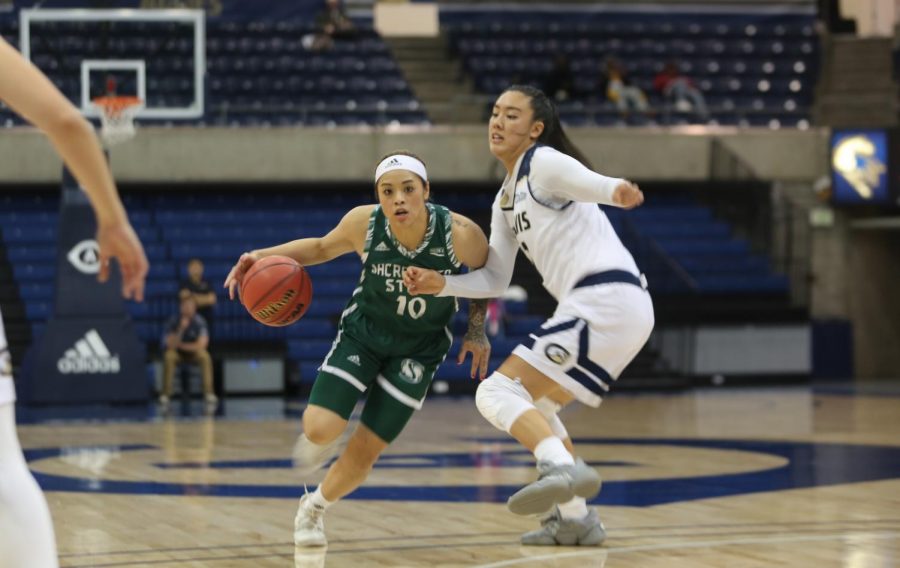 Sac State senior guard Gabi Bade drives to the basket against UC Davis on Tuesday, Nov. 26 at The Pavilion. The Hornets lost to the Aggies 77-75 in double-overtime.

The Sacramento State women’s basketball team traversed the Yolo Causeway to visit local rival UC Davis, just a short 18 miles from their home campus, in search of a much-needed win.

The Hornets (1-4) were looking to bounce back after two frustrating losses at San Jose State and Cal Poly earlier this month. While the Hornets did play better than they had in recent games, the matchup with the Aggies (2-4) only ended in more frustration.

UC Davis didn’t see their first lead of the game until the second overtime period, but they pulled ahead at the last moment to top Sac State with a final score of 77-75.

The women’s basketball version of the Causeway Classic featured a matchup between two prolific senior guards in UC Davis’ Katie Toole and Sac State’s Gabi Bade. Both led their teams in scoring heading into the game, with Toole averaging 20.2 points per game and Bade averaging 16.

Nicholas spent the early part of the season recovering from a sprained ankle but appeared to finally be back to her old self after the tip-off in Davis. She collected a game-leading eight points in the first quarter as the Hornets built a 21-12 lead.

First quarter leads have been common for the Hornets this season, though they haven’t often led to wins. In fact, the Hornets have led after one quarter in every game this year, but only have one win to show for it.

“We drove the ball really well and we got a lot of kick-backs to find our shooters,” Bade said of the early success. “That’s how Kennedy got a lot of her points ー dishes to her when we drove to the key.”

The second quarter was equally promising for Sac State, as Nicholas scored another seven points and the Hornets built their lead to 42-30 by halftime. UC Davis junior forward Cierra Hall led the Aggies in scoring with nine points at intermission.

The Hornets appeared to be losing control midway through the third quarter as they saw their lead cut to just two points after a layup by UC Davis senior forward Nina Bessolo.

Sac State senior guard Camariah King slowed down the energy of a frantic Hornet squad and helped initiate another run with strong defense, crisp passing and a fantastic baseline dribble drive that made it 53-48 at the end of the third quarter. King would finish with 15 points on the night.

But the Aggies pushed back in the fourth quarter, as a 3-pointer from sophomore forward Kayla Konrad tied the game at 57 with five minutes left. It was the first time Sac State surrendered their lead since the first minute of the game.

“There were some things we didn’t do well down the stretch,” Harkleroad said. “We foul too much and we turn the ball over too much. That’s been the difference in three of our four losses.”

Sac State quickly pulled ahead again as Nicholas, Menke, and Burks each contributed tough field goals in the closing minutes, but UC Davis answered back again. This time it was Hall with a pair of free throws with three seconds left to send the game to overtime.

The causeway rivals continued to go punch for punch as neither team could create separation after one overtime period that ended tied 70-70.

UC Davis got their first lead of the night on a free throw from Toole, making it 73-72 with one minute and 47 seconds left in the second overtime period. Nicholas fouled out a short time later but not before earning a double-double and tying her career-high of 30 points and adding 11 rebounds.

Without their most prolific offensive weapon, Sac State faltered at the end and lost the game 77-75 in double overtime.

Nicholas tied her career-high with 30 points on the night. A few moments later, however, she fouled out of the game, leaving Sac State in a tough spot with only a few seconds left.

The Hornets couldn’t get the basket they needed as they lose to UC Davis [email protected]_Sports pic.twitter.com/oz6nrHx4CG

The loss was the Hornets’ third in a row, and fifth in a row against the Aggies, dating back to 2015-16.

“Outside of the (Big Sky) Conference Tournament, this is the most important game for me every year,” said an emotional Nicholas after the game. “This was our year. This was our chance. I’ve never beaten Davis and I still haven’t.

“We need to learn how to win.”

Sac State will have until Dec. 6th to regroup when they travel to Seattle University in search of their second win of the season.