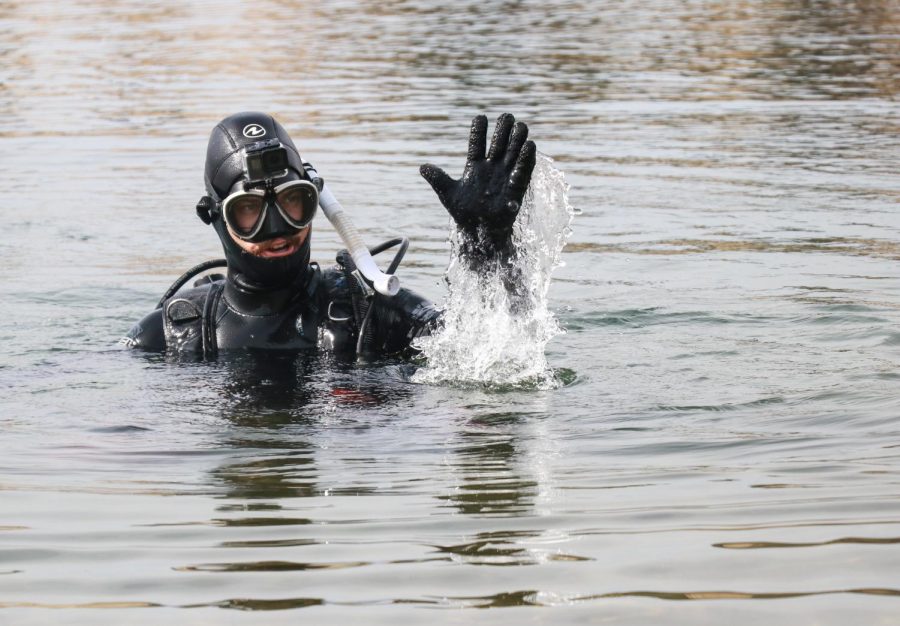 Sac State student Michael Pelley waves to a passersby as he scuba dives at Lake Natoma on Wednesday, Oct 16. “I actually got a picture from a fan that’s a picture of me scuba diving, she ended up drawing it while watching one of my videos,” Pelley said. “It’s the best piece of treasure i’ve gotten so far.”

Many Sacramento residents, especially in the summer months, make memories on the water at places like the American River, sometimes losing mementos and possessions in the process.

Now, Sacramento State business major Michael Pelley dedicates time deep diving to the bottom of local bodies of water to clean up trash and recover some of these memories, documenting every step online.

Pelley, also known as “Merman Mike,” said he got into deepwater exploration through watching others do it on YouTube.

“I was watching a lot of DALLMYD videos. He’s another person on YouTube that goes out and returns lost valuables. He also picks up all the trash. That stood out to me,” Pelley said. “I was watching him and I was getting a little envious of like, ‘I wish I could do that,’ and then I was thinking, ‘Why can’t I?’”

Pelley then got his scuba certification, which he said took about a month. Eventually, he created his own YouTube channel and named it “Merman Mike.”

“I was just trying to think of something that was catchy and was something that could really stick with someone,” Pelley said. “It kinda just rolled off the tongue. Me and my girlfriend were bouncing ideas back and forth, and that was one of the first ones.”

“I am always scared for his safety,” Phillips said. “It’s a mixture of emotions because when he does come up, he normally has something cool in his hands. It really warms my heart to see his smiling face on a dive day. He’s a little kid when he is out there.”

Phillips serves not only as company and support for Pelley, helping with battery changes for Pelley’s GoPro camera, emptying his treasure jar between dives and answering questions from curious passersby.

Phillips says that Pelley has found his true passion in deep diving and finding new treasures each day he adventures out to a body of water.

“We all have our passions in life that make us feel all-around good and happy while doing them. That is diving for Mike,” Phillips said. “I think he finally found something that all-around makes him feel great while doing it.”

One day, Pelley received a message on Facebook from a woman named Karen Beres.

Beres sent the message after she had seen a Reddit post showing Pelley finding a lost phone while the owner was kayaking, and hoped Pelley could help her find a camera she had lost at Lake Clementine containing several sentimental photos, including ones of her late mother.

Pelley agreed to help, and Beres said he had only been in the water for about five minutes when his metal detector went off and he found the camera.

“I took it up (and I was screaming. I was so excited,” Pelley said. “(Beres) was head-over-heels. Just absolutely excited. I still can’t stop smiling even when I think about it now, it’s the highlight of my diving so far.”

The camera had been lost for over a year, but the photos were later salvaged successfully, even after being completely submerged.

“I was very grateful,” Beres said. “I didn’t think that the SD card would still work. Thousands of cherished memories on that. It was really nice.”

Pelley says one of the creepiest and craziest things he has found is a voodoo doll, found taped around a rock at the bottom of a river.

“My girlfriend was not happy I took that home with us,” said Pelley.

Pelley shares not only lost valuables in his videos, but things like trash and glass shards to hopefully bring awareness to environmental issues and to encourage viewers to stay safe and help clean up rivers and lakes as much as they can.

“I think it’s really important people see how much glass is in there, one to prevent them from bringing it themselves,” Pelley said. “But also maybe they get their kids a pair of river booties the next time they’re at the river to prevent injuries.”

Pelley’s YouTube channel currently has 381 subscribers, but is growing steadily with each video he uploads. Pelley says that the support is amazing and something that he didn’t expect to receive.

“My buddy asked me ‘Well, if you didn’t have a single person that ever watched your videos, would you still do it?’ And my answer was immediately, ‘Every single day if I could,’” Pelley said. “I just figure if other people can enjoy what I do as well, (that’s) more enjoyable for everyone.”

Pelley uses diving as a way to escape and cope with the stresses of school and work.

“It’s keeping me sane during all of this work and school and all that,” Pelley said. “It’s like my therapy. When things get too much, I go diving.”