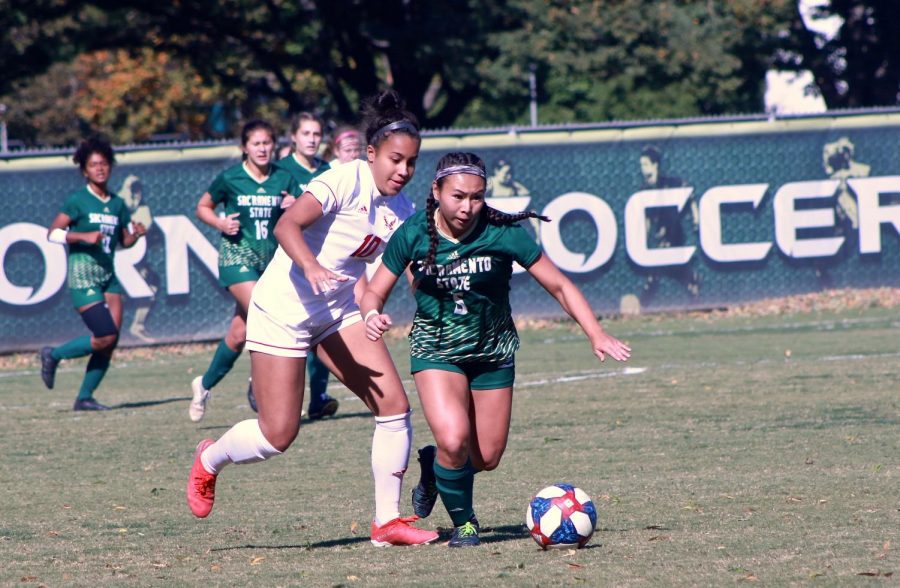 Sunday’s match pitted two of the best teams in the Big Sky Conference against each other with the third-place Hornets (11-1-6, 5-0-4 Big Sky) and second-place Eagles (9-6-2, 6-1-1) both undefeated in conference play.

At the start of the game, the Eagles and Hornets fought back and forth as Eastern Washington had the advantage of the wind at their backs in the first half but could not take advantage and score.

Sac State junior goalkeeper Aaliyah Fesili had to compete against the wind as the Eagles took shot after shot, yet Fesili managed to keep the Eagles from succeeding.

“(Playing against the wind) was really hard,” Fesili said. “It reminded me a lot of the Northern Colorado game. It was very difficult for me especially when it came to punting and kicking because it would just rollback.”

The first period ended with both teams failing to score and as the second period progressed it looked like overtime would be likely. In fact, in 19 matches this season for the Hornets, seven have gone into overtime.

However, in the 72nd minute, Sac State junior defender Aubrey Goodwill scored a penalty kick, the first and only point in the match.

“It was so exciting,” Goodwill said. “It wouldn’t have happened without my team, we battled the whole game.”

With pressure from the Hornets and the wind under their wings, the Eagles found themselves unable to take flight, ultimately failing to score against the Hornet’s defense.

Sunday’s win pushed the Hornets from third place in the Big Sky Conference into first surpassing the second-place Eagles.

Sac State head coach Randy Dedini was elated with his team’s effort Sunday as well as all season long.

“We’ve still got a lot of work to do and we’re not going to be satisfied with this, we want to get through the tournament and win it.”

Sac State had its only loss in the first match of the season on the road Aug. 23 at UC Davis.

The Hornets are currently in first place in the Big Sky Conference. Sac State has already clinched the second seed and a first-round bye in the upcoming tournament which begins Nov. 6. However, Eastern Washington and Montana University have a match Oct. 30 that will decide the first seed and regular-season conference champion.