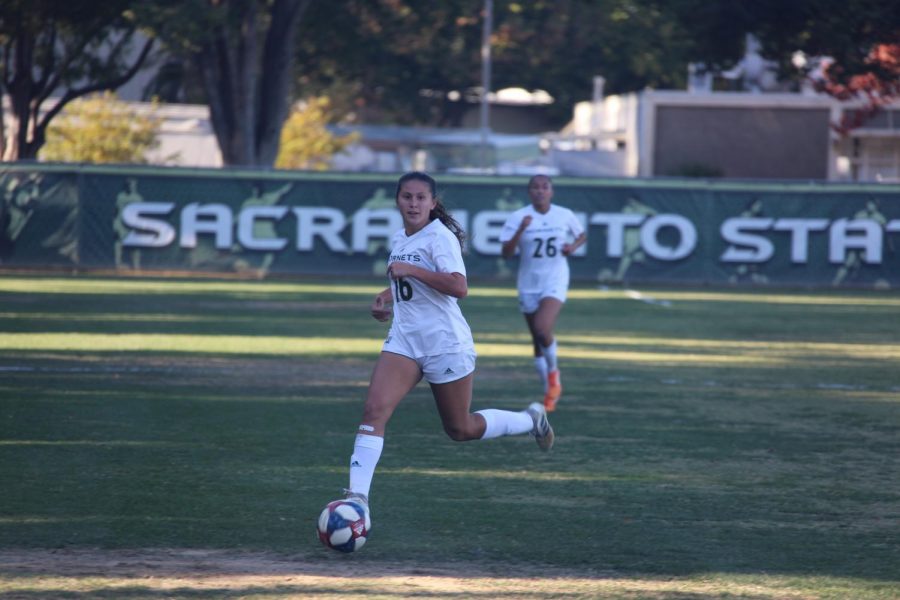 The game was deadlocked at zero throughout regulation and the first half of overtime.

Then in the 110th minute, with only 44 seconds left in the game, Craig scored to give the Hornets the win.

“I actually called that I was going to get the game-winner in the huddle (before the play),” said Craig.

Sac State head coach Randy Dedini said he is expecting Craig to bring that confidence and ability to hit game-winners in future matches.

“I didn’t hear (her call the shot), but if she did it, I mean, call it next game too, man,” Dedini said. “Because we love the game-winners.”

With the win Friday, the Hornets tied a Big Sky record with 16 consecutive matches without a loss. Sac State’s only loss this season came in the first match of the season Aug. 23 at rival UC Davis.

However, even though Friday’s game ended in favor of the Hornets, Dedini said he sees areas in which this team needs to improve.

“There wasn’t a great blow to the game,” Dedini said. “We got to do a better job of settling the game and taking control of the ball.”

Dedini said he hopes to correct some weaknesses before Sac State is set to begin the Big Sky Conference tournament. The Hornets are currently third in Big Sky, three points back of first place, and have already clinched a spot in the tournament.

Going into the tournament, Dedini said he wants his team to focus more on the process of the matches than the results.

@SacStateWSoccer head coach Randy Dedini explains how this game was not the best his team has played, but he is proud of his teams fight. @SH_Sports @TheStateHornet pic.twitter.com/lBqs4v1N2Y

— Vince Castellana (@VinceCastellana) October 26, 2019
RELATED: #SacStateSays: ‘What are your thoughts on Sacramento officially getting an MLS team?’

Hornets junior goalkeeper Aaliyah Fesili explained the importance of not overlooking any team in the Big Sky regardless of record.

“Everyone in the Big Sky is a good team,” Fesili said. “So our mentality is to never treat any team like a record shows, because they’re always better.”

Sac State will begin the Big Sky Conference tournament Nov. 6. The Hornets finish out the regular season on Senior Day Sunday at noon against Eastern Washington University at Hornet Field.