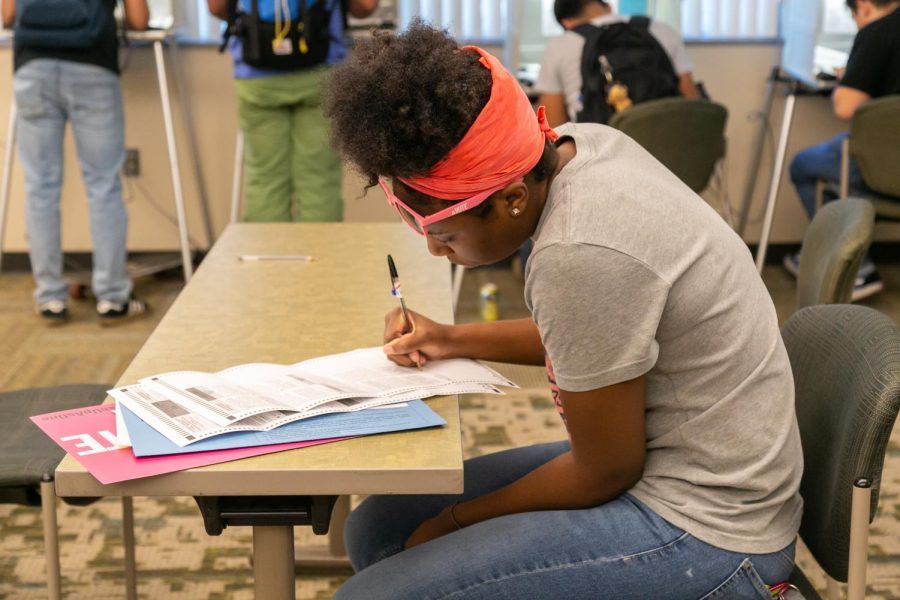 Last November, a three-hour line of voters stretched through Sacramento State’s Modoc Hall as the university hosted the first vote center on a California college campus.

Assemblymember Ash Kalra, D-San Jose, is the bill’s author, and said Sac State’s vote center was the key example used to argue for the bill.

“The real-world example of what happens when you have a vote center on campus, was instrumental because sometimes we introduce bills presuming what might happen,” Kalra said. “But in this case, we have an example of what already happened.”

Kalra credited the bill’s passage to support from youth voter groups like March for Our Lives and the testimonies of Sac State students. One of those students was Noel Mora, a graduate student of Public Policy & Administration and former president of Associated Students, Inc.

“I knew that what I was going to bring to the legislators was something really special, without any filter, without anything else other than this is everything that happened in a nutshell,” Mora said. “They were overwhelmed, they just ultimately ended up having no other expression or reaction other than, ‘Wow, this is this has proven to obviously have the results that it’s intending to have.’”

“Elementary schools and high schools are required to provide space for polling places, we expanded that to include colleges and universities,” Schwab said. “If a county election official approaches a college and says, ‘Hey, I would like a vote center or a polling place on your campus,’ they can’t say no.”

Sac State hosted the first vote center on a California college campus during the 2018 election, according to Schwab.

That year, Sacramento County was one of five counties to opt-in to a new voting system established under the 2016 Voter’s Choice Act that delivers vote-by-mail ballots to every registered voter and replaces traditional polling places with vote centers.

Vote centers open three to 10 days before Election Day and allow voters to vote in-person or drop off a mail ballot at any location within their county. Vote centers also provide replacement ballots, same-day registration and translated voting materials, according to the California Secretary of State’s office.

Mora also argued that many students didn’t have the time to vote under the traditional model.

“However many classes you take, there is an investment. Not just to be physically present at those, but also to do the work that’s required. Most students (also) work,” Mora said. “How do you find not only the time, but how do you make sure that you go to your assigned polling location? That’s how the traditional model of voting really works.”

“With the vote center model and the Voter’s Choice Act, it doesn’t matter if you don’t have an assigned vote center,” Mora said. “If you work in the downtown area, you could go to a vote center that’s in that area, in that proximity. If you are at Sac State and you have a two-hour break in between classes, you can go to the vote center (on campus).”

Sophie Vang, a Sac State anthropology major, said the vote center system helps students who previously had to plan around their days to vote.

“It’s easy access to go there instead of having a certain location,” Vang said. “If it’s far away, you have to plan out your timing, whether you have breaks or not, to go to the assigned location.”

Mora credited a grant from the California Endowment in helping Sac State set an example for college and university vote centers.

“As a pilot, what you really want to do is make sure that the model can be replicated, you want to make sure that others want to adopt the model, which is why we decided to go all out,” Mora said. “All of this is what can happen if college campuses are prioritized as places to have a vote center. So you can see I’m visibly excited to this day, that’s the kind of experiences and the kind of energy that was ultimately convincing to the legislators.”

Mora said he tried to emphasize in his testimony the number of groups on Sac State that supported the vote center, such as the Black Student Union, the Lavender Coalition, Nu Kappa Alpha and Students for Quality Education.

Sac State math major Parker Olsen said the vote center would make it easier for her to vote.

“I wasn’t able to vote in the last election, but I didn’t know where to go to vote,” Olsen said. “I’m on campus every single day, so it’d be a lot nicer to have that access close to me and know that it’s somewhere on campus and I can find it.”