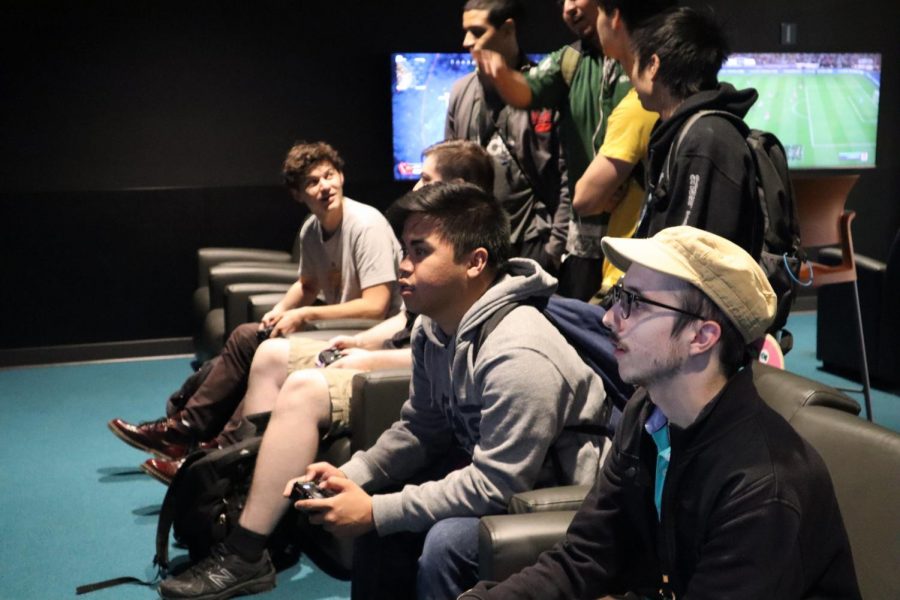 Marc Alfonso and Gabriel Ionica, members of the Stinger Esports team, play a video game Tuesday, Oct. 15 at the University Union Game Room. The club currently has over 400 members according to Director Donna Walters.

The Stinger Esports club began about two years ago and is quickly evolving into a very popular group on Sacramento State’s campus.

Stinger Esports was founded in the fall of 2017 by Nick Palsgaard, who graduated from Sac State with his bachelor’s degree in mechanical engineering in the spring and is currently working toward a master’s in the same subject, also at Sac State.

Donna “BasicTaq” Walters is the current director of Stinger Esports.

Walters partnered with Palsgaard in the summer of 2018 to grow the organization and attract more members. According to Walters, the club has grown from less than 20 to roughly over 400 members since. University records show only 75 students registered as members of Stinger Esports through Hornet Hub.

RELATED: Stinger Esports placed on probation until May 2020 for multiple violations

“Our leadership team focuses on creating a culture of inclusion and diversity,” Walters said.

Gaming within Esports is conducted through collegiate sectors with 300 to 400 college teams competing in tournaments, according to Walters. These teams compete through brackets such as Tespa, a collegiate bracket for games made by Blizzard Entertainment.

The student members of Stinger Esports currently do not have a centralized location, so they congregate in their dorms, in their homes, or at in-person tournaments.

Walters said she is currently working with the University Union and the College of Engineering and Computer Science in order to get a specific area to meet and train.

Esports being added as a sport to the Big Sky Conference has been another topic of discussion for the club recently and Walters said she hopes it will come to fruition, but didn’t have any specifics to share at the time of publication.

“(We are) definitely in the talks as to bringing something to Sac State through Big Sky,” Walters said. “I’ve been a part of the planning process and I’m keeping my fingers crossed that I’ll have some good news to share soon.”

For now, Walters is focused on keeping the club open and inclusive for any interested potential members.

“You can be of any kind of national origin, identity, ability and it really doesn’t matter, you will be accepted in our community,” Walters said.

According to journalism major and former State Hornet staff member Gabriel Ionica, Sac State’s gaming community is all-inclusive, and members of all different backgrounds and abilities can join.

“I joined because it was a unique opportunity to be around people who share a love for Esports,” Ionica said. “It’s an all-inclusive culture. Anyone can join, regardless of gender, sexual orientation, religion, or even the games they play.”

“I love the club, it was a great way to find people who share things in common and make friends,” Darby said. “I’ve met some of my closest friends through it and even my boyfriend. But I also like how we get a glimpse of competitive gaming through it. It’s helped to get us known around the collegiate community (and) one step closer to playing with the pros.”

Walters said the club decides what games to play based on what’s most popular, with “League of Legends” and “Overwatch” being current hits.

Palsgaard credited the popularity of the games for the growth of the gaming community on campus.

“I founded the club in 2017 and I only had five people including me,” he said. “After our first rush week, I was able to get 20 people to the first meeting and started teams and competed in ‘Counter-Strike: Global Offensive’ and ‘League of Legends.’ After that semester, the popularity of ‘Overwatch’ really put us on the Sac State map with local professional Overwatch team SF Shock pairing up with us.”

Walters said culture in Esports is similar to any other sport in the sense that they both come with a competitive edge.

“People definitely get frustrated that they’re not playing up to their standards or if they’re just getting wrecked,” Walters said. “There’s anonymity online where people can say things that they would never say to your face.”

“When they come here to our community, they realize that’s not acceptable. We want a supportive place that we can call home.”

UPDATE: This story was updated on Oct. 25 to reflect that Stinger Esports only has 75 members registered with Sac State’s Student Organizations & Leadership.