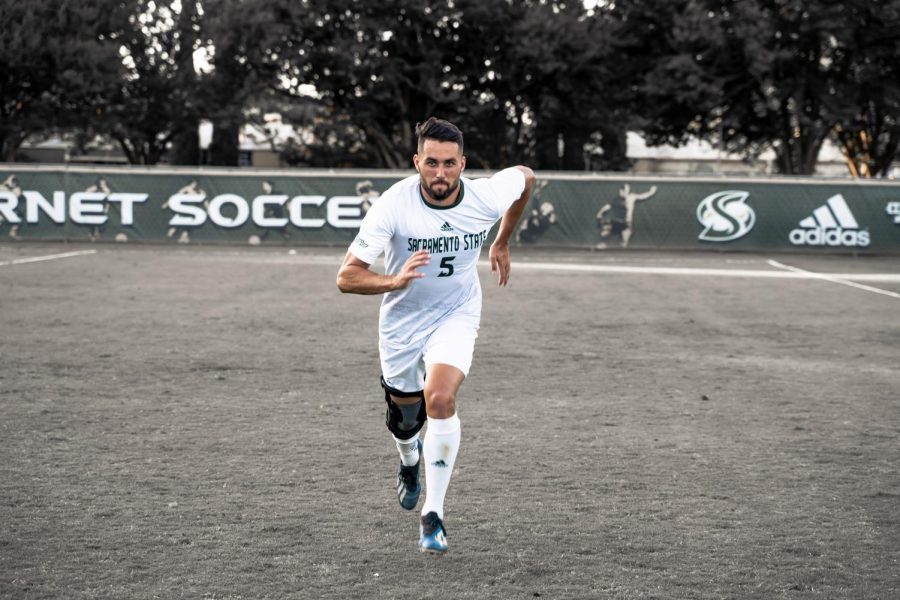 Sac State senior defender Mac Harrington runs toward the camera in this photo illustration Thursday, Sept 19, after a game against the University of San Francisco. Harrington is coming back from a torn ACL that prematurely ended his junior season Sept. 29, 2018.

In September 2018 while playing a game at UC Davis, Hornet soccer senior defender Mac Harrington went down with an injury after a late hit by an Aggies player, later discovering that he completely tore his ACL.

His junior season was over.

Harrington was the starting center back and his injury, suffered in the final game before Big West Conference play began, was devastating for the team. The Hornets struggled without him and finished the season 2-5 in conference.

The remainder of the 2018 season was hard for Harrington as he had to support his teammates from the sideline.

“There’s a difference between when you are sitting on the bench (injured) and (when) you can play,” Harrington said. “When you can’t do anything and you also have to watch your teammates struggle as well, that was very tough.”

Harrington started this season, his final one, as a substitute, but said he hopes to be back at full strength by the end of it, which for him means competing for all 90 minutes of the match.

Harrington is also serving as captain this season and said he is pleased with the team’s morale and current record of 5-4-1. He attributes some of the Hornets’ energy to an intense team-building training regiment that took place prior to the beginning of the season.

“It was kind of a military-like program,” Harrington said. “Not only was it difficult physically, but also it was more about mentality. It’s kind of like attacking everything you do, giving your 100 percent for everyone on the team and I think it really helped us see the potential that we could have.”

Harrington said that the team bonded together during the preseason and is basically a family, more so than his previous years here.

Head coach Michael Linenberger, in his 31st season with the team, agrees with Harrington about the closeness of his 2019 squad.

“Of my 30 plus years here, this team so far this season has been the closest- knit group and most supportive group for each other that I’ve seen,” said Linenberger.

Since his injury, Harrington has spent the last eight months in physical therapy and said he has worked every day to become comfortable on the field again. The senior defender said he is fully aware of the severity of a torn ACL and the seriousness of the recovery process.

“Coming back from a major injury is tough for a lot of people,” Harrington said. “A lot of athletes struggle with it and it really damages your career.”

The captain went on to discuss the doubts that can creep into your mind when you are dealing with a serious injury and how the hurdles of rehab go beyond physical limitations.

“It’s the mental stuff,” Harrington said. “Not being sure of yourself in a movement where you would have not even thought twice about it (before the injury).”

Harrington points to the overwhelming amount of support he received as one of the main things that drove him through his recovery.

“Just having the support that I did around me, from my family, my teammates, and my ex-teammates really constantly throughout the process reaching out to me, just letting me know they are thinking about me, because you can get lost sometimes,” Harrington said.

Harrington said he is ahead of schedule compared to the typical recovery timetable for an ACL tear, as he was available for substitution in the beginning of his senior season.

“I am still coming back a little bit earlier than they normally would recommend,” Harrington said. “Normally they recommend that you take the whole year off, but I (didn’t) want to do that. My mentality is (I want to) get up to where I feel ‘pretty good.’ I don’t think in any Division I sport you are going to feel 100 percent.”

Harrington has prior experience with adversity in soccer as his career began well before he tied up his laces for the Hornets as a freshman. By the end of his junior year of high school, he was among a select group of players chosen to join Sacramento Republic FC for their youth academy. This meant that he was training with and playing against a high level of competition day-in and day-out.

Around the same time, Harrington received the opportunity to represent his country on the U-20 Canadian National Team at the Slovakia Cup. Harrington was born in Montreal, Quebec and moved to California when he was young. Harrington said the experience of playing that level of competition in a professional stadium overseas humbled him.

“I played against Poland and Norway,” he said. “It just shows you that as hard as you are working at what you are doing, there’s still another level (above).”

Harrington said all of these experiences kept him in great playing form and better prepared him for his freshman season with the Hornets. After being selected to both Sac Republic Academy and the Slovakia Cup, he said he felt as if he could run with any competition that stood in his way.

“There were two seniors that were center backs, and they don’t rotate that much,” Harrington said. “So coming in I knew that was the case and they were talking about (having me) redshirt, but I didn’t want to do that.”

After earning a starting spot at defender in 2016, the senior played in every minute of every match in both his freshman and sophomore seasons. By the time Harrington went down with his ACL injury in 2018, he had clocked in 4,083 total minutes on the field.

Despite Harrington beginning the season primarily as a substitute, Linenberger said he knows what his captain brings to the team every time his number is called.

“Just having him in training knowing that we can bring him off the bench, he can fill in and add where (its) needed has been great for us,” Linenberger said. “It gives us depth and when we have that kind of experience and leadership on the field, it makes a big difference.”