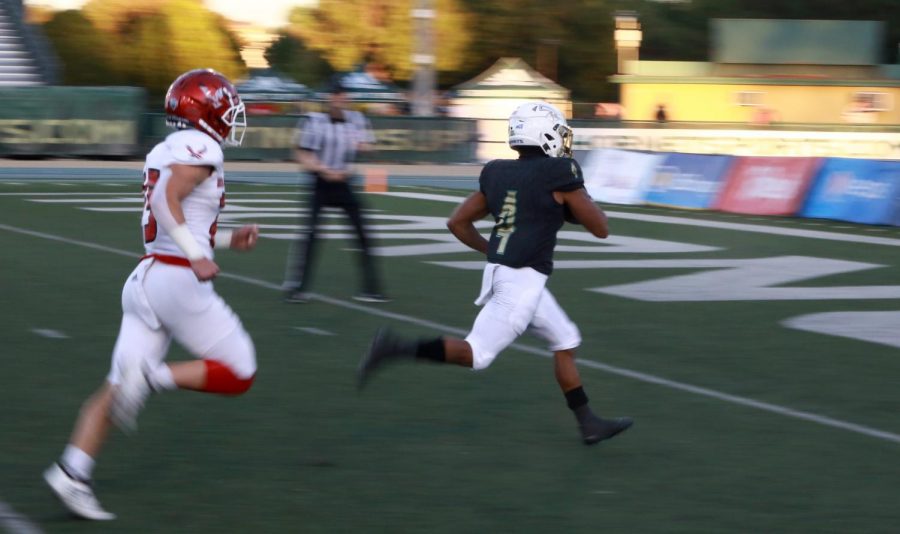 The Eagles (2-4, 0-1 Big Sky) entered the game ranked 21st in the Football Championship Subdivision Coaches Poll after a 35-20 win against North Dakota University. The Hornets (3-2, 1-0) returned from their bye week following a 34-20 loss to Fresno State.

Eastern Washington had the first drive of the night after the Hornets won the coin toss and deferred. The Eagles marched down the field in 12 plays, scoring on a seven-yard touchdown pass from junior quarterback Eric Barriere to junior wide receiver Talolo Limu-Jones.

The Hornets quickly responded with a two-minute, 75-yard drive capped off with a 41-yard touchdown catch by junior receiver Isaiah Gable to tie the game at 7-7.

Gable said that as a smaller receiver, he has to play with more effort and trust his quarterback to give him chances to make a play.

“Heart over height, that’s what I use every game,” the 5-foot-4-inch Gable said. “Small guys have to have a big heart. (I) just got to trust my guy (junior quarterback Kevin Thomson) right here. He’s the best we got. He gives me the ball and I just make a play.”

After exchanging punts on the ensuing drives, the Hornets put themselves in the lead with a one-yard quarterback sneak from Thomson.

Sophomore linebacker Miguel Garcia then intercepted Barriere’s pass on the following drive, taking it back 27 yards for the touchdown.

Barriere pulled a touchdown out of nowhere after evading the pass rush on a third down and scrambling for a 92-yard touchdown, bringing the score to 21-14, Hornets.

Midway through the second quarter, Barriere left the game for an undisclosed reason, with backup sophomore Gunner Talkington taking over at quarterback.

Talkington failed to get much going with the offense, however, completing two of his 11 passes for 27 yards. The Eagles failed to score with him on the field.

Sac State’s biggest weakness was the kicking game, with kicker Devon Medeiros missing a 34-yard field goal and an extra point in the first half, denying the team four points.

A 20-yard touchdown catch on a wheel route down the right sideline from junior running back Elijah Dotson widened the Hornets’ lead heading into halftime at 27-14.

Sac State continued to put up points in the second half when Thomson found freshman receiver Parker Clayton for a seven-yard touchdown pass.

Thomson, who finished with 315 yards and three touchdowns, said the players the team has on offense help make his job easier.

“We have Gable, (sophomore WRs) Dewey (Cotton), Pierre (Williams), (junior RB) BJ (Perkinson) and (Dotson),” Thomson said. “Just so many guys you can do all sorts of things with. I just tried to get the ball in their hands and let them make plays and they’ve been doing a great job so far.”

Barriere returned to the game in the third quarter and provided the Eagles with a spark to get back in contention. His ability to keep plays alive by scrambling out of the pocket helped Eastern Washington on many plays. His first drive back in ended with a one-yard touchdown rush by senior running back Antoine Custer.

Sac State senior defensive linemen George Obinna talked about how difficult it was to contain Barriere.

“He was shifty, he was hard to tackle,” Obinna said. “I had several good rushes against him, thought my angles were perfect and he just stepped back and burned me on the edge. He’s a good player, I give him props for that. He’s got wheels.”

Head coach Troy Taylor said that the dual-threat quarterback reminded him of an NFL superstar.

“He reminds me of Russell Wilson in terms (of) you try to contain them, you try to keep ‘em in the pocket and it’s just easier said than done,” Taylor said.

A crucial interception by freshman defensive back Tre Weed late in the third quarter set the stage for Eastern Washington to mount a comeback, but a costly hands-to-the-face penalty denied them a first down and moved them out of field goal range, forcing the Eagles to punt the ball away.

The fourth quarter saw the Eagles score on a touchdown catch from senior receiver Jayson Williams, cutting the deficit to one touchdown at 34-27, Hornets.

The Hornets responded by embarking on their longest drive of the season in terms of plays and time, running 13 plays for 75 yards in six minutes and 55 seconds, ending with a touchdown run by Thomson.

The last score of the game came when Barriere was sacked by senior defensive lineman Dariyn Choates, fumbling the ball and allowing Obinna to recover and run 66 yards for a touchdown, putting an exclamation mark on the night and sealing the game 48-27.

The two defensive touchdowns by Sac State were the most in a game since 2009.

Taylor said it was good to watch the defense perform despite being tested throughout the game.

“Those guys played their butts off, it’s fun,” Taylor said. “They were outstanding. Obviously you have your hands full with those guys. They’ve been doing it for a long time really well. Just really proud of how we hung in there.”

Sac State plays next at Montana State Saturday at 1 p.m.