PREVIEW: Sac State football team gears up for showdown at No. 6 Montana State 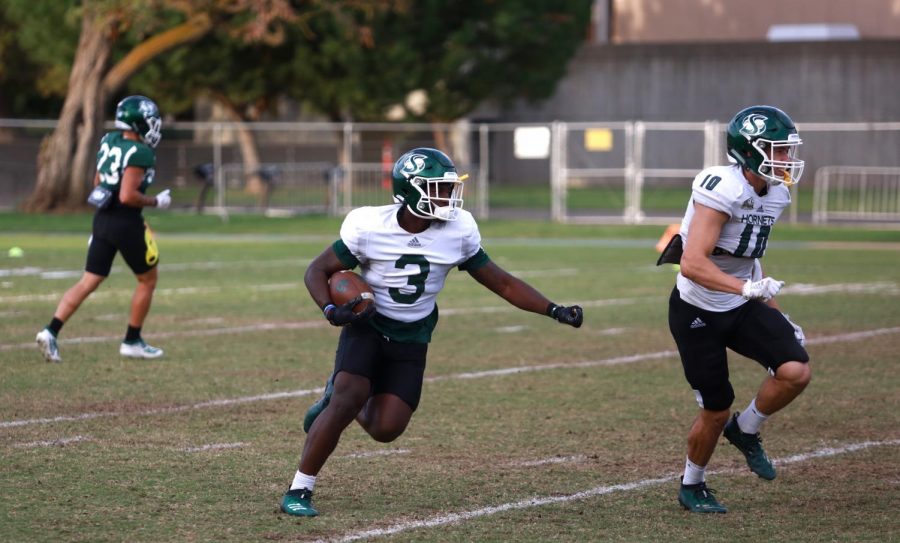 Sac State freshman running back Marcus Fulcher returns a kickoff with freshman wide receiver Parker Clayton as his lead blocker during practice Tuesday, Oct. 8 at the practice field. The Hornets play at No. 6 Montana State Saturday.

The Sacramento State football team (3-2, 1-0 Big Sky Conference) will travel to Bozeman, Montana, for their second Big Sky game Saturday against the No. 6 Montana State Bobcats.

The Bobcats are 5-1 (2-0 Big Sky) this season after surviving a late comeback attempt from Cal Poly last Saturday, escaping with a 34-28 overtime win. Montana State ranked sixth in the latest Football Championship Subdivision Coaches Poll, the second-highest Big Sky school in the rankings.

Sac State head coach Troy Taylor said that while the team played well against Eastern Washington, there are always things to improve upon.

“Every individual has things that they can get better (at) and nobody played perfect,” Taylor said. “We played well as a team, but these guys are definitely hungry to play better.”

“They’re a dynamic team,” Taylor said. “(Senior wide receiver Travis Jonsen) is a phenomenal player. They do a great job schematically creating that numerical advantage just for this run game. They’re just really well-coached and they’re (a) talented group. So it’s a challenge, but that’s what practice is for.”

Junior running back Elijah Dotson echoed Taylor’s thoughts, adding that the team just needs to focus on itself.

“We just got to go in with a chip on our shoulder,” Dotson said. “The rankings and all that stuff doesn’t really matter because another team is just going to be another team. They’re a great team, they’ve had a great history, but you know, we gotta go in there and play our game.”

As for what Sac State’s offense can do against the Bobcats, Dotson said the Hornets have to dictate the pace of the game.

“We could just push the pace a little faster, get the ball downfield faster, not have three (and) outs and I think (we’ll) be good,” Dotson said. “We’re ready for any environment, anytime.”

The Hornets have lost both of their away games this season but have held Football Bowl Subdivision opponents to minimal points until the fourth quarter.

Senior defensive tackle George Obinna said that the team can’t ride the highs and lows of the season and must instead remain consistent.

The Hornets will face off against Montana State at Bobcat Stadium Saturday at 1 p.m.