The former Hornet received a 10-day contract in March 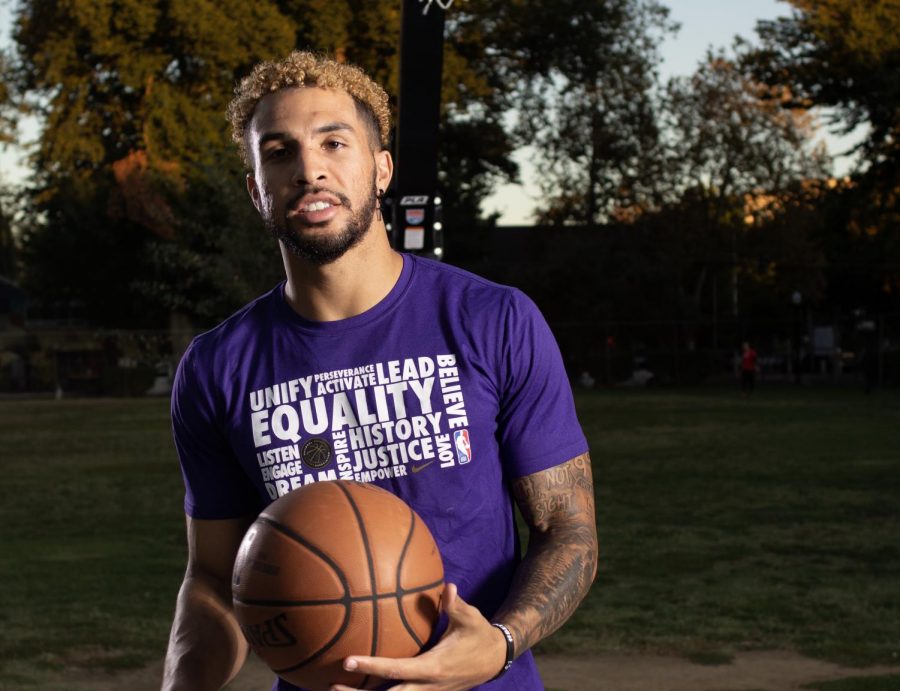 Cody Demps poses for a photo Oct. 2 at Roosevelt Park in Sacramento. Demps is the first Hornet to sign with an NBA team after signing a 10-day contract with the Sacramento Kings in March.

In March of 2019, Sacramento State had its first alumnus reach the highest level of professional basketball as Cody Demps signed with the NBA’s Sacramento Kings.

Demps, who played the maximum of four seasons with the Hornets from 2012 to 2016, was signed to a 10-day contract with the Kings.

“It’s what dreams are made of,” Demps said.

The accomplishment not only represented individual achievement but was also a milestone for the Sac State men’s basketball program. The Hornets have only been a part of NCAA Division I since 1991 and their home gym barely holds 1,000 seats.

Almost all of Demps’ basketball life can be contained within a 100-mile radius – the Golden 1 Center, the Stockton Arena, Sacramento State’s campus, Pleasant Grove High School and all the way down to his childhood home in Elk Grove, where Demps said he took his first shots on a toy hoop in his driveway.

“Ever since I was young, basketball was always my first love,” Demps told the State Hornet. “(I started) playing organized basketball when I was probably in first or second grade. It was a pretty tight-knit sports community in Elk Grove and Sacramento. If you grew up playing a sport, you basically knew most people that played that sport in this area.”

Demps said he played four sports as a kid and started traveling with Amateur Athletic Union basketball teams before he hit middle school. He was quarterback of his high school football team as well, but eventually, his first love pushed the rest of his athletic pursuits to the side.

“Going into my senior year I was pretty set on playing Division I basketball,” Demps said. “That was my goal and that was what I wanted to achieve.”

But Demps faced a challenge that is common in the area. The collegiate sports programs around Sacramento don’t have the size or scope to match up with the Bay Area or Los Angeles. Because of that, the scouting opportunities are fewer and further in-between.

“I was actually kind of disappointed because I didn’t really have any offers at that time,” Demps said. “Maybe halfway through my basketball season of senior year, Sac State offered me (a scholarship). That was my first and only Division I offer.”

Demps said he previously dreamed of playing for Stanford University, but he never got the opportunity. But he said what he ended up getting instead may have set his future up better in the long run.

“Once I started learning about Sac State and thinking about how this was a special opportunity for me to play locally, for a school that my dad went to, and have most of my family to be able to come and support me, it felt like a perfect fit,” Demps said.

His time at Sac State could hardly have gone better, Demps said. In the classroom, he earned a mechanical engineering degree. On the court, he became known for hard work and his diverse skill set.

RELATED: Demps goes from the hardwood to the gridiron

“He can play point guard, shooting guard, small forward, power forward – he can do it all,” said Marcus Graves, a former Sac State men’s basketball player who played with Demps. “He can pass, he can shoot, he can drive. I think his versatility on the court makes him so dangerous.”

“I think a lot of times kids get caught up in what position they’re playing, rather than getting better and winning,” Katz said. “Well, all (Demps) ever focused on was fitting in, getting better, winning and (saying) ‘What does the team need?’”

Demps started games in all four years and went on to crack into Sac State’s all-time top 10 lists in multiple categories including minutes played, assists and free throws made by the time he graduated in 2016.

In 2014-15, Demps started every game as the team went further than they had ever been before in conference play. They made it to the semifinals of the Big Sky tournament before losing in a close game to Eastern Washington University.

“I was actually thinking about that the other day, how close we were to being able to be the (league) champions that year,” Demps said. “I don’t like to have regrets, but if I was ever to regret one thing, it would be not getting that last win.”

His connections with the basketball program and involvement in the local sports community gave him another opportunity after graduation. He started training with local players wherever he could, including some offseason sessions with Sacramento Kings players.

“We were basically being used as extra bodies with the Sacramento Kings,” said Demps. “They appreciated my effort during those periods, so they offered me a tryout for the Reno Bighorns.”

The Reno Bighorns, now known as the Stockton Kings, is Sacramento’s G-League team, which focuses on developing players for the NBA.

Leading up to his tryout, Demps trained often with Hornet players and coaches.

“I was able to use the (Sac State) facilities, which was huge,” Demps said. “Throughout the journey, all my coaching staff has been super supportive and been behind me every step of the way.”

Demps impressed the team’s management and was added to Reno’s roster. He was suddenly on a team with NBA veterans like Marcus Williams and Matt Jones, and some of the nation’s most highly-recruited players, including six former first-round draft picks. Reno’s roster included players from Duke, Kentucky and Villanova – three of the best collegiate basketball programs in the nation.

“It’s something I had to get used to, hearing about guys that had national championships and had gone to these huge schools that sold out huge arenas,” Demps said.“Having to work hard to make it out of a small school – it’s kind of looked down upon. Coming into the professionals, they think you don’t have the best experience playing with the best guys. So there’s been a lot of doubters.”

Demps played efficiently in his first year of professional ball and ended up starting a majority of Reno’s games that year. He averaged 7.4 points and 5.4 rebounds per game with an impressive 48.4 field goal percentage.

Demps was chosen by the Kings to represent the team in Summer League play. The Summer League is a showcase of young talent and, in 2018, some of the games took place in the Golden 1 Center, which has a capacity of 17,608. It was Demps’ first glimpse at the big stage.

The Reno Bighorns moved to Stockton in the offseason of that year – even closer to Demps’ hometown. They rebranded themselves the Stockton Kings and brought Demps back for another year.

“It’s awesome being able to invite my family and friends out to (Stockton’s) games,” he said. “Every game my ticket list is pretty full. I’m always running out of tickets and asking my teammates for theirs. It’s amazing being able to have that home support. Not a lot of guys get that.”

Demps was a fixture in Stockton’s starting lineup in 2018-19, starting 42 games. He increased his averages in points, assists and steals. The improvements were enough to get Sacramento’s attention.

“Man it was amazing, getting that call from my (general manager) to come down, that the Kings wanted to sign me to a 10-day contract,” Demps said. “Being a local guy, I think that was the icing on the top. It made it that much more perfect. Not just for me, but for the Kings organization.

“I didn’t get to play, unfortunately, which was one of my goals,” said Demps. “But being there and getting that 10-day contract was more than I could have asked for and it definitely gave me more motivation to get a fully guaranteed contract and be able to stick there.”

This summer, Demps trained for the Oklahoma City Thunder and the Utah Jazz. He also played for the Indiana Pacers Summer League team. When asked if getting back with the Sacramento Kings is his top priority, Demps responded in the affirmative.

“Sacramento is my home, so that would mean a whole lot,” he said. “Any professional team that’s willing to give me a chance, I’m willing to go out and do it for them. But it would be extra special if it were in Sacramento.”

Demps told The State Hornet that he will return to Stockton this year to play for the G-League Kings again. In the meantime, Demps is still actively training with other former Hornets.

“In the summers, we work out every day together,” Graves said. “He’s a really good friend of mine and we’ll stay connected forever.”

Katz went on to discuss how his relationship has evolved over time with Demps.

“The relationship really truly begins when they’re done playing with us,” Katz said. “We always say that we’re mentors and coaches when you’re here, but when you leave, we become your friends.”

Demps shared similar sentiments and remarked on how his relationships with his coaches and teammates have bettered him.

“They’ve really been instrumental to my development as a player and as a person,” Demps said.

The alumnus said it’s been his hard work that made the difference.

“Being from Sac State, a kind of overlooked school in Division I basketball, made it clear to me that you’re not going to be given anything,” Demps said. “The extra time you put in is what’s going to make a difference in the end.”

The Stockton Kings’ season tips off November 8th against the Santa Cruz Warriors at Stockton Arena.