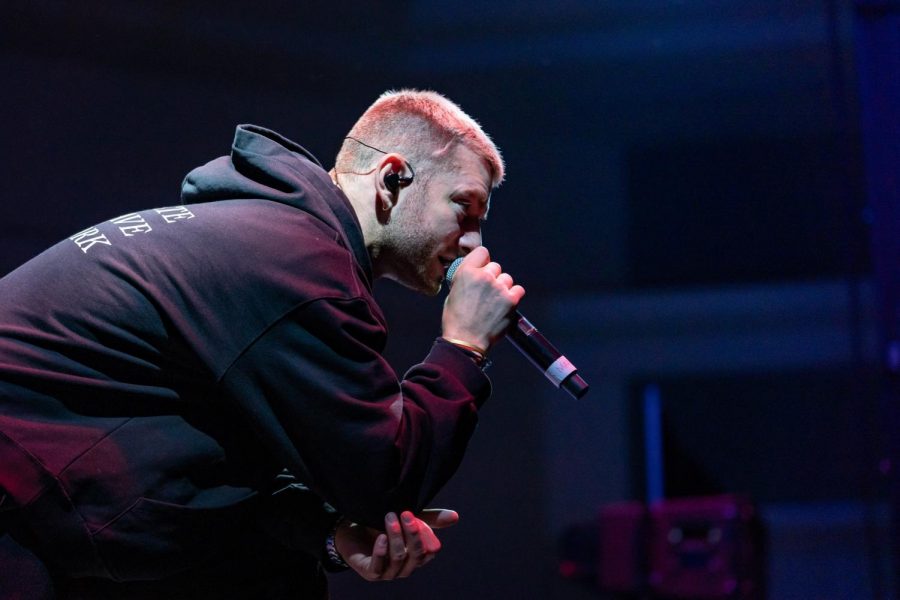 Marc E. Bassy performed for his fourth time at Sac State for a concert hosted by UNIQUE Programs Thursday, Oct. 17. Before putting out his own work, Bassy was a songwriter for artists such as Sean Kingston, Wiz Khalifa and Ty Dolla $ign.

The San Francisco-born Bassy, whose real name is Marc Griffin, has performed three previous times at Sac State, firstly opening up for rapper Sage the Gemini in 2015. Bassy came back for headliner performances in both 2016 and 2017.

Bassy released his first mixtape “Only The Poets” in 2014 after departing from pop group 2AM Club. Bassy continued as a singer-songwriter dropping albums “East Hollywood,” “Groovy People” and “Gossip Columns,” which included his hit single “You & Me” featuring rapper G-Eazy.

Last month Bassy released his five-track album “PMD,” which stands for “Postmodern Depression.” The State Hornet spoke with Bassy before his performance at Sac State.

Question: What inspires you and how does that inspiration keep you focused within your music career and life?

Answer: I’m inspired by my friends, family and the things that happen in my life on a day to day basis. I’m inspired by a lot of my relationships, romantic or otherwise, even “bromances.”

Q: You recently released your new album “PMD,” what was your creative process when putting together that album?

A: My whole life is a creative process. Every once in a while a concept or an idea just comes to me. “PMD,” which stands for postmodern depression, was an idea that came to me, it had a lot to do with the social media and (the) anxiety-ridden generation we all live in. It started with me writing songs about that, but the entire album is not about that, that was how it started and I just went with it. Once I catch a little spark, I try to take it all the way until I burn it out.

Q: Tell me about your fan base? If you had the chance to give your fans one piece of advice, what would it be?

A:  I have a slowly growing fan base, that has been rocking with me for several years now, I appreciate them a lot and if I could tell them anything I would tell them to resist the temptation to be on your phone all day.

Q: What is your creative process when making your music?

A: When I’m making music I try to be authentic, by expressing how I’m actually feeling. I don’t try to pretend I’m happy if I’m not happy or pretend like I want to party or I’m sad if I’m not. Music is like therapy to me so I can’t fake it or lie about it, I’ve tried to lie about it and it didn’t work. It starts with chords and melody, truth is in melody. It’s kind of a cliche songwriter thing to say, but it’s true, when you have something real and something that’s melodic and beautiful, that’s all you need.

Q: What goes through your mind when your performing on stage?

A: How am I fucking doing this when I’m so tired… I’m kidding, I get into this zone and I don’t really think about anything when I’m on stage, but I do try and make sure everyone’s paying attention to me for better or for worse. I try to make sure everyone in the crowd is engaged and I think that’s probably why people like me, it’s because I interact.

Bassy’s album “PMD” can be streamed on all music platforms.