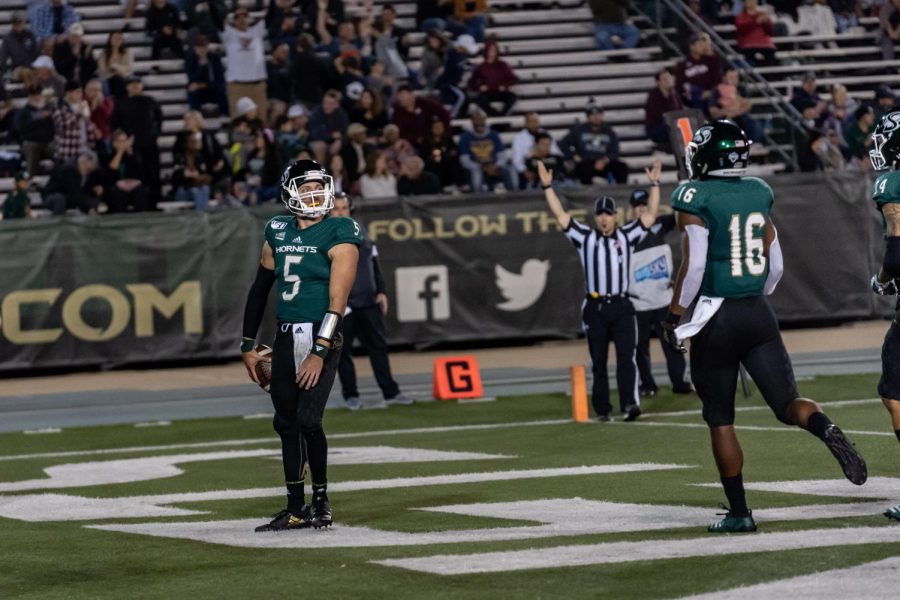 Sac State junior quarterback Kevin Thomson celebrates as he scores a touchdown against Montana Saturday, Oct.19 at Hornet Field. Thomson finished the game with a total of 2 rushing touchdowns in the win.

The Sacramento State football team continued its run of dominating performances with a 49-22 smashing of No. 5 University of Montana homecoming night Saturday.

The Hornets (5-2, 3-0 Big Sky Conference) came into the game ranked 15th in the Football Championship Subdivision STATS Poll and 17th in the FCS Coaches Poll after upsetting then-No. 6 Montana State at home last week. Sac State, led by first-year head coach Troy Taylor, was ranked in the STATS Poll for the first time since 2011.

Heading into Saturday’s game, Montana (5-2, 2-1) was ranked 5th in the STATS Poll and 6th in the Coaches Poll following a bye week.

The game started off well for Montana, with the Grizzlies scoring a touchdown on their opening drive within the first 69 seconds of the game courtesy of a 64-yard run by senior wide receiver Jerry Louie-McGee. The Hornets responded with a 44-yard touchdown reception by junior WR Pierre Williams and a successful two-point conversion, taking the lead 8-7.

The rest of the first quarter was dominated by the Hornets. Senior kicker Devon Medeiros got the team’s first field goal from 34 yards out while freshman WR Parker Clayton made an impressive one-handed catch with his left hand to set up a seven-yard rushing score for junior quarterback Kevin Thomson.

A fumble recovery for Montana in the second quarter led to a 16-yard touchdown run by senior quarterback Dalton Sneed, allowing them to get back into the game at 18-15.

A 32-yard field goal by Medeiros and a 16-yard touchdown catch by Clayton on consecutive drives allowed Sac State to pull away as Montana continued to stumble offensively, going three-and-out on two drives and throwing an interception on another.

Thomson took full advantage of the late turnover, finding Andrew Hem for a 40-yard touchdown less than a minute before halftime to give Sac State a 35-15 lead.

Thomson scored a two-yard rushing touchdown on the opening drive of the second half, making this the third game in a row where he has thrown for at least three touchdowns and rushed for at least two.

“It really starts up front with the (offensive) line just giving me so much time to sit back there and go through my reads,” Thomson said. “The guys out wide are making plays and we’re just being really efficient with our offense right now.”

Montana was given a glimmer of hope after a 32 yard run from sophomore running back Marcus Knight made it a 42-22 game. The hope was quickly erased when the Hornets responded with a 39-yard catch on a wheel route down the left sideline by junior RB Elijah Dotson just before the end of the third quarter.

Dotson, who caught eight passes and ran 12 times for 165 total yards and a touchdown, said he was having “fun” showing off his versatility in Taylor’s offense.

“It is fun playing in this offense,” Dotson said. “You always have to give credit to the offensive line because if they’re not blocking, I can’t get downfield in the first place, you know? I think it’s just fun getting out there and showing what I can do.”

That proved to be the last score of the game as the Hornets cruised through the fourth quarter to earn a 49-22 victory, only the second win in 22 games against the Grizzlies. Sac State’s last win against Montana came in 2011, the last time the team was ranked.

The Hornets only drew one penalty during the game, earning praise from Taylor.

“He literally puts us in the right places at the right time,” Choates said. “He knows each one of his players and I love coach Thompson for that. He lets everybody get some.”

“We’re just being really efficient with our offense right now.”

Sac State should expect another rise in the FCS polls come Monday having beaten three ranked teams in a row, possibly into the top 10. With the win Saturday, the Hornets defeated three ranked FCS opponents in one season for the first time in program history.

Next week, the Hornets are back on the road as they face Cal Poly San Luis Obispo. Taylor said that the Mustangs’ style of play will bring up unique challenges for the team.

“They are very hell-on-wheels with what they do offensively,” Taylor said. “You go from this offense in Montana where they can throw it and run it, and then you go up to Cal Poly where they run the triple (option). It’s a new challenge. So we enjoy it tonight and then, just get right back to work.”

The Hornets play the Mustangs in San Luis Obispo next Saturday at 5:05 p.m.