Sac State football team matches up with No. 5 University of Montana 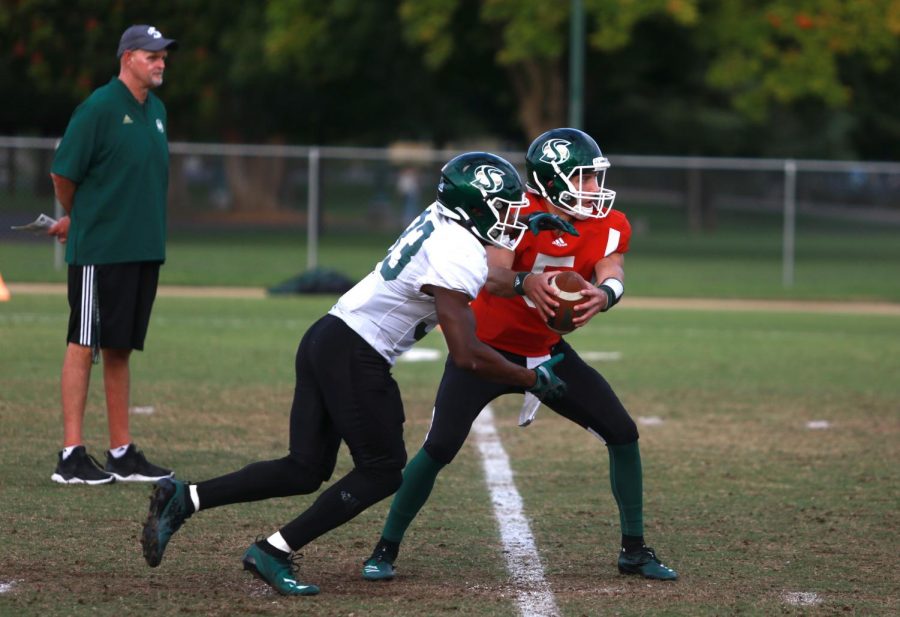 Sac State junior quarterback Kevin Thomson hands the ball off to junior running back Elijah Dotson during practice Oct. 8 at the practice field. The No. 15 Hornets play No. 6 Montana at Hornet Stadium Saturday night.

The No. 15 Sacramento State football team will attempt to remain perfect at home and in Big Sky Conference play when they host No. 5 University of Montana Saturday night for homecoming.

For just the second time in program history, Sac State (4-2, 2-0 Big Sky) remains undefeated after two games of conference play. The Hornets were victorious at home against then No. 21 Eastern Washington 48-27 Oct. 5 and on the road against then No. 6 Montana State 34-21 Saturday.

“Going on the road, there are obviously going to be some challenges,” Sac State head coach Troy Taylor said about his team’s performance at Montana State. “Our guys played great, we only committed two penalties and those were both on me so we build on that.”

The Hornets are ranked in the Football Championship Subdivision Top-25 Poll for the first time since 2011. At No. 15, the 2019 Hornets have the second-highest ranking in program history, according to Hornet Athletics. Saturday’s matchup with Montana will be the second game in program history that Sac State hosts as an FCS Top-25 team.

Thomson was named the Big Sky Offensive Player of the Week Monday following the upset victory at MSU.

“Kevin is making great decisions,” Taylor said. “He’s very accurate, he’s taking care of the football and it’s all about his preparation. We’re also doing a great job of protecting him.”

Keeping their quarterback upright has been the key to the Hornets’ early-season success on offense. Thomson has been sacked six times this season, the least of all quarterbacks in the Big Sky.

Furthermore, all six sacks came in the Hornets’ two losses this season, both against Football Bowl Subdivision opponents. Thomson has not been sacked by an FCS team this season.

“All of our success on offense starts up front,” Thomson said. “It’s awesome playing behind my offensive line right now. They’ve got to be the best unit in the Big Sky by far in my opinion.”

Sac State’s offense ranks second in the Big Sky with 39 points per game. The only team ahead of them is their opponent Saturday night.

Entrapping the Grizzlies attack will be a challenge for a Hornets defense that’s surrendering just 20 points per game.

“They are good, but we’re never really worried about the opponent,” Sac State senior defensive lineman Dariyn Choates said. “We just want to be the best version of ourselves against anybody we play against.”

Choates ranks first in the Big Sky in forced fumbles this season with three and ranks third in tackles for loss with nine.

Montana will be returning to action following their bye week. The Grizzlies last played Oct. 5 at home in a 59-20 win over Idaho State.

Sac State will attempt to beat Montana for just the second time in 22 attempts. However, the Hornets’ lone victory came in 2011 in Sacramento when the team was last ranked in the FCS Top-25. Last season, the Grizzlies narrowly defeated the Hornets 41-34.

The Hornets will celebrate homecoming Saturday against Montana at Hornet Stadium with kickoff scheduled for 6 p.m.