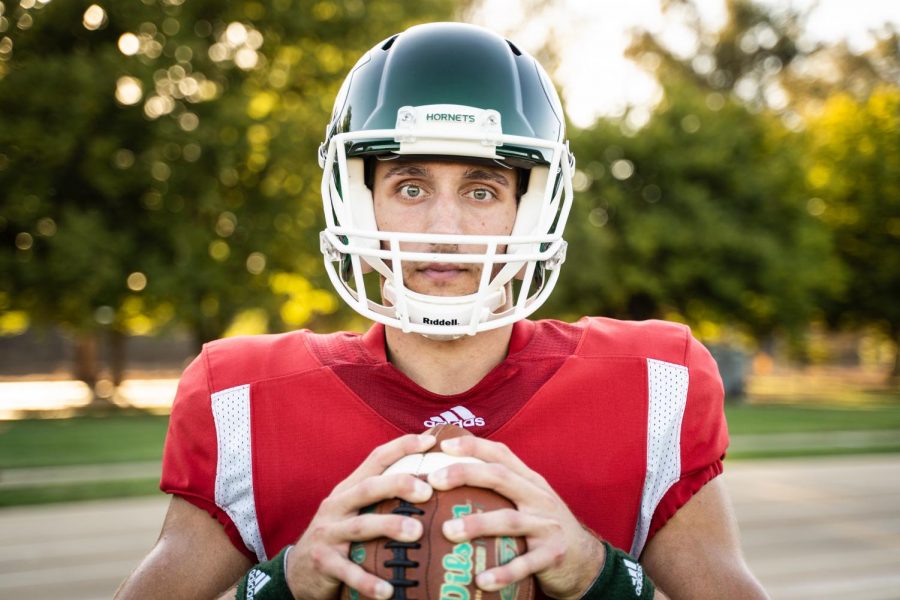 Football can be an up-and-down game, but for Sacramento State junior quarterback Kevin Thomson, the sport is “the ultimate team game.”

“Nothing beats going out there and going to battle with your teammates and coming out of it with a W,” Thomson said. 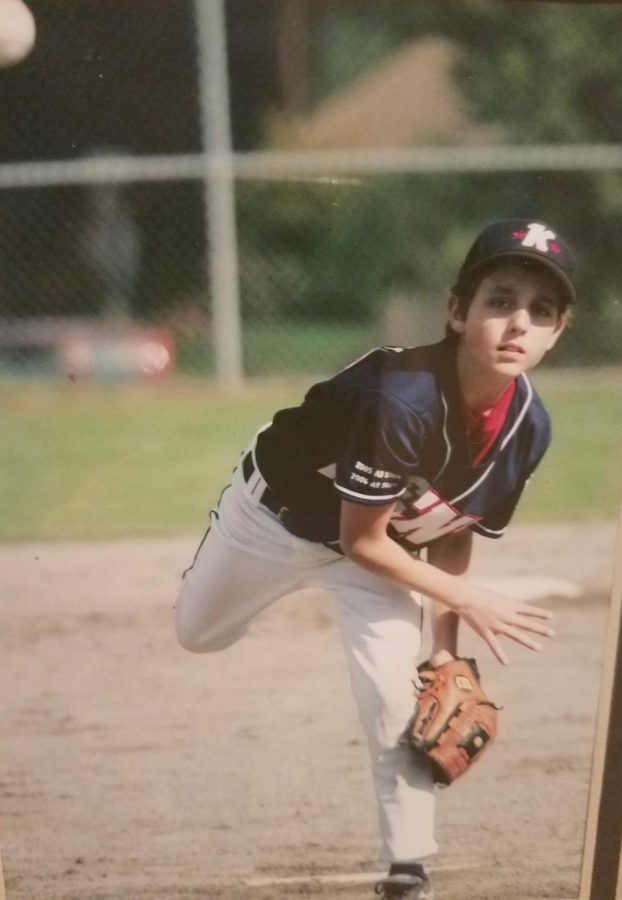 Courtesy of Kevin ThomsonSac State junior quarterback Kevin Thomson throws a pitch while playing Little League as a child. Thomson is now in his third year as starting quarterback for the Hornets.

“I was a baseball kid growing up so I always dreamed of playing in the MLB and thought I was going to play college baseball,” Thomson said. “But then, after my junior year of high school I kinda fell in love with football and was like, ‘I want to see where this takes me.’”

Thomson got his start as quarterback on a friend’s flag football team, even though he initially lined up at a different position.

Thomson had originally wanted to play wide receiver, but the coach needed a quarterback and asked Thomson to give it a try.

“My dad played in high school, so I said sure,” Thomson said. “Ever since then I just kinda like tossing the football around.”

Thomson’s father Jim Thomson said he and the rest of the Thomson family have supported his son in whatever way they can.

“We’ve made sure that he had great training and coaching to the best of our ability,” Jim Thomson said. “One of us has probably been to every game he’s had.”

Despite being a quarterback himself, Jim Thomson said that he prefers to let his son be coached by the team and camp staff.

“I don’t think we try to give him too much advice,” Jim Thomson said. “I think that he’s a big kid. I’ve been to a lot of Kevin’s camps and observed and watched a lot of that training. We rely on his coaches and whatnot to give him the advice, schooling and coaching.”

But that doesn’t mean that he wouldn’t hesitate to point something out on game day.

“I’d be lying to you if I said that I didn’t give him advice, but it’s all things that are in the moment and things that come to my mind as I watch him play,” Jim said.

Thomson said while he doesn’t model his playing style after anyone in particular, he does like the style of NFL stars Aaron Rodgers and Russell Wilson.

“Aaron Rodgers is great because he can throw from all different angles, off his back foot (and) he’s really good at making throws from all over the place,” Thomson said. “Russell Wilson just has great leadership ability and skills. I think the way he goes about doing things is exceptional for the quarterback position.” 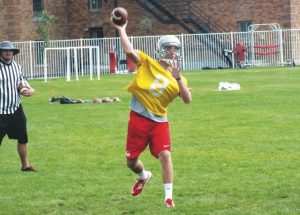 Courtesy of Kevin ThomsonSac State junior quarterback Kevin Thomson throws a pass while at UNLV as an underclassmen. Thomson was granted two additional years of eligibility by the NCAA during the offseason due to an injury while at UNLV.

Out of high school, Thomson ended up committing to the University of Nevada, Las Vegas in 2013 over the University of Idaho and New Mexico State University. He spent most of his time at UNLV recovering from Tommy John surgery, redshirting in 2014 and spending 2015 as a reserve.

Thomson said that despite not playing for the Rebels, it was a learning experience, albeit one that tested his love for the game.

“I really had to dig deep and decide, ‘Do I really want to keep playing football?’” Thomson said. “Luckily I think it made me grow closer with my parents and they always had faith in me as a football player and as their son and supported me through the whole thing.

Another person who came to Sac State around the same time as Thomson was junior running back Elijah Dotson.

Dotson outlined what he looks for in a quarterback and how Thomson fills that role.

“What I look for in a quarterback is a guy that’s literally the coach’s right-hand man,” Dotson said. “The quarterback should be able to lead the team (and) bring everybody together just like a coach and lead us to victory. Kevin’s a great teammate. He’s one of those guys that isn’t too serious, but you know when he’s got to get the job done, he’ll get it done for sure, and that’s what I love about him.”

After Jody Sears was fired following the 2018 season, Troy Taylor was named the next head coach and brought in a nearly brand-new coaching staff with him. One of the new members of the staff was quarterbacks coach Bobby Fresques.

Fresques said that he looks for many different qualities in a quarterback, including leadership and the ability to retain information.

“He’s gotta be a guy who leads by example. First one in, last one out of the building,” Fresques said. “It’s a big responsibility that they take. They gotta be sharp (and) able to retain a lot of knowledge. They gotta be able to work and draw from past experience.”

When talking about Thomson, Fresques said that he was different from other quarterbacks since he had many years of experience already. 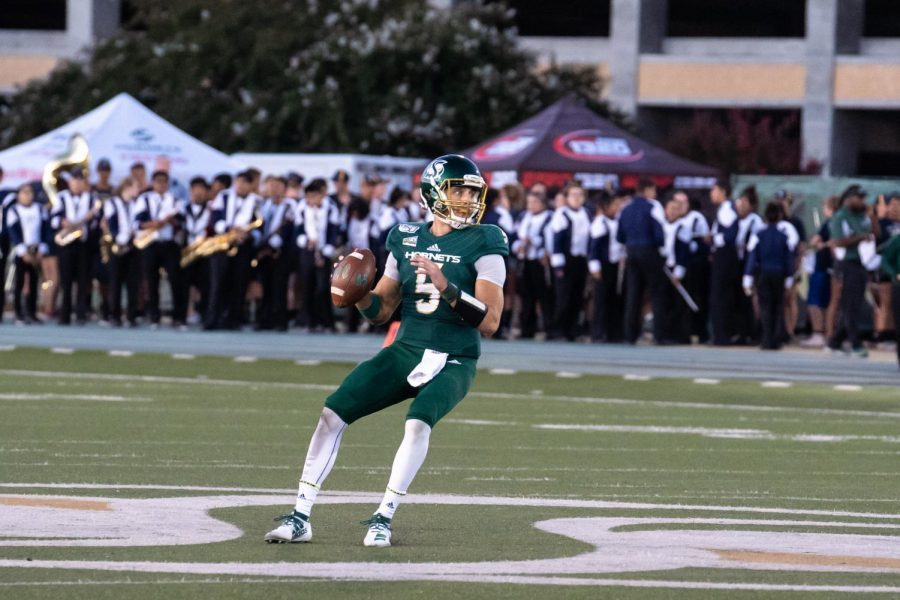 Eucario CalderonSac State junior quarterback Kevin Thomson prepares to throw a pass against Northern Colorado on Saturday, Sept. 14, at Hornet Stadium. If Gov. Gavin Newsom signs SB 206, players like Thomson will be able to profit off their likeness.

However, Fresques said he enjoys working with Thomson at the end of the day.

“He’s kinda like an onion with some different layers,” Fresques said. “But once you get through, you know, he’s a sharp kid. Dry sense of humor, but very sharp. His football intelligence is very high so I like working with him.”

Thomson was granted an extra two years of eligibility from the NCAA before the 2019 season, stemming from the two seasons he spent at UNLV recovering from surgery.

Through four games this season, Thomson has completed 95 of 153 passes for 1,160 yards, 13 touchdowns and two interceptions. Five of those touchdowns came in the 50-0 shutout win against Northern Colorado.

“I had fun playing in both offenses since I’ve been here, but this one just feels really natural for me as a quarterback,” Thomson said. “I feel really comfortable. Coach Taylor really focuses on correcting my mistakes and letting me go with the flow.”

While Thomson said he loves his time on the field, he also said he does make sure to take time off and rest in between games.

“I just hang out with my friends and relax when I can get my mind off football,” Thomson said. “Sometimes we’ll go to the river for a little swim, I like to get my tan on. Sometimes we’ll play volleyball and if we’re not doing that, we’ll just hang out at the house and watch a movie.”

Dotson also shared some insight into what Thomson is like away from the field.

“We always text each other and joke around a lot, he’s a great dude,” Dotson said. “A lot of people wouldn’t think he’s funny, but he is.” 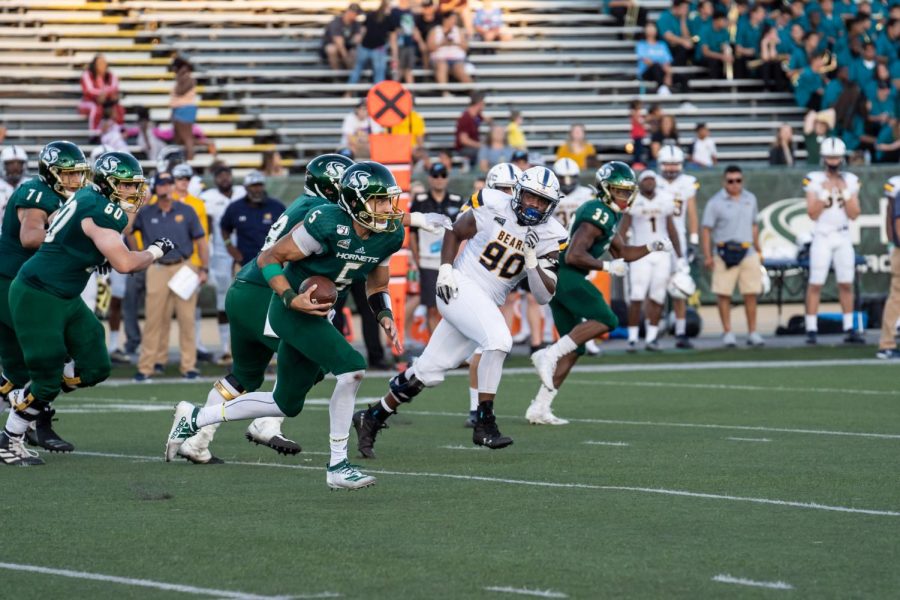 Eucario CalderonSac State junior quarterback Kevin Thomson rushes for a first down against Northern Colorado on Saturday, Sept. 14, at Hornet Stadium. The Hornets play on the road this Saturday at Fresno State.

Playing professionally is a dream for a lot of college athletes, and Thomson is no different.

“I’d love a chance to play in the NFL or (elsewhere) post-college and see where it takes me,” Thomson said. “But right now, I’m just focused on this season. But I do have aspirations of playing at the next level.”

Thomson does have a plan for a career if becoming a professional quarterback doesn’t pan out. He graduated from Sac State with a degree in communication studies in spring and is currently enrolled in a master’s program for educational technology.

“I’d love to be in administration somewhere, maybe in a school and still kind of stick around the athletic scene somehow,” Thomson said. “I’d like to still be involved in athletics whether that’d be in high school or college perhaps. But you know, I’m still kind of weighing my options as far as what my future holds.”