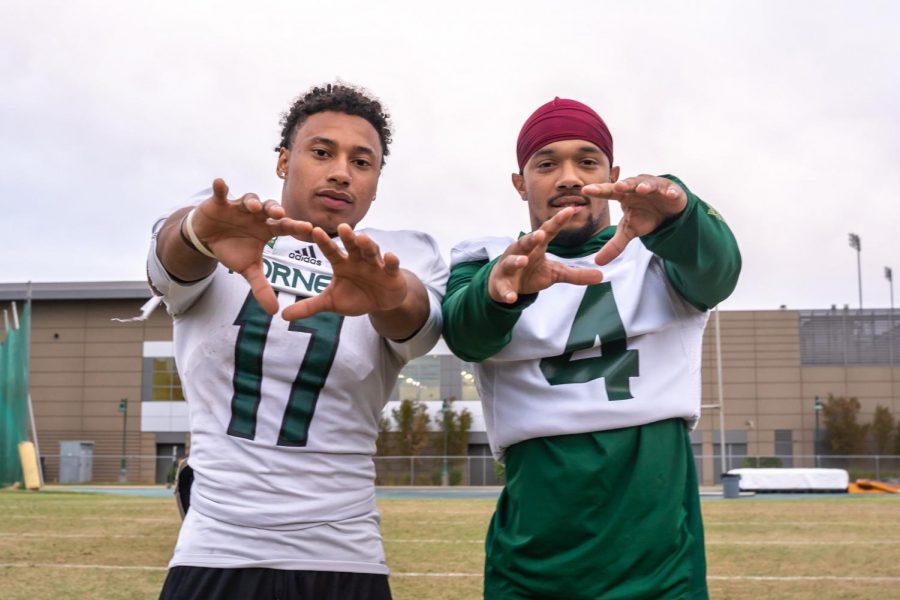 Sacramento State wide receivers sophomore Dewey Cotton and junior Isaiah Gable pose for a photo Wednesday, Oct. 16 at the practice field. Gable and Cotton both come in at 5-feet-4-inches tall on the team roster, eight inches shorter than the average height for college receivers.

When people think about playing wide receiver in football, they think about their speed, route-running skills and catching ability – the latter of which is usually determined by height.

The average height for a Division I college receiver is around 6 feet tall, according to Next College Student Athlete (NCSA) Recruiting. But height doesn’t mean much if you can’t perform.

Sacramento State wide receivers Isaiah Gable and Dewey Cotton say they believe their talent more than makes up for what they lack in height.

Gable and Cotton both come in at 5-feet-4-inches tall, according to Hornet Athletics. Both players have become an integral part of the team’s receiving corps this season.

Head coach Troy Taylor described some of the qualities the two bring to the team.

“They’re so good with the ball, there’s not two players in this league that have the quickness and change in direction that those guys have,” Taylor said. “Really tough guys, both really smart guys that always know the right thing.”

Gable came to Sac State as a running back who racked up over 2,700 rushing yards in high school. After a redshirt year in 2016 and two seasons with moderate success, Gable was moved to wide receiver for his junior year.

“They moved me to the receivers this spring,” Gable said. “I just work hard, listen to what (wide receivers) coach (Tyler) Osborne is teaching you and (do) everything. It’s all just hard work.”

In seven games this year, Gable has 20 catches for 250 yards and two touchdowns. He has also seen some action at running back with five rushes for 48 yards. However, the junior didn’t play in the most recent home game Oct. 12 against then-No. 5 Montana due to a lower leg injury.

“I’ve got that chip on my shoulder,” Gable said. “Everybody just thinks ‘he’s small.’ You just gotta play like you’re the biggest man on the field.”

Cotton was recruited in 2017 from St. Mary’s High School in Stockton, where he finished as the school’s all-time reception leader with 174 catches for 2,703 yards.

He redshirted in 2017 and spent most of the 2018 season as a special teams player, returning six kicks for 119 yards.

Cotton said he doesn’t believe that his height is a disadvantage for him compared to the next player.

“I don’t believe in that. Yeah, people can be stronger, but you can’t hit what you can’t catch,” Cotton said. “So in ways that I am disadvantaged, I also have advantages and so I don’t really believe in this disadvantage stuff. I just shy away from that.”

Through eight games as a sophomore, Cotton has recorded 11 catches for 99 yards and a touchdown. He has also been utilized on special teams with 13 punt returns for 106 yards.

Cotton said that while he hasn’t reached his peak yet at Sac State, he still has plenty of time to do so.

“I feel like I have to work harder than any receiver, regardless of how big or small he is,” Cotton said. “My goal is to be the number one working receiver anywhere I am. I’m on the way, but I’m not there yet. I have a lot to learn and I have years to do that.”

Osborne detailed the group of players he works with and what attributes he looks for in a receiver.

“It’s a big position, so I have a lot of kids in that room,” Osborne said. “Obviously a bunch of different types of kids from different backgrounds and different styles. A big thing is speed and the ability to catch the ball. Those are two things that I’m always looking for in guys. I’m very blessed with the guys that we have here.”

Osborne was quick to describe what makes both Gable and Cotton special players.

“Those guys give tremendous effort,” Osborne said. “They care a lot and they’re always out here. They’re probably two of the best practice players on our team. They do a lot of great things.”

“Obviously, people look at their size and stuff like that, but they play a lot bigger than they are.”

With so many receivers competing for playing time and receptions, Gable and Cotton have both seen time at running back, with the two combining for eight rushes and 55 yards.

Since the duo both have experience at running back, Osborne said that they can be utilized in a number of different plays.

“Obviously they have speed, they have quickness, they have the ability to kind of be like a little running back out there in the slot,” Osborne said. “We’ll give them some sweeps or a fake sweep and do a play-action (play) with it. They’re great assets for us because we can do more than just throwing the ball in space. We can hand it off to them, we can pitch it to them, we can line them up in the backfield and things like that.”

Taylor agreed with Osborne, complementing the work ethic that Gable and Cotton possess.

“They’re pretty versatile, so we move them around a lot,” Taylor said. They’re both two of our hardest workers. There’s no question in the weight room, out on the field, in practice. Those are guys that always do the right thing.”

Cotton said he’s looking forward to getting more plays on the field.

“I’m ready to get in space and get moving,” Cotton said.

As the two settle into their roles on one of the most exciting Hornets teams (6-2, 4-0 Big Sky Conference)in recent years, Gable continues to operate under the same mantra.

“I go with heart over height, all the time,” Gable said.