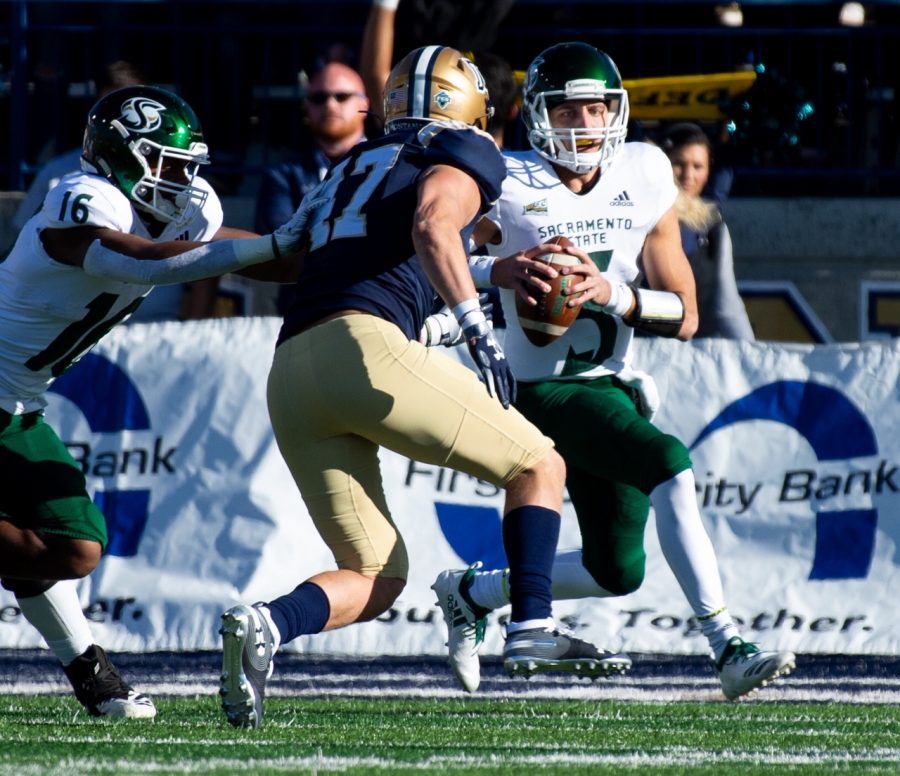 The Sacramento State football team scored touchdowns on five straight possessions to take a commanding lead and keep it Saturday, as the Hornets beat No. 6 Montana State 34-21.

With the win against the sixth-ranked Bobcats Saturday, the Hornets set a new program record for the highest-ranked Football Championship Subdivision opponent defeated by Sac State in program history. The victory also marked the first time the Hornets won on the road in Bozeman since 1991.

“That’s a really good football team, we knew they were physical up-front,” Sac State head coach Troy Taylor said in a post-game press conference. “You don’t get the full effect from video.”

A failed fourth and one attempt by the Bobcats during the first quarter gave Sac State good field position and the Hornets capitalized by scoring the game’s first touchdown.

MSU’s offense responded as senior wide receiver Travis Jonsen capped off an eight-play, 86-yard drive with a 17-yard touchdown run, ending the first quarter with both teams knotted at seven.

The Bobcats ran for 104 yards in the first quarter, the most by any Sac State opponent in a quarter this season. The Hornets allowed 37 yards rushing for the rest of the game, for a total of 141, well below the Bobcats average of 265 rushing yards per game.

Coming into the game, Sac State’s rushing defense was ranked first in the Big Sky, as was MSU’s rushing offense.

After being forced to punt on their opening possession, the Hornets scored touchdowns on their next five possessions.

Junior quarterback Kevin Thomson completed 23 of his 30 pass attempts for 260 yards and three touchdowns. The junior has thrown three or more touchdown passes in five of six games this season.

“Kevin does a good job of getting rid of the ball,” Taylor said. “We’ve protected him pretty well all year. If we can protect our quarterback, we have a pretty good chance of being successful.”

Thomson also led the team in rushing Saturday as he finished with 74 yards on 11 carries, no sacks and two touchdowns.

“We went three-and-out on the first drive so that was tough,” Thomson said in a post-game press conference. “But then after that, I think we just executed really well offensively. Everyone was doing their job.”

In the second quarter, Thomson completed a 13-play, 75-yard drive with a 1-yard rushing touchdown. On the next offensive possession, Thomson connected with junior wide receiver Pierre Williams for a 7-yard touchdown pass. Sac State led 21-14 at halftime.

A 6-yard touchdown run by the Bobcats with 15 seconds left in the first half was the last success its conference-leading rushing attack had in the game.

“Just good preparation,” Sac State senior defensive lineman George Obinna said in a post-game press conference on how Sac State limited MSU’s run game. “We did what we had to on defensive, everybody executed and that’s what it came down to.”

Obinna finished with two sacks in the game and now ranks third in program history with 26 sacks in his career.

The Hornets took control of the game in the third quarter after scoring 14 unanswered points to make the score 34-14.

Thomson threw two touchdown passes in the quarter, connecting with junior running back BJ Perkinson for a 6-yard touchdown and freshman tight-end Marshel Martin for a 26-yard touchdown.

Junior running back Elijah Dotson caught six passes in the game, bringing his team-leading reception total to 39 this season.

The Hornets will face another test and look to make it three games in a row next week with a matchup at home against No. 8 Montana.

Sac State will celebrate homecoming Saturday at 6 p.m. against the Grizzlies at Hornet Stadium.