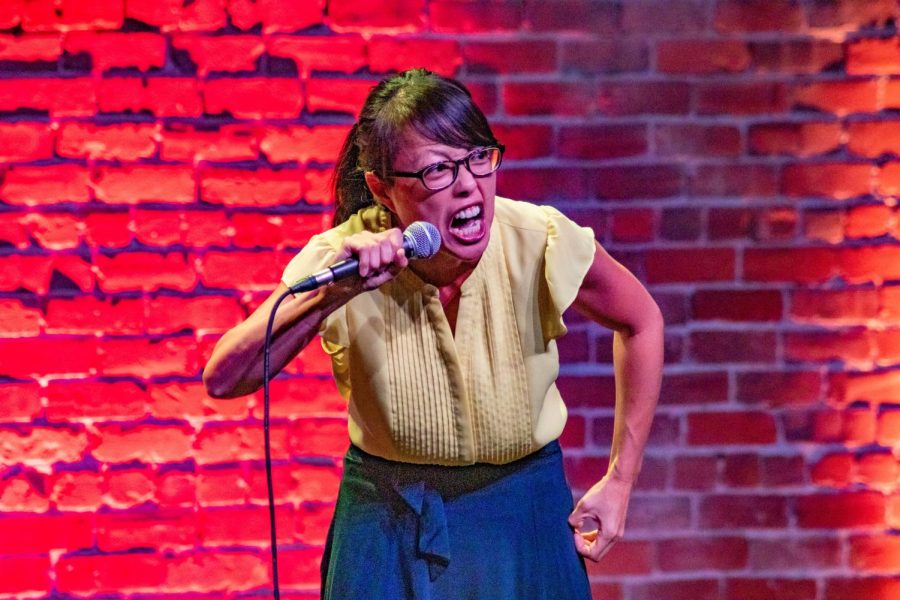 Pauline Yasuda, San Francisco Comedy Competition finalist, performs during the semifinals at the El Rey in Chico on Sept. 17, 2019. Sac State will host a round of the competition's finals in the University Union Ballroom Thursday.

Sacramento State will host a round of the finals for the San Francisco Comedy Competition in the University Union Ballroom Thursday.

This is the competition’s 44th year, and over 30 of those competitions over the last three decades have included a stop at Sac State, the event’s producer John Fox said.

“A major goal of the comedy competition is to test contestants in every imaginable arena most will want to master during their careers,” Fox said. “Sac State also provides the challenge of a large meeting hall that is not necessarily designed for performance art.”

When asked why the event is good for Sac State students, UNIQUE Programs Advisor Ajamu Lamumba said “UNIQUE is all about building a community at Sac State. We try to plan events that bring students together and a comedy show is a good way of doing that.”

Each contestant will have a 15-to-20 minute long set where they will try not only to make Sac State students in the audience laugh, but to impress three to five judges as well.

“These acts have been battling for two weeks, during which time they’ve honed their acts down to their essence in order to take full advantage of the limited time allowed on stage,” Fox said. “Having said that, Sac State will be the first night during which these contestants will be doing longer sets. So there could be some surprises in what they offer up.”

The San Francisco Comedy Competition has long been a platform for up-and-coming comedians to put their skills to the test, and has helped the careers of notable names such as Ellen DeGeneres and Robin Williams.

“I had known about this competition my whole life as it is widely respected and well-known in the Bay Area,” said Gina Stahl-Haven, a finalist in the competition. “A friend of mine in comedy told me he thought I should apply. I thought the chances were slim, but decided to go for it.”

Haven has been involved with improv and comedy for most of her life and says that Sac State students can expect to be laughing all night when the other finalists and herself hit the stage.

Clay Newman, another one of the five finalists, started off in theater but began to gravitate toward comedy in recent years.

“Stand-up obviously satisfies the urge to perform, and has the added perk of not having to do 3 months of rehearsals in order to do so,” he said.

On his motivation for participating, Newman, a San Francisco native, said “There’s definitely a point of pride repping the Bay Area on this bad boy since such beastly comics come in from out-of-town to partake.”

The competition will take place at 7:30 p.m. and admission is free for everyone.