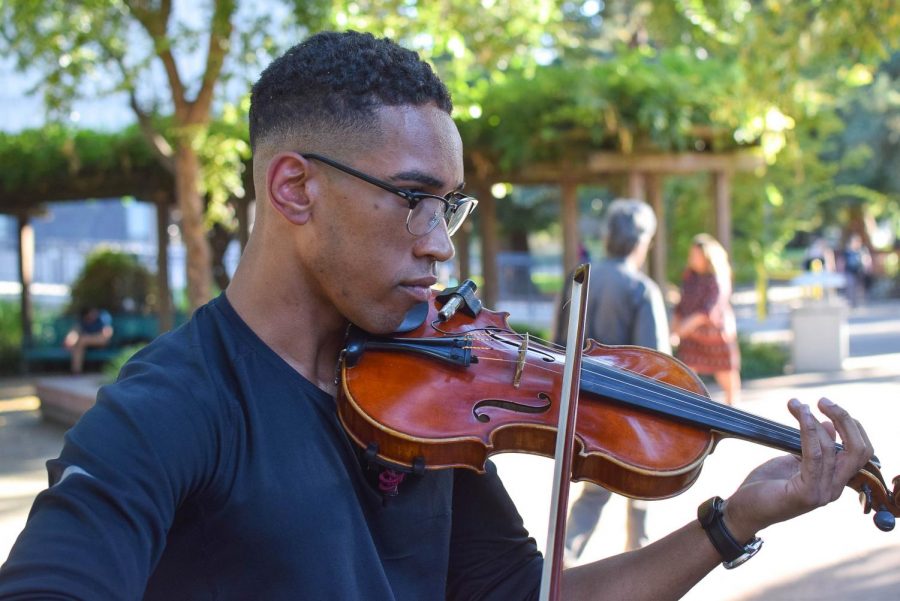 Matthew Major plays the violin in the Library Quad at Sacramento State on Sept. 23, 2019. The Matthew Major Inception Quintet, a jazz group comprised of Sac State music students, will be performing at UNIQUE Programs’ Wednesday Nooner in the Serna Plaza.

Matthew Major, a 20-year-old violin performance major from San Leandro started his musical journey at the age of 6. For 14 years, he has practiced daily not only violin but the electric bass and piano as well.

As a musician and a student, Major found a way to balance his school, social life and physical health all while nurturing his musical growth.

“I just do it,” Major said. “I wake up at 5 a.m., I work out, I do my morning classes, I eat food and then I do all my music stuff in the afternoon into the night.”

Major formed the Inception Quintet about a year ago and the group is listed as a student combo in the jazz study program at Sac State.

“Even though we’re a combo, I call it a band because we do performances that we get paid for,” Major said. “I take it so much more seriously than just a simple combo, a school combo that only does school performances.”

Major actively searched for musicians to play specific instruments to help him form the band. As of now, the Inception Quintet consists of Matthew Major on violin, Jackson Riley on saxophone, Bryant Whaley on bass, Dawson Nichols on drums and Antonio Silva on guitar.

Major describes his band’s sound as unique, soulful and spirited. Performances are often improvisatory and involve the musicians building off of one another’s sound.

Major says that he hopes to continue performing as much as he can throughout his lifetime.

“My dream was to become a performer worldwide, or even just nationally,” Major said. “If I could get gigs across the country in New York or Miami, I’ll take that. But really I just want to perform, perform, perform.”

After Wednesday’s nooner, The Matthew Major Inception Quintet have several other gigs coming up. They plan to perform at Capistrano Hall on Oct. 11 and Dec. 4, at the Sheraton Grand Hotel on Oct. 17 and at Luna’s Cafe & Juice Bar on Nov. 8.

The Nooner event is free to students and the public.