SB 24 would provide abortion pill at Sac State in 2023 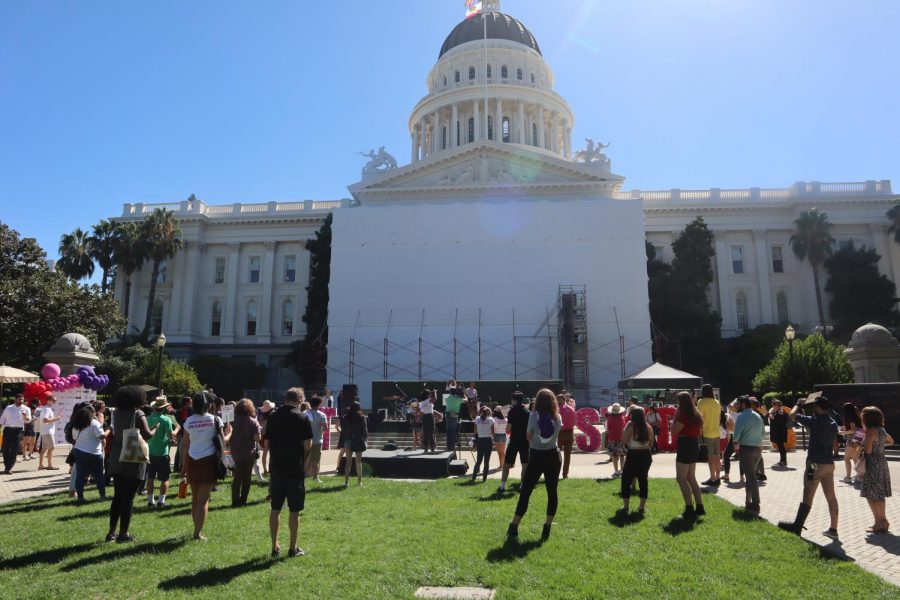 California college students and Senator Connie Leyva rallied in support of abortion care on public college campuses such as Sacramento State at the Capitol building in Sacramento Tuesday. Abortion care would be available for students at CSU and UC campuses starting in 2023 if the bill is signed.

California college students and Senator Connie Leyva rallied in support of abortion care on public college campuses such as Sacramento State at the Capitol building in Sacramento Tuesday.

Leyva co-authored Senate Bill 24 or the “College Student Right To Access Act,” which would offer non-surgical medical abortions to students on California State University and University of California campuses if signed into law.

The rally came just days after the Assembly Appropriations Committee passed the bill. SB 24 was passed in the Senate earlier this year and is now headed to the Assembly.

The process, colloquially known as the “abortion pill,” would be available for students at CSU and UC campuses starting in 2023 if the bill is signed by California Gov. Gavin Newsom.

“We introduced this bill because we know it is the right thing to do and medical abortion care will become the new normal,” Leyva said.  “Many of you will no longer be on campus in the coming years but you will be a legacy for future generations with access to this care.”

Leyva co-authored a similar bill in 2017, Senate Bill 320, which former Gov. Jerry Brown vetoed in October of last year. In his veto statement, Brown said, “because the services required by this bill are widely available off-campus, this bill is not necessary.”

Leyva was joined at the Trust Students rally by her co-authors, Senator Toni Atkins and Los Angeles Assemblymember Wendy Carillo.

Trust Students was organized and sponsored by the justCARE campaign for campus healthcare.

“The choices that we make as women are sometimes hard,” Atkins said. “We are the ones who should get to make this decision.”

Lizz Winstead, comedian and co-creator of the satirical news program, “The Daily Show,” also spoke in support of the bill.

“This bill is a no-brainer and all the government has to do is say yes,” Winstead said.

Zoe Murray, a UC Santa Barbara alumna, said she faced “a lack of community and stigma,” after an aborted pregnancy.

“Not every student can afford to miss their classes or their jobs to receive abortion care,” Murray said. “SB 24 will destigmatize abortion care by creating space for students and providers they trust.”

Students and activists in attendance expressed their support for the potential legislation.

Elena Denecochea, a Sac State alumna with a degree in women’s studies, said she was encouraged by the rally’s attendance.

“We have a lot of people here, from students to political activists to medical providers,” Denecochea said. “It’s inspiring to see the support from different facets of life.”

Denecochea said she was optimistic for the bill’s prospects.

“Signing SB 24 was one of Governor Newsom’s campaign promises,” Denecochea said. “We are closer than ever.”

Lindsay Collins, a Sac State alumna with an interior design degree, said, “It’s mind blowing how hard it is for women to be given the rights to our bodies that we deserve.”

Musical acts also performed at the rally, including Sacramento rock bands Mallard, Yo And the Electric, and Los Angeles singer Victoria Elise.

In a previous version of the story, Zoe Murray’s name was misspelled as ‘Zoey’ it has since been corrected.