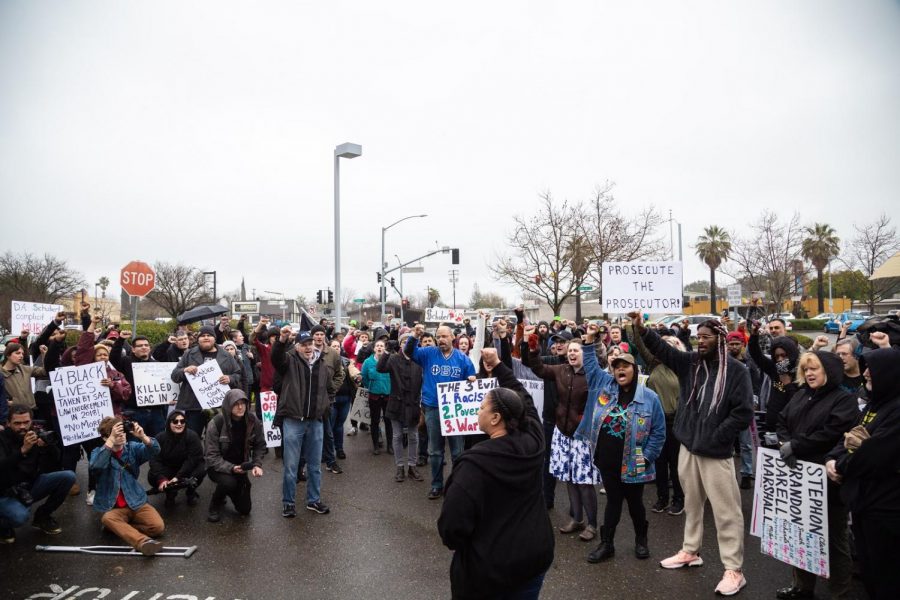 Protestors outside of the Sacramento Police department in March demanded responsibility from the Sac PD for the officers who shot Stephon Clark a year prior. Clark’s children were awarded a $2.4 million settlement from the city on Wednesday.

Stephon Clark’s two children were granted a $2.4 million settlement with the city of Sacramento Wednesday, according to a declaration filed by an attorney representing the minors.

Clark’s children, referred to as A.C. and C.C. in the declaration, are 5 and 2 respectively. The siblings are being represented by attorney Brian Panish from the law firm Panish Shea & Boyle LLP.

“Minors A.C. and C.C. suffered damages and loss as a result of the death of their father, Stephon Clark, the minor plaintiffs is [sic] deprived of and will continue to suffer a deprivation of their familial relationship with their father,” Panish said in the declaration.

The children will each receive over $893,000 after attorney fees. A portion of funds will be put into tax-free structured settlement annuities and the rest into trusts, at the request of their grandfather and guardian, Rajneesh Manni.

Structured settlement annuities involve taking money earned in a settlement and distributing the money over time.

The settlement was originally agreed upon between the Clark family, the city of Sacramento and the officers who shot Clark in June, but needed approval from the city council, according to Panish.

“We’re grateful for the outcome. However, the money will just never replace the life that was taken from us,” said Stevante Clark, Clark’s older brother.

The settlement comes over a year after Clark was shot by police in the Meadowview neighborhood of Sacramento on March 18, 2018. Police said that they mistook Clark’s cellphone for a gun. The shooting sparked protests throughout the city, including at Sacramento State.

In March of this year, Sacramento County District Attorney Anne Marie Schubert announced that she would not pursue charges against the two Sacramento Police officers involved in Clark’s death, Terrance Mercadel and Jared Robinet.

Again, protests erupted throughout the city and activists demanded a change.

One change protestors focused on was the passage of Assembly Bill 392, co-authored by California assemblymembers Shirley Weber and Kevin McCarty. The bill restricts police use of deadly force to only be permissible when it is deemed “necessary” and was signed by California Gov. Gavin Newsom in August.

RELATED: California assembly bill may change when police can use deadly force