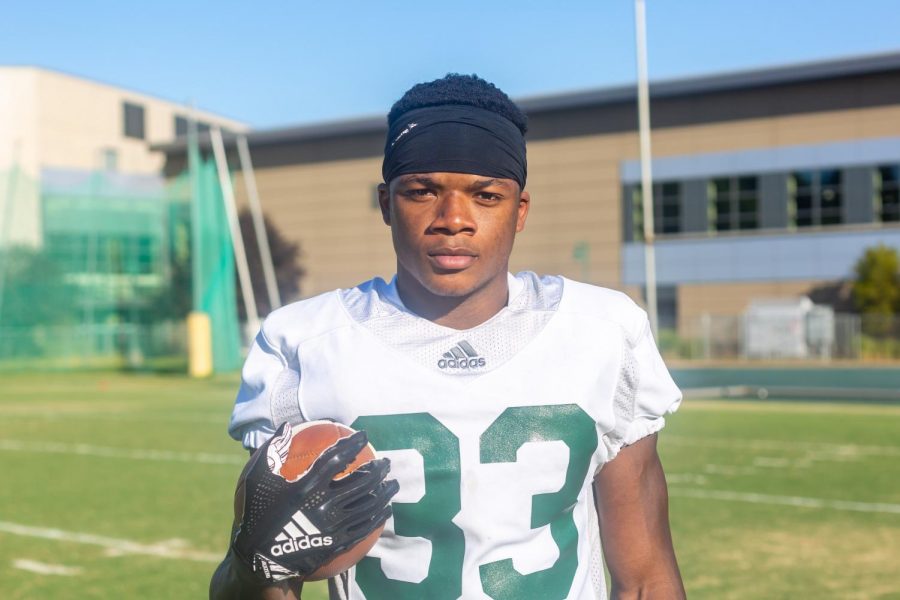 Elijah Dotson, Sac State junior running back, poses for a photo after practice on Wednesday, Sept. 4, at the practice field. Dotson was named to the All-Big Sky first team in 2018, becoming the first Hornet RB to do so since 2000.

In just two years at Sacramento State, junior running back Elijah Dotson has compiled numbers and accomplished feats many players wish to see over the course of their entire college career.

Dotson has a singular goal for the 2019 season: winning games.

“That stuff doesn’t really matter,” Dotson said. “I just feel like I have to prove myself every single year and whatever happens, happens.”

Dotson’s individual success was a bright spot in 2018 for a football team that ended the season on a seven-game losing streak. The Hornets finished with a 2-8 overall record and did not win a single Big Sky conference game.

The Hornets came into the 2018 season with high expectations following a 7-4 campaign in Dotson’s freshman year and the disappointing season prompted a change in leadership for the football program and moving on from head coach Jody Sears, who spent five years at Sac State. New head coach Troy Taylor was hired in November to be the leader the Hornets need to start winning games.

RELATED: Jody Sears Q&A: What went wrong at Sac State — and what’s next

Dotson, a 2017 Antelope High School graduate and Sacramento native, was more than familiar with who Taylor was. Taylor spent four seasons as a co-head coach at local power Folsom High School. From 2012-2015, the Folsom High Bulldogs went 58-3, winning four straight section championships and one state title.

Dotson recalled the success the Bulldogs had during his high school career, which made him eager and motivated to work with Taylor this season.

“I was excited because I knew what type of coach he was,” Dotson said. “Coach Taylor wants it all and he goes for everything. You can obviously see that through the legacy that he left at Folsom. Just by seeing that, I knew he’s a perfectionist and he wants to win.”

The junior running back stepped in as a true freshman in 2017 and immediately left his mark on the Sac State football program. As a freshman, Dotson led the team in all-purpose yards with 1,017 in total, rushed for 475 yards and finished with seven touchdowns.

Despite all the individual accolades, the coveted goal of winning has eluded Dotson and he feels a sense of urgency to change that immediately. The junior running back believes a culture must be built in order for the football program to elevate to the level he desires.

Listen to Sacramento State running back Elijah Dotson talk about his main goal for the season in an interview with me earlier this week. Story to come. @SH_Sports @TheStateHornet pic.twitter.com/AHNnQewscb

Taylor has already received help establishing a tradition according to Dotson. Taylor’s message to his team is one that’s bigger than just playing the game of football.

“He’s established a tradition of love,” Dotson said. “What you have to understand is if you love the guy that’s next to you, you’ll run through a wall for them.”

That type of team chemistry and camaraderie is hard to establish for most sports teams, but the 6-foot, 185-pound running back is doing his part to make sure the Hornets display a high level of care for each other at all times.

As a leader on the team, Dotson pushes and motivates his teammates through his actions and constantly displays a work ethic that leads to success on the field, according to his teammates.

“(Dotson) is one of the hardest workers on the team,” Kevin Thomson, Sac State’s starting quarterback said. “He’s not one of those guys that’s going to say a lot. He’s not one of those guys you’re going to see on social media or see running his mouth really during the games, he just works his tail off. I love that as a player, those are the kind of guys I want on my team and out there playing with me.”

Dotson’s approach hasn’t resonated with just his teammates but his coaches recognize the unique work ethic he exhibits daily as well, according to James Montgomery, Sac State’s running back coach.

Montgomery, the only coach from the Jody Sears era to be retained by Taylor, has been Dotson’s coach since his arrival to Sac State in 2017.

“As a leader, he brings it every day,” Montgomery said. “He leads by example and when he needs to get vocal, he does.”

According to Montgomery, Dotson has not let any of the previous success go to his head

“He’s always been that guy that leads by example,” Montgomery said. “The best thing about him is that he’s super humble. If you’re in our meeting room or around him, you’ll never know who the best guy in the room is.”

Dotson has the same goal most Division I football players do – make it to the NFL. However, the junior running back is aware that dream is something he can’t solely depend on.

As a psychology major, Dotson understands the importance and power of networking and being personable. The junior running back has made sure to position himself for future success on or off the field.

“Of course I want to go further with this football thing,” Dotson said. “But if football doesn’t work out, I want to know I have something else to fall back on. If you just learn how to (get to) know people, you’ll always find a job somewhere.”

The junior running back has a plan for the future, but as of now, his goal is simply to do whatever it takes to help his team win football games.

For Dotson, success on the field is not just important for this season.

“I want us to accomplish a tradition where winning is always expected,” Dotson said. “That’s my team goal, just have a tradition and (have) our tradition be (about) winning and caring (for) each other.”