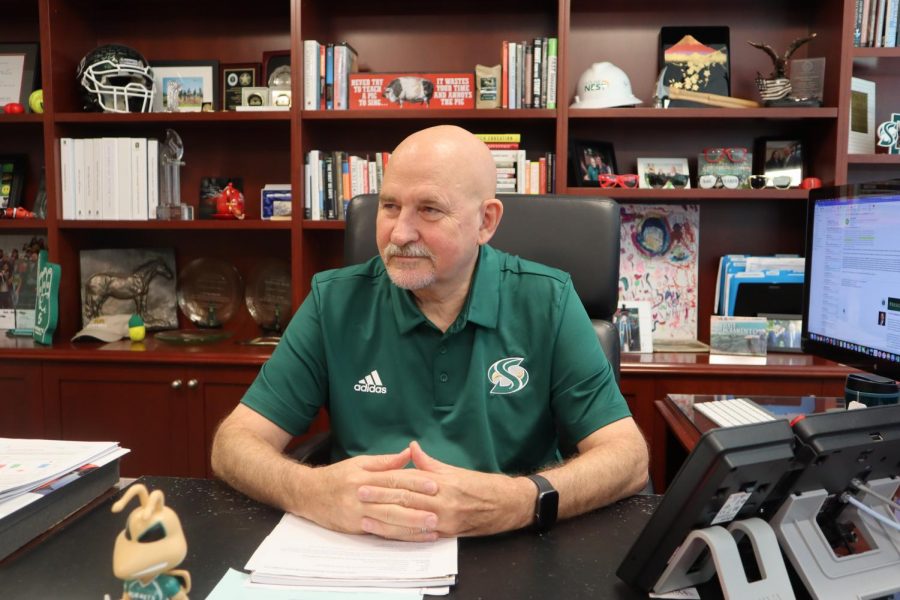 Sacramento State President Robert Nelsen has only been in Sacramento since 2015 but has shown love and appreciation for all athletic programs since his first day on campus.

Not only has Nelsen personally made an impact on each individual athlete, but he has made an effort to make the programs stronger and bring the community together.

“There is a metaphor out there that says that sports are the front porch for the university,” Nelsen said. “They are a way to bring people on to the university and to make people interested in it so that’s part of it, but a big part of it is the student athletes.”

Nelsen has prioritized the importance of the athletic programs because he believes athletes are putting their time, bodies and full dedication towards the school.

“Those students are out there competing for us (and) representing Sac State,” he said. “I think it’s very important to be there, respect them, and support them.”

Nelsen has made it a priority to try and have a personal relationship with athletes on campus. Senior volleyball player Sarah Davis has taken notice.

“It’s really cool knowing the president of our school is going to be there to support us and a majority of our athletics,” she said. “I notice him at a lot of the sporting events cheering loud. It’s just really nice to see him walk in and be a part of our games.”

Another way Nelsen has continued to grow personal relationships with athletes is through his famous “Stingers Up” celebration. This signature gesture means a lot to the athletes on the court or field.

“I think it’s awesome,” said Davis. “It brings everyone together and gives us a lot of energy. It’s kind of the staple of Sac State and when he does it, it is really powerful and means a lot to us.”

Something that has stood out to some athletes about Nelsen’s participation with the programs is that he has made it a priority to attend games and provide support for all teams, not just the well-known ones.

Senior gymnast Tara Catour has personally experienced this with his attendance at the gymnastics meets.

“It shows that he’s giving us his support,” Catour said. “My sister was a gymnast at (The University of) Oklahoma and I have never heard of presidents going to gymnastics meets. So it just shows he’s doing so much more than other presidents are doing at other universities.”

At the first football game of 2019, Nelsen held a brief ceremony for all police, in honor of slain Sac State alumna and rookie police officer Tara O’Sullivan. Nelsen also gave out over 400 tickets to the game for officers to attend.

“I thought it was very moving and it brought lots and lots of people there,” Nelsen said.

While president at Sac State, Nelsen has assisted in making many improvements and advancements to all athletic programs.

“We have a new (athletic director in) Mark Orr. He has brought a lot of energy and professionalism into our program,” Nelsen said. “We have a lot more presence on the web now in social media and I think that’s a really big improvement.”

The president isn’t stopping there, with a goal held close to his heart to continue to advance and grow the athletic programs at Sac State. To conclude a sit-down interview with The State Hornet, Nelsen had just two final words.