Benji Kikanovic breaks out of scoring drought with hat trick 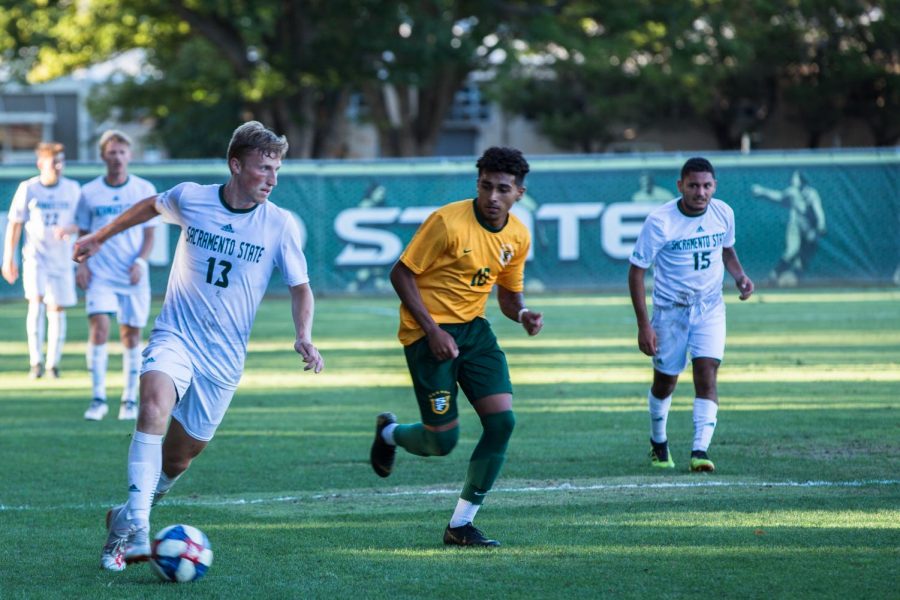 The Hornets got off to a fast start against the Dons. Thanks to two through balls by Sac State sophomore forward Arath Chavez, Kikanovic scored twice in the first half to give the Hornets a 2-0 lead.

With just five seconds left in the first half, USF junior defender Shayan Charalaghi headed the ball into the lower right corner of the net to cut the Hornets’ lead down to one headed into the second half.

At the beginning of the second half, Sac State sophomore midfielder Oscar Govea converted a penalty kick in the 52nd minute to make the score 3-1.

Charalaghi scored his second goal of the game in the 62nd minute, thanks to an assist by his teammate, freshman midfielder Jaidon Reynolds, to cut the Hornets’ lead back down to one.

Sac State sealed the 4-2 win in the 66th minute when Kikanovic dribbled past USF’s goalkeeper and scored an uncontested goal to complete his hat trick. The four goals scored by the Hornets Thursday were a season-high for 2019.

Thursday’s performance was a welcome sight for Kikanovic, who was held scoreless this season until Thursday.

Kikanovic credits his performance to just doing the simple things first and then everything starting after to go his way after that.

Even though the Hornets won the game Thursday, there are still areas that need to be fixed according to head coach Michael Linenberger.

“We had too many moments where we were a little bit lethargic and a little bit sloppy,” Linenberger said. “The goal right at the end of the first half was an example of that. You credit USF, a really good free-kick and a good finish. But I thought we were sloppy to even give them that opportunity. I thought that happened periodically in the first and at times in the second half.”

Linenberger hopes to address and correct the Hornets’ weaknesses by watching tape with the team and showing them plays in which they were flat-footed and lagging behind on defense.

“It starts in practice, we just got to give it our all,” Andres said.

Linenberger echoed the same sentiments as his players about how to improve.

“We need to work harder in practice,” Linenberger said. “Also, we think we should have scored another goal or two, so we need to continue to get better on the offensive end. Our goal going into every game is to give up no more than one goal a game, so giving up two today is not good enough and we have to address that issue as well.”

The Hornets’ next game is against the University of Pacific at 4 p.m. Sunday at Hornet Field.