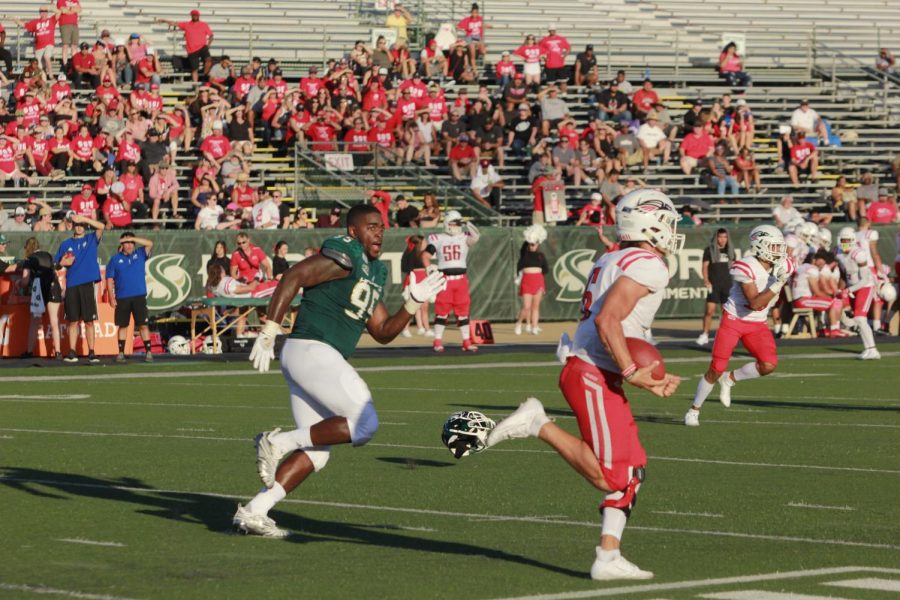 Sac State senior defensive lineman Dariyn Choates sprints after the Raiders quarterback after his helmet falls off against Southern Oregon on Saturday, August 31 at Hornet Stadium. The Hornets went on to win the game 77-19 and broke several records.

The Sacramento State football team got the Troy Taylor era off to the best possible start with a record-breaking 77-19 drubbing of Southern Oregon University Saturday.

The Hornets took advantage of playing a National Association of Intercollegiate Athletics (NAIA) school by running away with the victory.

The 11 touchdowns and 77 points were school records, eclipsing the previous record of nine touchdowns and 76 points set back in 1968 against the University of San Francisco. The 685 total yards are the second-most in school history, falling 9 yards shy of the record set against Montana State University in 2014.

The Raiders opened the scoring with a 19-yard touchdown pass before gifting Sac State great field position after a failed onside kick attempt.

Junior quarterback Kevin Thomson took advantage of this by breaking out on two separate rushes, totaling 50 yards and ending with a 24-yard touchdown. A two-point conversion put the Hornets on top 8-7.

Head coach Troy Taylor praised the team for not letting the early score unsettle them.

“It was good to see your guys respond on the sidelines,” Taylor said. “There’s going to be adversity every game and obviously we responded well.”

Once getting the lead, the Hornets never looked back. Two interceptions on their next two drives allowed Sac State two more touchdowns courtesy of junior running back Elijah Dotson (one receiving), moving the score to 21-7.

Southern Oregon did manage to claw back some points at the end of the first quarter with a 46-yard field goal, but they had no answers for Sac State’s offense.

In the span of eight minutes, the Hornets had found the endzone three more times, extending its lead to 42-10 before rounding out the first half with a 49-13 scoreline.

Senior defensive back Allen Perryman, who got an interception and a team-leading six tackles, said that being aggressive on defense allowed the Hornets to be aggressive on offense.

“We just wanted to come out and just play our game, just be dominant on defense,” Perryman said. “We came out and got punched in the mouth, but then we just responded and made plays and ended up getting four turnovers.”

After halftime, Sac State cruised home, pulling several starters. But the scoring didn’t stop after that as several players made the most of their time by adding touchdown after touchdown, eventually ending with a final score of 77-19.

Thomson had a great game, completing 14 of 20 passes for 303 yards and four touchdowns before sitting midway through the third quarter. Thomson also rushed for 90 yards and a touchdown. He was quick to praise the new offensive system Taylor has introduced.

“I love playing in this offense,” Thomson said. “It’s really quarterback friendly. It was a fun offense to learn and we are starting to feel really comfortable with it.”

One of Thomson’s preferred targets was sophomore wide receiver Pierre Williams, who racked up 140 yards on five catches for three touchdowns, the most by a receiver in a single game since 2015. But he was hesitant to take all the praise without mentioning his teammates.

“I feel like it’s just a team effort and it’s not just me,” Williams said of his performance. “It takes 11 people to do the job so I can do it the way I can do it.”

Taylor said that he wanted the team to play with aggressiveness and more tempo and thinks they have done well to establish that.

“The tempo is going to be fast, especially if we get a first down,” Taylor said. “It’s really kind of a mentality for our whole team and what we wanna do. We want to play without fear and with a lot of confidence. But with humility too. So I was proud of how our guys handled all that.”

While the team won big, it drew some comparisons to last year where the team won its first game and lost eight of its next nine. But Taylor wouldn’t be drawn into predictions or comparisons.

“I can’t speak to last year and I’ll say that all we can do is move forward and these guys have been great,” Taylor said. “We’re not projecting or predicting. We had fun tonight and we’re going to get after it tomorrow.”

The Hornets’ next game is Friday at PAC-12 school, Arizona State University.