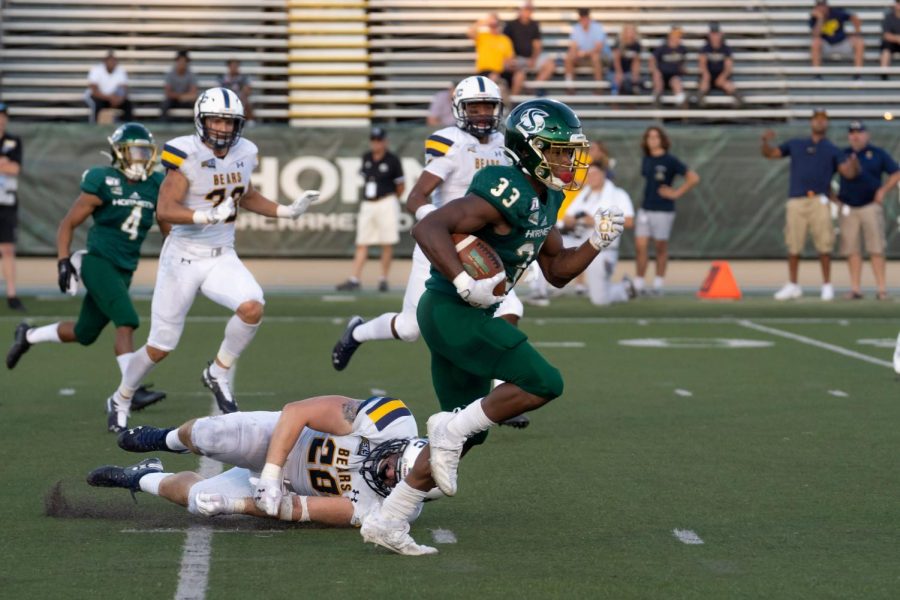 Sac State junior running back Elijah Dotson runs over the Bears defense against Northern Colorado on Saturday, Sept. 14 at Hornet Stadium. Dotson had a total of 158 yards receiving and one touchdown in the win.

Sacramento State’s football team held the University of Northern Colorado to 171 total yards and zero points while the offense put up 614 total yards in a 50-0 home blowout win on Saturday night.

For the second straight week, the Sac State (2-1) defense lead the charge. However, the Hornets stout defense received help from the offense in a big way.

The third-year starter was not sacked once in the game.

The Hornets got the scoring started early. Thomson connected with junior running back Elijah Dotson for a 31-yard touchdown pass four minutes into the game.

Back-to-back missed field goals from the Hornets and a second-quarter Thomson interception stalled the next few drives for the Hornets, but the team responded ferociously.

On the next offensive possession following the interception, Thomson led the Hornet offense on a 99-yard drive over four plays in just 51 seconds. Thomson again connected with Dotson, this time on a shovel pass that the junior running back took 88 yards into the Bears red zone.

The junior quarterback followed up the big play with a 10-yard touchdown pass to junior wide receiver Isaiah Gable. The Hornets took a 22-0 lead into halftime.

The Sac State offense continued to show no mercy in the second half as the team put up 21 third-quarter points, extending the lead to 43-0.

The Hornets’ defense allowed the UNC offense little traction. The dominant defensive performance led to Sac State’s first shut out since 2011, also against the Bears.

Sac State had just one sack in the game, but it was a big one as senior defensive back Marcus Bruce hit the Bears’ quarterback, forcing a fumble and a big third-down stop. The big-hit by Bruce not only caused a turnover but knocked the UNC starting quarterback out of the game.

“We got good players,” Taylor said. “We’re not doing anything that’s not based on having good talent. We got really good players, they play really hard and then we have an extraordinary defensive staff.”

The Hornets are not content after the blowout win at home as senior defensive tackle Dariyn Lashon said he is ready to get back to work for the next game.

“Everything that we did, after tonight it’s done,” Lashon said. “Sunday we got weights, we got treatment and we get our bodies ready for next week. Our goals are bigger, we’re looking at the long run.”

Sac State is back on the road next week as the Hornets play at California State University, Fresno next Saturday at 7 p.m.