OPINION: ‘Borderlands 3’ lives up to its successful counterparts

Help defend the world of Pandora in your fight against evil 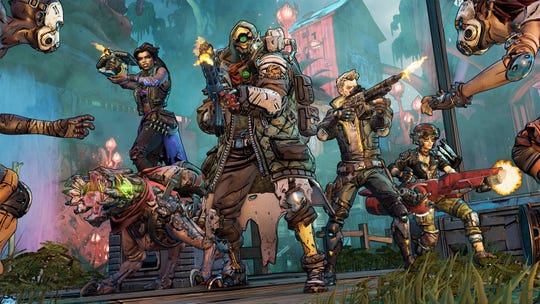 The main characters of "Borderlands 3." The game released Sept.13 featuring four new unique playable characters, and a refinement of the series' signature mechanics.

“Borderlands 3,” the ironically fourth installment of the “Borderlands” video game series, was recently released and it is mesmerizing in every way.

“Borderlands 3” is a first-person action role-playing game, set in the world of Pandora, where the player takes the role of a “Vault Hunter,” part of a resistance group called the Crimson Raiders, under the current leader Lilith.

Lilith is a siren, a group of mystical people of unknown power, who saved Pandora in the previous game “Borderlands 2.”

It has been seven years since “Borderlands 2” and if you’re like me, your blood was probably pumping when you heard about the release of “Borderlands 3.”

When the game was released last Friday, whether you downloaded it or opened the package and inserted the hard copy disc, you were likely jumping with excitement.

The intro cutscenes place you back in time seven years ago to the good old days. The “Borderlands 2” graphics and visuals are somewhat the same but overhauled to be more refined.

An introduction to the four main characters of “Borderlands 3” leaves you in awe of the sheer differences in playstyle of these four characters. The “Borderlands” series has never been one to tie down the limits of a character. You can always find yourself doing a mission that makes you comfortable and fits your needs.

Amara is the game’s siren, whose powers make for a more aggressive playstyle, as she brawls against her enemies.

Fl4k is the game’s hunter. He lives to seek out his prey and as a beastmaster, has various animal companions that will fight alongside you on your journey through Pandora.

Moze is a gunner who uses her mech suit “Iron Bear” to help her in battle and survive.

Last but not least is the most mysterious character Zane, who specializes in combat gadgets ranging from a self clone to a sentinel that flies around protecting him from above.

The antagonists are a brother and sister duo named Troy and Tyreen Calypso, who are also sirens.

They plan to open the “Great Vault” and release “The Destroyer” who was locked away so he couldn’t, well, destroy the world. The Calypso twins plan to drain The Destroyer’s power and become gods.

Throughout the story and the progression of the main missions, the character you choose and the characters on your journey become a part of your family.

The in-depth development and character evolution is outstanding. The game’s witty, sometimes dark humor really makes you sit there and laugh throughout the game.

Although some lines may get repetitive, it does not take away from the overall great experience of hearing an enemy character’s last words, telling you to “eat my ass” before they get blown to pieces.

“Borderlands 3” is a great game for everyone, whether you are new to the series or a fan who keeps coming back for more or somewhere in between.

The character development and the bonds one makes with the individual characters is unlike any other game.

Some games tend to get stale after you complete the first playthrough, but “Borderlands 3” adds multiple other modes after completion to increase replayability.

These modes include “True Vault Hunter” and three versions of “Mayhem” all of which increase the difficulty of the game and its bosses and the power of the loot you get from completing the missions.

Once you defeat these high skill cap bosses. the adrenaline-pumping feeling makes you want to keep coming back and grinding the game over and over again.

There are many different experiences one may take away from this game, from happy to sad and every once in a while, slight anger due to the sheer difficulty of the game. But somehow, the game finds a way to make you want to keep playing.

This newest installment in the “Borderlands” series is just a small piece of the puzzle showing what Gearbox and 2K games are capable of doing.