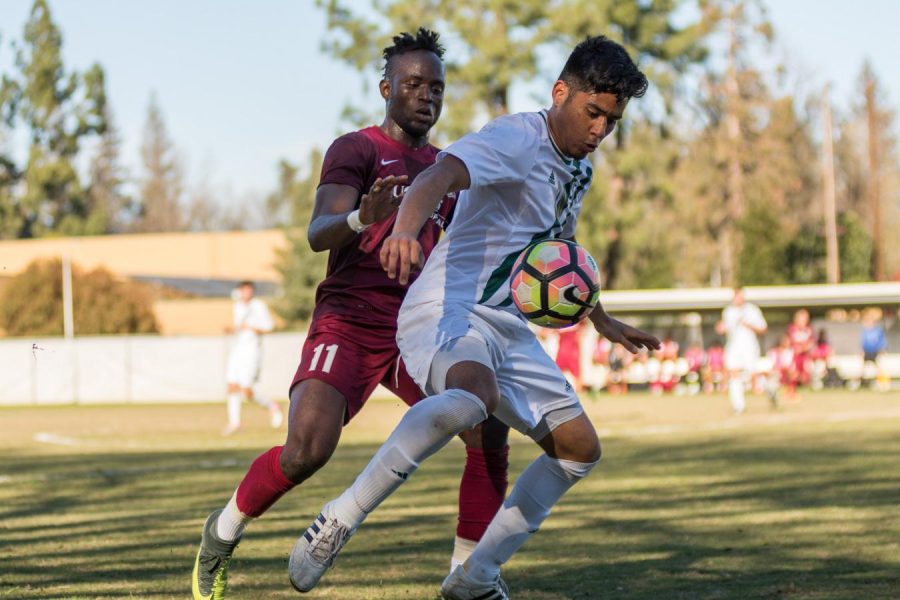 Former Sac State defender Abraham Rosales shields the ball away from former Sac Republic FC forward Gabe Gissie during a friendly match at Hornet Field on Wednesday, March 1, 2017. It was recently announced that MLS may be coming to Sacramento very soon.

Sacramento State’s men’s soccer team lost two of their last three games, but they may have a major boost to their long-term prospects after recent developments with a local professional club.

The Sacramento Bee was first to report the deal between Major League Soccer and the Sacramento Republic Football Club to add the local team to the biggest professional league for soccer in the United States.

The Sac Republic FC, which currently plays in the United Soccer League, has been in the process of bidding for a spot in the expanding MLS for over five years now.

A recently strengthened investment group has expanded their pitch to include the construction of a new, state of the art stadium in the Railyard district just north of downtown Sacramento.

In total, the investments required to make it all work appear they will likely top $500 million dollars.

The report from The Bee on Sept. 6 included an important note that while the framework is in place, some details still need to be finalized. Even so, Sacramento Mayor Darrell Steinberg took to Twitter to share his confidence that a deal will get made.

While the deal is not finalized, we are working hard and I’ve never been more confident that we will bring @MLS to @TheCityofSac. https://t.co/OZoY7CiV6k

Such an agreement, if finalized, would be monumental for Sacramento, giving the city a second professional team at the highest level in their sport, along with the NBA’s Sacramento Kings.

Of course, many of the people who would be affected by the move to the MLS are on Sac State’s campus.

“I’m a season ticket holder,” men’s soccer head coach Michael Linenberger said. “I was since day one and I still am.”

But the link goes beyond simple fandom for the athletics department and its student-athletes.

“We’ve had a couple (of) players train with them in the summertime. When they have visiting teams come to play them, a lot of times they’ll come practice at our facility here. We’ve played them four or five times in scrimmage games.”

In the last couple of years, the friendly matches have been held at Sac State, where the school was able to promote the event and charge admission to raise funds.

Beyond that, having a professional organization nearby has allowed opportunities for standout players to train with the pro squad.

“That’s kind of a way to get your foot in the door,” Linenberger said. “They now have the player with them in practice on a daily basis. They get to know their training habits and really get to know the players personally a little bit better.”

Among those players is sophomore midfielder, Oscar Govea, who made his professional debut with the Republic’s youth academy program in 2017 against MLS team Seattle Sounders.

“It’s really exciting for the community and the youth players,” said Govea when asked about the potential for the MLS to come to Sacramento.

Govea played in every game for Sac State last season and was awarded co-Freshman of the Year honors in the Big West Conference. This year, he has already scored twice across four games, including a scorching volley against Gonzaga.

He spoke about what the change in leagues for the local pro team could mean for himself and his fellow players. Specifically, he named three former teammates in the Republic’s youth academy who signed professional contracts with teams in Germany.

“If (Sacramento) were to have an MLS team when they left, it would have been different because they would have had something to look forward to in their hometown,” said Govea.

That hometown attraction is going to be key in bringing more recruits to Sac State in the future, according to Linenberger.

“[Sacramento Republic FC] playing in the USL has had a major effect on us,” he said. “I think we’ve gotten a few recruits in recent years because they want to be in a town where there is professional soccer.”

“A lot of our kids have aspirations of being pros. (If) they know that if they’re in an MLS town and have a chance to be scouted on a regular basis, it makes a big difference.”

Linenberger is excited to continue to strengthen the bond between Sac State and the Republic FC. He thinks that good news for one team in the Sacramento soccer community is good for every team.

“We hope that we can produce some players that can eventually help them win games and championships,” he said. “Obviously we hope that we help our players get a chance to get their foot in the door to become a pro here in Sacramento.”

Sac State has had one alumni play for the Republic in former midfielder star Max Alvares, but more could be coming soon. Players like Govea could one day add their names to that list.

“Sac Republic is and will always be my heart,” Govea said. “For them to be an MLS team will give me more motivation to keep pushing myself, because the MLS is definitely somewhere I would love to play and somewhere I dream to play.”

Linenberger summarized the feeling in the local soccer community in the succinct and diplomatic way that could only be expected from a coach in his 31st year on the job.

“I think it’s a winning situation for everyone,” said Linenberger.