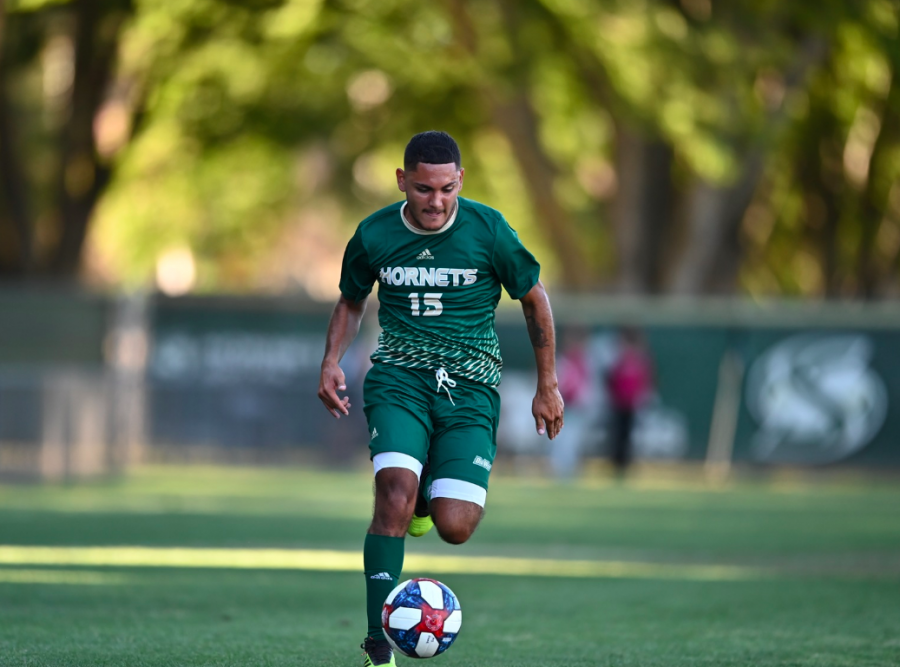 Sac State sophomore forward Arath Chavez dribbles the ball up field against Army on Friday, Sept. 6 at Hornet field. Chavez scored one goal to help lead his team to the 2-0 win.

The Sacramento State’s men’s soccer team kept its perfect streak alive against the #25 Air Force Academy Falcons at home Friday with a 2-0 win.

The Hornets were led to the win by sophomore forward Arath Chavez and senior midfielder Christian Guzman who each scored a goal.

Chavez scored in the 43rd minute to close the first half. Guzman scored shortly after in the 54th minute to begin the second half.

Friday’s game included a hard-fought battle at midfield in the first half. Neither team had many chances to score.

However, a costly mistake by the Falcons’ defense led to the first goal of the season for Chavez. The sophomore found himself with a loose ball and a net with no goalkeeper for an easy goal.

The Hornets started the second half right where they left off and were rewarded with the second goal of the game. Guzman, who also scored his first goal of the season, received an assist from sophomore midfielder Oscar Govea and struck the ball past the goalkeeper to give the Hornets a more comfortable two-goal lead.

After the second goal, it seemed the Hornets let the Falcons gain momentum.

Fortunately for the Hornets, Air Force never found the back of the net, despite having a good chance following a mistake from Sac State senior goalkeeper Ryan Curtis.

The goalkeeper made a mistake when he lost concentration of the ball and where his opponent was. This led to the Falcons stealing the ball from Curtis and attempting a one-on-one shot against the keeper. Luckily, Curtis was quick to react after his error and managed to block the shot attempt by the Falcons.

“There were the moments where I had to make a couple saves at the end, but overall I don’t think I was pressed too much,” Curtis said. “I think our defense held together once again. “Obviously, I messed up trying to go around the guy, but I made up for it at the end.”

This was the first of two games that Sac State had in the Copa de Causeway tournament held over the weekend at Hornet Field. The Hornets’ next opponent will be California State University, Bakersfield on Sunday afternoon.

Looking forward to the next game, Curtis admitted that it will be difficult to keep a clean sheet against Bakersfield. He said that the defense has to be fully concentrated and wary about Bakersfield’s attacking potential.

Head coach Michael Linenberger, in his 31st season at Sac State, said that he is optimistic about the start of the season but feels like there is still room for the team to improve.

“We can’t be satisfied with a pretty good first half,” Linenberger said. “If we try to relax with a one-goal lead it is going to come back to haunt us. We have to keep our foot on the pedal.”

Coach Linenberger recognizes how tough CSU Bakersfield will be this Sunday. pic.twitter.com/NrHScYPDtP

Linenberger said he knows the Hornets beat a good team in Air Force but anticipates another tough match against the Bakersfield Roadrunners. Linenberger recalled the last time his team played the Roadrunners, the Hornets won 5-4 in overtime.

“It’s going to be a game,” Guzman said. “Last year we beat them in overtime in one of the craziest games of Sac State’s history.”

Sac State plays next Sunday in a doubleheader with the women’s team. The men will begin at approximately 2:30 p.m. at Hornet Field.