Austin Roberts drafted in eighth round of MLB Draft 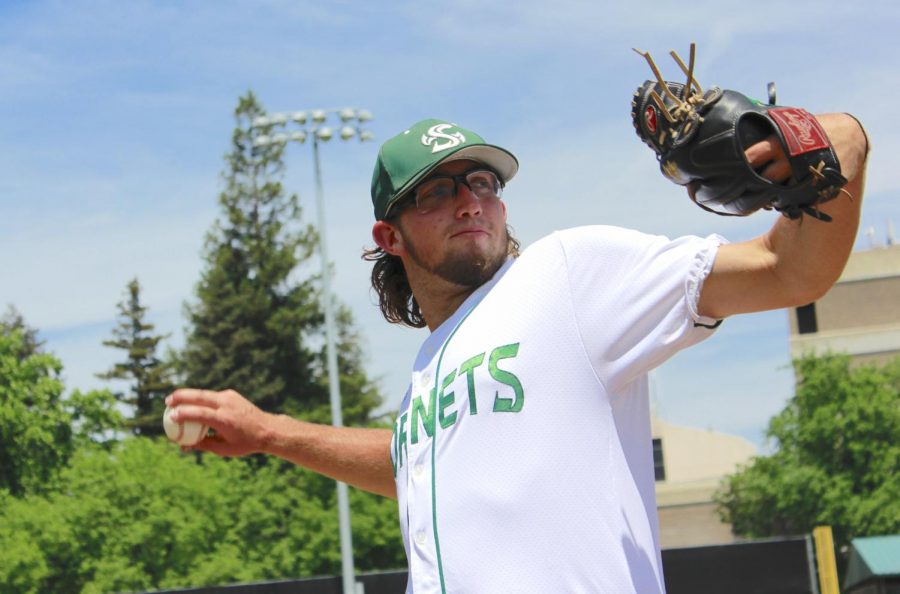 Sac State junior pitcher Austin Roberts was selected by the Pittsburgh Pirates in the eighth round of the 2019 MLB Draft. Roberts split time as a starting and relief pitcher during his three seasons at Sac State.

As a five-year-old boy growing up in Los Angeles, Austin Roberts’ first team experience with baseball was in Little League with the Pittsburgh Pirates.

Now, at 20 years old, Roberts will begin his professional career with the Major League equivalent.

The Sacramento State junior pitcher was selected in the eighth round of the 2019 Major League Baseball Draft by the Pittsburgh Pirates on June 4.

Roberts, who signed with the Pirates on June 11, is one of 21 players drafted to MLB from Sac State since Christiansen took over as head coach in 2011. Roberts is also the fifth player under Christiansen to be selected in the first ten rounds of the MLB Draft.

Roberts, who pitched 73.2 innings with a 5-4 record, six saves, 30 walks, 84 strikeouts and a 3.18 ERA this past season, said he experienced his lifelong dream of being drafted on June 4 at his home surrounded by friends and family.

“(When) my name got called in the eighth round for the Pirates, it was not just a sigh of relief but almost tears of joy,” Roberts said. “I was super ecstatic that my dreams came true. The job is not done yet and my ultimate dream is to play in the big leagues. With an organization like Pittsburgh, I have a good chance of doing that.”

Roberts was born and raised in Los Angeles as one of four children. Roberts moved to West Sacramento at age seven and went on to attend River City High School, where he primarily pitched and played third base. Roberts was named Tri-County Conference MVP during his junior season of high school.

Following his MVP season, Roberts received his only collegiate offer from Sac State head coach Reggie Christiansen, which he committed to.

Roberts, who pitched 63.2 innings with a 4-1 record, 40 walks, 44 strikeouts and a 4.95 ERA his freshman year, said he struggled during his first year at Sac State.

“I was overweight (and) couldn’t repeat my delivery,” Roberts said. “After (my) freshman year during the summer, I did a life-changing thing with my body and lost 35-40 pounds and got stronger. It translated over to the field and I had a pretty good sophomore campaign.”

Christiansen said Roberts struggled as a freshman due to a lot of expectations.

“We had some heart-to-heart conversations about what he needed to do physically to put himself in a better position,” Christiansen said. “I thought he came out of it on the right side at the end of his freshman year.”

Roberts, who pitched 54 innings with a 4-2 record, 13 walks, 55 strikeouts and a 1.83 ERA in his sophomore season, said Christiansen has taught him lessons in and out of baseball.

“I love that guy,” Roberts said about Christiansen. “That guy has done so much for me and my family in this whole process of, not just getting drafted, but coming here and recruiting me out of high school (and) giving me the chance to play at a Division I school against good competition.”

“I love that guy,” Roberts said about @SacStBaseball head coach Reggie Christiansen. “He taught me so many lessons, not just about baseball, but things I’m going to use for the rest of my life.”

Roberts is one of 21 players to be drafted to MLB under Christiansen since 2011. pic.twitter.com/xkJqkm2FNL

According to Walstad, the duo have known each other since they were eight years old. Roberts and Walstad have played baseball together for more than half of their lives, from little league, to high school, to playing Division I baseball together at Sac State.

“He’s a powerhouse that attacks the zone,” Walstad said. “He has a good secondary pitch and is a real bulldog on the mound. Off the field, he likes to keep it loose. But when he’s on the mound it’s go-time and he’s a competitor.”

Walstad believes Roberts, who split time between starter and reliever during his three years at Sac State, will succeed as a reliever in MLB.

“It’s almost a different mentality than a starter because you don’t wanna save your energy as a reliever,” Walstad said. “As a starter, you want to save your bullets to go deep in a game. I think Austin has a better opportunity of being a reliever because of his arm strength and throwing (less) innings will benefit him in the long run.”

Christiansen said he is confident that Roberts has the potential to be a relief pitcher in the MLB.