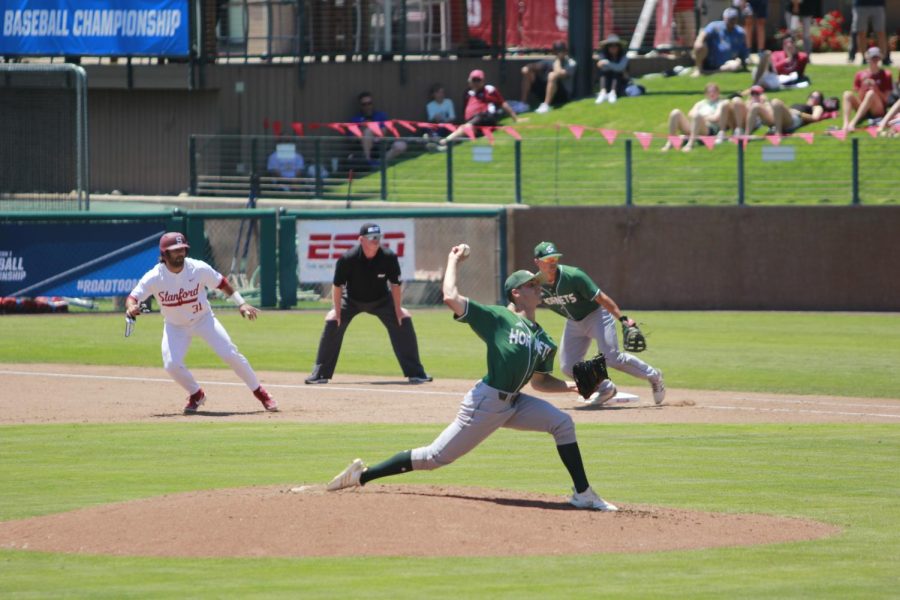 After winning seven straight tournament elimination games to keep their postseason alive, the 2019 Sacramento State baseball team met its end at the NCAA regional in Stanford.

The Hornets lost their first game on Friday to the Cardinal 11-0. Stanford scored one run in the third inning, four in the fourth, one in the sixth, two in the seventh and three in the eighth to secure the big win.

“We got behind and didn’t play very good defense early on,” Sac State head coach Reggie Christiansen said. “The turning point in the game was when we had a chance to get back in it and (junior outfielder Kyle) Stowers makes a big-time catch to rob a home run. If the ball goes out it’s 5-2 and a different game.”

“We really attacked them with fastballs and sliders (on Friday),” Beck said. “It was probably my first start where I didn’t throw a change-up.”

Sac State came back on Saturday in an elimination game against UC Santa Barbara. The Hornets scored the first four runs of the game with two runs in the second inning and two runs in the fourth inning.

The Gauchos made a comeback to tie the game at four. The Hornets responded with two runs in the bottom half of the eighth inning to retake the lead and ultimately win 6-4.

“These guys call themselves the ‘Heart Attack’ Hornets and a couple times in the course of the game (Saturday) we certainly had a couple heart attacks,” Christiansen said. “It was a special win from a special group of kids.”

Christiansen shared a story about the significance of winning 40 games following the win Saturday against the Gauchos.

“We have a Christmas party at my house every year,” Christiansen said. “We have a kid named Jack Zalasky who is the best teammate you’ll ever find, a walk-on freshman (pitcher), Sacramento kid. He jumped in my pool a few days before Christmas and said, ‘We will win 40 games.’ That has been the talk for a while.”

“You have to do what you think is right in terms of putting guys in spots that will give yourself a chance to win,” Christiansen said. “(Dalton) started the championship game of the WAC tournament and did a nice job and went five for us. It’s just piecing it together based on matchups and who feels good.”

The win against the Gauchos moved Sac State on to play another elimination game against Stanford. The Cardinal scored five unanswered runs to begin the game with a 5-0 lead. Sac State scored their first run in the bottom half of the fourth inning to trim the lead to 5-1.

In the seventh inning, the Cardinal scored seven runs to increase the lead to 12-1. Sac State junior outfielder Matt Smith responded with a two-run home run in the bottom half of the seventh, but it wasn’t enough for the Hornets as they were eliminated with a 12-3 loss.

“Boy, what a scrappy team, they had an unbelievable 40-win year, those are difficult to come by,” Stanford head coach David Esquer said. “Coach (Reggie) Christiansen is an outstanding coach and their players are just gritty and scrappy. (We have) a tremendous amount of respect for them and their staff.”

Sac State won 30 plus games for the eighth consecutive season. The Hornets won 40 games for the first time since 2014. The team, which has two seniors out of 29 players on the roster departing from this season, won the Western Athletic Conference and made the NCAA Regional for the third time in six years.

Senior outfielder Bronson Grubbs, who was the longest tenured Hornet at five years with the program, reflected on his time with Sac State following the 12-3 loss to Stanford Sunday.

“Coming in, Reggie gave me a chance with a walk-on spot,” Grubbs said. “All I wanted to do was to help take this program to the next level. We’ve been to two regionals in three years (and) even better days are ahead for this program.”