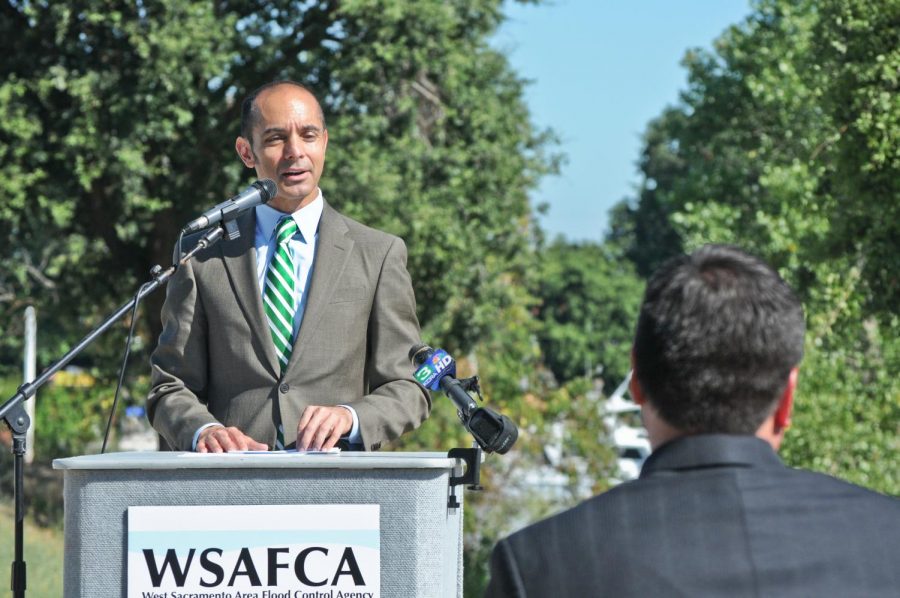 West Sacramento Mayor Christopher Cabaldon speaks at a groundbreaking ceremony for levee improvement in 2011. Cabaldon was recently hired as an endowed professor at Sac State.

West Sacramento Mayor Christopher Cabaldon was hired as a full-time, tenured professor at Sacramento State, taking over the Hazel Cramer Endowed Chair in the college’s Department of Public Policy and Administration.

This represents only the second endowed chair in Sac State’s history. According to a Sac State press release, Appalachian State University professor Antonio T. Bly was recently named the Peter H. Shattuck Endowed Chair of Colonial History for the College of Arts & Letters.

According to Sac State’s website, Cramer worked as a bookkeeper and accountant for the State of California, connecting with Sac State through the Renaissance Society. When Cramer passed in December of 2014, she donated $3.5 million to create the new position.

Cabaldon said he that in his new position, he will be visible both at Sac State’s main campus and at the downtown campus, teaching classes in both locations.

“I’ll be teaching, researching, and engaging in service and projects with a particular focus on solving enduring social and economic challenges in the region and state,” Cabaldon said on his city Facebook page.

“The possibility of transforming the community was an intriguing opportunity for me,” Cabaldon said.

Ted Lascher, interim dean for the College of Social Sciences and Interdisciplinary Studies, said the position has little precedent at Sac State, leaving Cabaldon to shape the roles he will fill at the university.

President Robert Nelsen welcomed Cabaldon in the university’s announcement of his appointing.

“While his expertise as mayor will bring a unique perspective to the program, the breadth of his knowledge in public policy and education is significant,” Nelsen said. “I look forward to the impact he will make on our students and the public policy program.”

Cabaldon has served as the mayor of West Sacramento since he was first elected by the city council in 1998. He was directly elected in 2004.

Sac State music education major Anthony Oliva said he thinks there aren’t many people more suited than a mayor to be a public policy and administration professor.

“I think it’s great that figures like that, outside of normal education, care about that and want to be teachers,” Oliva said. “So hearing that the mayor will become a professor is great because I’m sure with his line of work, he can bring a lot of things to the students that he’s teaching.”

According to Cabaldon, Sac State’s faculty reached out to him because of his background in working with the state legislature and, on a national level, with the United States Conference of Mayors.

“The teaching work I do is deeply rooted in practice from the work I do,” Cabaldon said.

In 2003, Cabaldon served as a Sac State adjunct professor of public policy and administration.

Lascher said that beyond Cabaldon’s previous work at Sac State, it was his work in politics that led him to stand out among more traditional candidates.

Cabaldon said that he will continue to serve as mayor while teaching at Sac State.