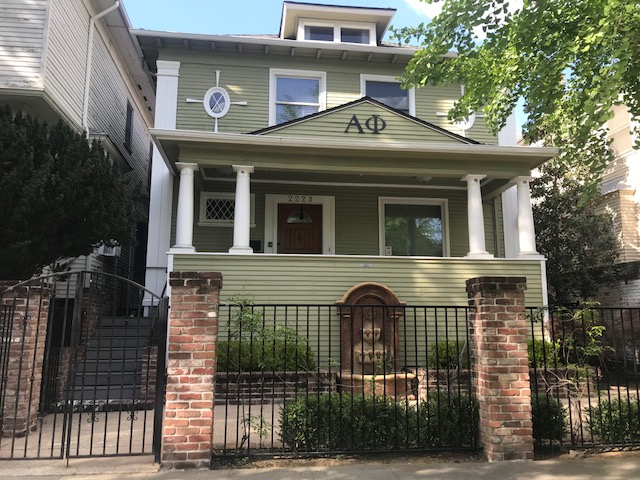 Sac State's Alpha Phi chapter house is located in Midtown Sacramento. According to Student Organization & Leadership Interim Director, Nicki Croly, Alpha Phi has its own housing policies that are seperate from the university.

Off-campus housing for Greek chapter officially recognized and registered by Sacramento State is limited, with only one recognized house among 37 chapters.

Sac State’s Greek life community includes 16 fraternities and 21 sororities, all of which are recognized by the university, according to university spokesperson Anita Fitzhugh.

The only officially recognized off-campus house in the Sac State Greek system belongs to the university’s Alpha Phi sorority chapter.

According to SO&L Interim Director Nicki Croly, every student organization follows the policies outlined in the Student Organization Handbook. Therefore, the Alpha Phi house must “comply with the laws of Sacramento and the State of California and hold invited guests to the same standard of conduct,” according to the handbook.

According to the SO&L handbook, those organizations are expected to obey the laws — local, state and federal. The groups must also operate within the policies and procedures of the university, including the Student Conduct Code.

Alpha Phi has its own policies related to housing, according to Croly. When asked about those specific rules and regulations, chapter president Mia Niklewicz, declined to comment.

Croly said in an email that Sac State does not have any policies that prohibit fraternal housing.

“I can only assume it is due to the high cost of living in Sacramento to own or rent properties, a lack of funding/resources to navigate the approval process within the city/county to have a residence zoned, and/or the chapter does not have permission from its international organization,” Croly said in an email.

In an interview with The State Hornet, Sac State’s Associate Vice President for Students Affairs and Dean of Students, Beth Lesen said there was no such thing as “unregistered, unregulated (fraternity) houses.”

On Friday, April 12, former chapter member William Molina was shot and killed in a pellet gun shooting, according to the university and the Sacramento Police Department. 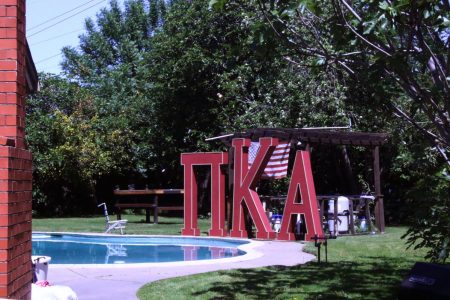 Margherita Beale – The State HornetLarge Greek letters are visible next to a backyard pool over the fence of the home where 21-year-old Sac State business major and Pi Kappa Alpha member William Molina died after being shot by a pellet gun Friday, April 12. Members of the university’s chapter refer to the home as ‘The Fratican.’

Molina died at an “off-campus gathering,” according to the release. The incident occurred at the Lycoming Court home where a few chapter members reside and refer to as “The Fratican.” Large, red Greek letters are visible next to the home’s backyard pool.

According to Lesen, unless specific rules are violated, like having official events without notifying the university, Sac State administrators overseeing Greek life chapters do not monitor students living together off-campus.

The handbook states that misconduct that occurs on university property can result in sanctions against the organization and/or individual members.

Regarding off-campus misconduct, the following can also result in sanctions:

If it occurred as part of a campus-related or recognized event
If it negatively  affects the health and safety of members of the campus community
If it  harms university property, or opposes or interferes with the mission of the university

Such a sanction came against Sac State’s Delta Chi fraternity chapter earlier this semester, when the chapter was banned from Sac State for three years following an investigation into potential hazing violations.

Recognized Greek status is granted so long as the organizations are in compliance with campus policy. Organizations that have their recognition removed by SO&L do not have access to any of the benefits of recognition which are outlined in the handbook and can no longer participate in any Greek life events on campus or anything else that requires university recognition.

Lesen said that the university does not provide any specific programs to assist the Greek community if they were to show interest in trying to obtain recognized off-campus housing.

“The university does not select residences for students off campus whether or not they belong to a student group.” said Lesen. “If a group was to participate in city or county process to acquire a residence and get it zoned appropriately, the University would support them in the endeavor.”

Sacramento City Code, Title 17, Division IV, Chapter 17, states that fraternity and sorority housing shall conform to operational standards. Every room used for sleeping purposes should have no less than 100 square feet of floor area.

If more than one person occupies a room used for sleeping, the required floor area should be increased 50 square feet for each additional occupant. The code also states that a property owner or a manager shall reside on the premises.

University of California, Davis has a Greek community of about 3,000 students within six governing councils, according to the university’s Sorority and Fraternity Life website.

UC Davis codes state that sorority and fraternity housing in the city of Davis is not owned, operated nor regulated by the university, according to UC Davis News and Media Relations Specialist Julia Ann Easley.

The housing in Davis is subject to city, county and state regulations, and is inspected annually by the Davis Fire Department.

The city uses the Living Group Code of Conduct for Good Neighborhood Relations (The Good Neighbor Policy) that went into effect in May of 2001.

The seven-page policy includes Section 40.01.010 of the City Ordinance for Davis city which defines living groups as, “Organizations, clubs, or associations (such as fraternities, sororities or co-operatives) that are in good standing with the university and include as a principal purpose the sharing of a residence by members.”

The policy states that members of organizations are expected to conduct themselves “as mature and responsible members of the city and University communities.” Therefore, they are responsible for upholding all state and city laws and ordinances, especially those relating to noise, traffic, parking, zoning and consumption of alcohol.

The chapter houses located on campus are “subject to a University Operating Agreement requiring compliance with campus rules and regulations,” said Easley in an email. “These houses are leased from the private developer of the project and are inspected regularly by UC Davis.”

According to Easley, UC Davis has 66 registered fraternities and sororities.