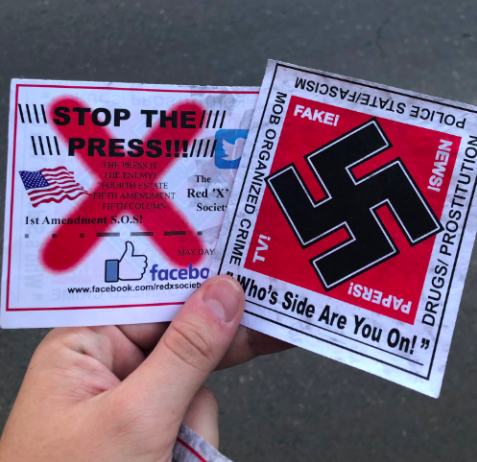 Flyers were dropped on both sides of the Guy West Bridge via aerial drone during Sac State's annual Farm to Fork festival. The flyers featured anti-media propaganda, with one reading 'Stop the press!!!' and another featuring a black swastika on a red background.

Flyers were also dropped near the Golden 1 Center on Friday, where hundreds were gathered waiting to enter the stadium for an Ariana Grande concert.

Not all of the flyers had the same design – one flyer featured several anti-media statements placed over a red X and phrases like “stop the TV whore takeover” and “the press is the enemy,” and another flyer featured a swastika.

Different forms of flyers were released over the event here a two different types. @TheStateHornet pic.twitter.com/g8Ua2Urreh

Flyers were released on both sides of the Guy West Bridge by an aerial drone around 6:30 p.m.

Sac State President Robert Nelsen, who was at the event when the flyers dropped, said he was appalled by the messaging on the flyers and that the university hopes to “stop whoever did this.”

“Sacramento State condemns in the strongest terms the dissemination of hate speech and propaganda Friday evening at our annual fundraising dinner on the Guy West Bridge,” Nelsen said in a statement Friday night. “The anonymous act of spreading such vile material is offensive and runs counter to the principles of inclusion and diversity practiced at Sac State. It did not stop the event, nor will it slow our march toward greater understanding and commitment to the rights and safety of our campus community.”

The sold-out dinner was not interrupted by the incident, and guests continued to eat on the Guy West Bridge more than an hour after the flyers were dropped.

The Sacramento State Police Department was notified about the incident and will handle the subsequent investigation, according to university spokesman Brian Blomster.

The Sacramento State Police Department did not immediately respond to request for comment.

The flyers dropped on campus include web addresses to “The Red ‘X’ Society” social media accounts, which feature anti-media posts and a link to an April video of a drone releasing flyers over the California State Capitol.

One version of the flyers dropped over campus featured “Tracy Mapes © 2018” written in the top left corner.

American River College student and Sacramento resident Tracy Mapes was arrested in 2017 on suspicion of dropping anti-media leaflets over two NFL games in Santa Clara and Oakland, the American River Current reported in 2017.

Twitter user @TracyMapes tweeted links to what appear to be overhead drone images of the State Capitol and surrounding area on Thursday.

The same user also tweeted photos of the flyers that fell over Sacramento on Friday.

Dear Billy, Do you remember the bit you did for a Jimmy Buffet Record back a long time ago about the Antennas being the Enemy? They’re back. pic.twitter.com/ePgklB2DaP

— Tracy Mapes (@TracyMapes) April 25, 2019
Mapes was a staff member on the Current, American River College’s student news organization, during the spring 2016 semester, but left after butting heads with other staff members, The Current reported in 2017. Mapes began working on a manifesto he called the “Red ‘X’ Society” sometime before his time on staff.