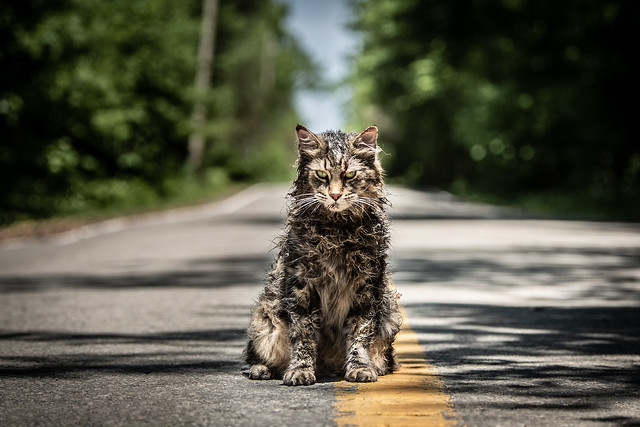 This review contains spoilers for all “Pet Sematary” adaptations.

“Pet Sematary,” the new film adaptation of the Stephen King novel, is a horror film remake that will both please and disappoint fans of horror.

Directed by Kevin Kolsch and Dennis Widmyer, “Pet Sematary” succeeds in creating a setting that is eerie and frightening, but fails to conclude the story, with what can be considered a questionable change to the original story’s ending.

“Pet Sematary” tells the story of the Creed family moving from Boston, Massachusetts to Ludlow, Maine. The family discovers the Pet Sematary, a place in the forest where locals bury their pets.

Main protagonist Louis Creed, played by Jason Clarke, explores beyond the Pet Sematary to bury the family cat Church, only to discover that the place where he buried Church can bring back the dead, but with unexpected consequences.

Like the novelization, “Pet Sematary” has a dreadful atmosphere with a plot that makes viewers think — how good of an idea is it to bring back someone from the dead? The story shows us that the dead can come back from the dead, but much more aggressive, even murderous.

As John Lithgow states in the movie, “Sometimes dead is better.”

The story itself is scary, but the most frightening scene occurs during Ellie’s birthday party, the eldest daughter of the family.

Ellie runs out into the street to grab their cat Church, after believing Church had run away from home, resulting in Ellie getting run over by a moving big rig. The scene is the most gut-wrenching not only because we watch the death of a child, but we then see the family go through the grief of losing a child.

Ellie’s death marks an important plot point, not only for how sorrowful the story becomes, but because it leaves the audience with the realization that the story does not end well for the characters.

Laurence basically plays two different characters in one movie, showing her capabilities as an actress.

Unfortunately, the movie fails to end with a conclusion that makes sense.

The movie ends with both Ellie’s parents, Louis and Rachel, getting buried in the sematary, then with the rest of the undead family, go after their youngest son Gage Creed, implying his fate of being buried at the pet sematary.

The original ending to the novel has Louis bury his wife at the sematary, resulting in her resurrection before coming to get Louis. The movie ends with both parents getting buried in the sematary, then going after their youngest son Gage Creed with the rest of the family.

The book’s ending should have transpired in the movie to help service Louis’s story of tragedy and grief, giving the audience a better picture of his flaw to do whatever it takes to make himself and everyone else happy.

#PetSematary review:
– one of the best horror movies I’ve ever seen
– very unsettling
– cinematography is beautiful
– acting is on point
– I don’t like cats anymore😱

Despite an underwhelming ending, “Pet Sematary” shows us what it means to experience a true horror, capturing the looming sense of hopelessness in a terrifying situation that the Creed family goes through.

This is one of the best Stephen King adaptations and is worth a viewing for fans of horror despite the ending not being the best.