Residents and donors work to rebuild Paradise after Camp Fire 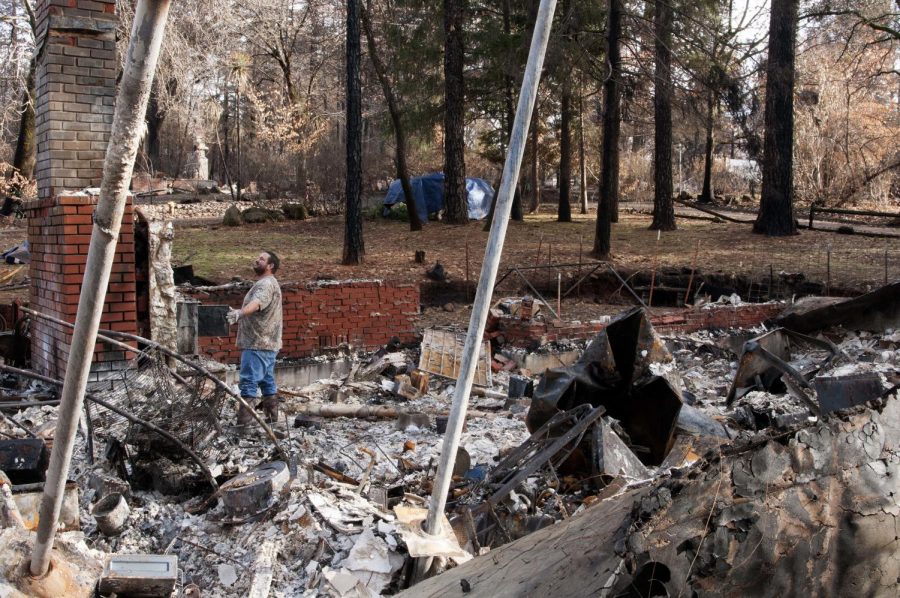 Paradise resident Eric Gowins stands in the rubble that was once his home. The only recognizable structure that remains is his fireplace which presides over the lot.

Out of the ashes of the most destructive wildfire in California history, a long, challenging journey lies ahead for the thousands of families affected by the Camp Fire.

For six months, Paradise and Butte County residents affected by the fire have struggled to recover from the devastation that ravaged their community, destroying roughly 14,000 residences and killing 85 people.

Immediately following the outbreak of the Camp Fire, federal, state and local organizations rallied to aid Paradise and Butte County. Federal organizations like the Federal Emergency Management Agency (FEMA) and the American Red Cross have provided temporary housing, food and necessities to those in need.

Based in Chico, local organizations like the North Valley Community Foundation (NCVF) have also greatly contributed to assistance of the fire relief efforts.

David Little, the director of communications at the NVCF, said that when the fire started, the organization opened a Camp Fire relief fund for anyone who wanted to help the Butte community.

“The donations were fast and furious,” Little said. “The immediate need and use of that money was the relief and recovery. Just giving people whatever they needed. A roof over their head obviously, food, clothing, shelter, whatever we could do.”

The NVCF has received roughly $45 million in donations from across the country, according to Little. Around $3 million has been granted to various schools, government entities and organizations providing that direct relief for people.

The NVCF has also given around $6 million to the Butte Strong Fund, which is partnered with both Sierra Nevada Brewing Company and Chico native and NFL quarterback Aaron Rodgers to provide long-term recovery assistance to Paradise.

The rest of the money will continue to be given to fire relief organizations through grants and the Butte Strong Fund.

Little described the effects of the fire as nothing he had ever seen in his lifetime.

“It is really hard to describe unless you are here and see it, but just the community is wiped off the map,” Little said. “We’ve seen fires before that had an effect on an area, but nothing where 90 percent of the town was incinerated and those people who live up there just want their lives back. Instead they are living in tents, trailers or homes where they don’t want to be.”

Ursula Smith, administrative analyst within the Paradise town hall, said that it is currently estimated that around 2,000 people Paradise residents live either in RV’s or standing structures.

According to Smith, over 26,000 residents lived in the town prior to the fire.

Paradise Mayor Jody Jones said that there has been a wide variety of responses from Paradise residents.

According to Jones, the first building permits since the outbreak of the fire were issued on March 28, but that the process for submitting these permits is going to take a number of years.

Jones is grateful for the donations and the support that has poured into the community since the fire.

“It means the world,” Jones said. “It has been amazing. From the welcoming arms of the city of Chico to people halfway around the world, how kind and generous they have been to us.”

Many students and organizations at Sacramento State have either been affected by the fire or compelled to help the Paradise community.

The Case Management office (CARES) at Sac State has provided support to any Paradise student seeking assistance following the fire.

Danielle Muñoz, CARES case manager, said that anytime there is a natural disaster that affects students, she will reach out to students whose zip codes are on file for those affected areas and give them a comprehensive list of available resources they can use to help their situations.

“In general, I think it is really important for the whole campus community to come together when any student or group of students are experiencing crisis because we are all in this experience together, in terms of education,” Muñoz said.

Mary Persons, a Sac State junior communication sciences and disorders major, grew up near Paradise, where her aunt lived.

With the help of communication sciences and disorders professor Celeste Roseberry-McKibbin and students Marisa Dix and Kristin FitzGerald, Persons created a book drive to help children in Butte County affected by the fire.

Persons said that in the beginning her goal was to donate 5,000 books, but within the first two months they had already surpassed that. She wants to continue the book drive and plans to bring thousands of more books up to the Butte community.

Jones said that the Paradise community continues to need this kind of support from anyone willing to help as the town continues to recover.

“This is a marathon, not a sprint,”Jones said. “We are in this for a long time so please do not forget about us.”

The current focus of the Paradise community is to continue the clean up of debris in town and to eventually rebuild again.

“There is a good opportunity to reinvent itself,” Little said. “It will not be as big as it was, but hopefully it will be better planned and people will be  living there for all the reasons they used to live there.  It is a beautiful area and a good place to live.”