Michelin to include Sacramento restaurants in first-ever California guide

Other cities added include Los Angeles, San Diego and Monterey 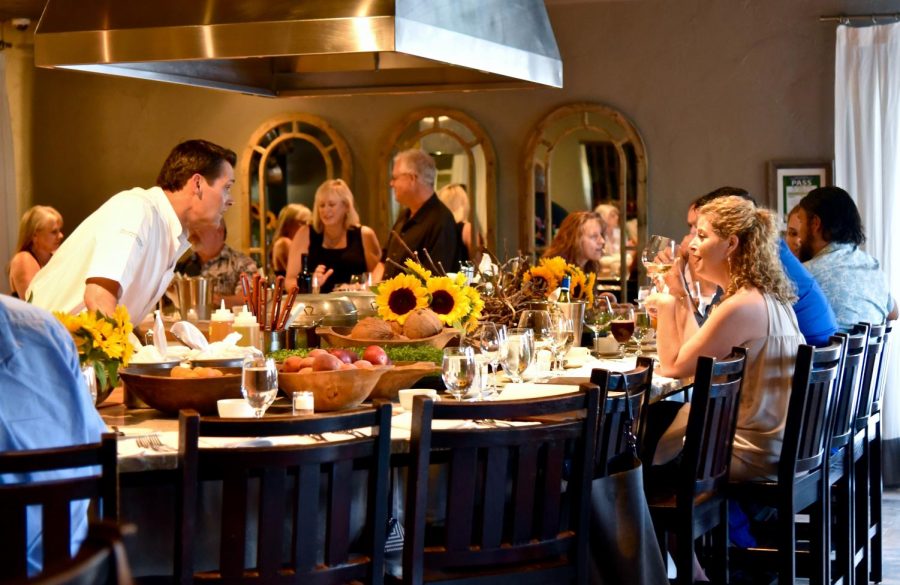 The Kitchen guests enjoy dinner and glass of wine at the counter surrounding the chefs, who cook and prepare their meals right in front of them.

Sacramento was recently added to the list of cities whose restaurants may be highlighted in the esteemed annual Michelin Guide, a decision that has sparked excitement for some Sacramento State alumni restaurateurs.

The Michelin Guide is a book series that publishes 37 annual guides dedicated to both cities and countries which include their ratings and restaurant reviews.

Other cities included in the new California coverage are restaurants within the greater Los Angeles, San Diego, Santa Barbara and Monterey areas.

Michelin, Visit Sacramento and Visit California all attended the conference as well as a number of visiting chefs, The Sacramento Bee reported.

According to Michelin’s website, “anonymous inspectors of different nationalities assess restaurants around the world each year based on five criteria: quality of the ingredients used, mastery of flavor and cooking techniques, the personality of the chef in his cuisine, value for money and consistency between visits.”

Minnie Nguyen, 35, graduated from Sacramento State with a degree in social studies in 2007. Nguyen ended up in the restaurant business in Sacramento with her husband, Thinh Le, who is also a Sac State alumnus.

Nguyen and her husband own two Firehouse Crawfish locations, STATION 38 Coffee, STATION 16 Seafood Restaurant & Bar and STATION 8 Burgers. The couple also has two Korean restaurants in the works, they told The State Hornet.

“It’s great for Sacramento to be on the map with the Michelin,” Nguyen said. “We do have amazing food here. There’s a lot of farms and we’re the capital of Farm-to-Fork.”

Josh Nelson graduated from Sac State with a degree in business and marketing in 1998 and is the CEO of the Selland Family Restaurants group, which owns five restaurants based in Sacramento and El Dorado Hills.

“You’ve got to love the restaurant business if you’re going to do it; it’s a lot of work,” Nelson said.

Nelson also said he was “super excited” when he heard that Michelin will rate restaurants within the Sacramento region.

“I think it’s huge for the region. The power and the prestige of Michelin is really unparalleled and that’s great for any restaurant that has it,” Nelson said, “I think there’s also an opportunity for our market just to be realized as a mature market and that people don’t have to leave home to go learn something somewhere else and that’s huge for our industry.”

Restaurants must have the perfect combination of all of the criteria mentioned above to receive any sort of star rating, and they can be awarded up to three stars.

According to the guide, one Michelin star rating signifies a “very good restaurant in its category,” while a two-star rating restaurant is described to possess “excellent cooking” that is “worth a detour.”

A three-star rating, however – the most prestigious of all – means the chosen restaurant offers “exceptional cuisine” that is “worth a special journey.”

Past U.S. guides have only included San Francisco, Chicago, New York City and Washington DC. San Francisco and Wine Country will now be included within the California guide.

California being the first state to ever have their own regional guide among the Michelin Guide series is something well deserved, Nelson said.

“It’s such an influence of cuisine, period. There is more product grown here (in California) than anywhere in the world, period. We’re kind of a nation state.” Nelson said. “Truth is, we’ve got a little bit of everything and there’s so many influential figures from California in the culinary world that have influenced things across the country that it seems like a very natural fit to me.”

Anonymous inspectors have already been through the Sacramento area giving restaurants a try. None of the restaurants nor their ratings will be announced until June.