FROM THE ARCHIVES: Student unrest over corruption and deaths shut down campus nearly 50 years ago 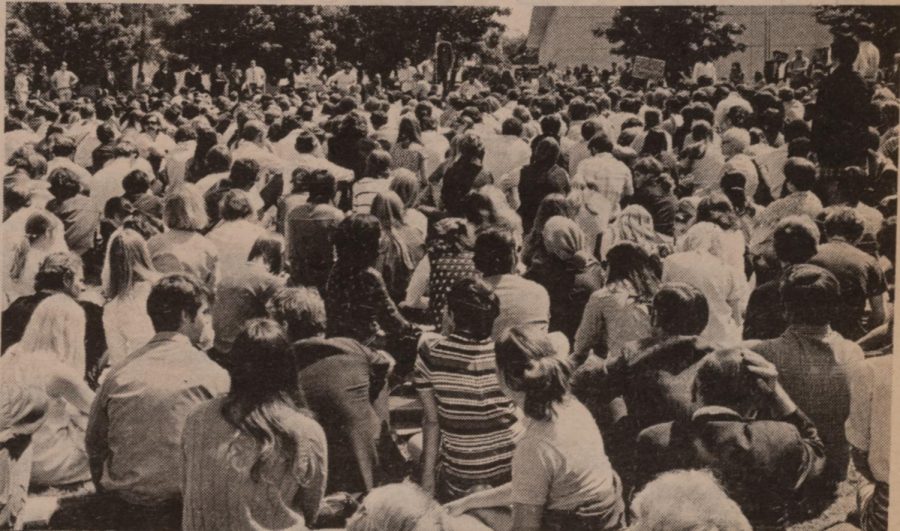 The musty, yellowed pages of a State Hornet article from May 6, 1970, tell the story of a student strike against the National Guard’s killings of four Kent State University students and the U.S. invasion of Cambodia that eventually led to a campus shutdown.

Former California Governor Ronald Reagan ordered the closure of all state universities and colleges for the remainder of that week, according to George S. Craft, Jr.’s book “California State University Sacramento: The First Forty Years: 1947-1987.”

The State Hornet reported that the protest May 5, 1970 morphed into an open-mic rally moderated by Steve Whitmore, former president of the Associated Students of Sacramento State College, now called Associated Students, Inc. Whitmore also requested funding for what he called “a revolution” and said the strike was planned to last four days.

In the immediate years following, Sac State students disrupted a university speaking event inviting Nobel Prize winner William Shockley to speak on campus about “the links between intelligence and genetic differences between blacks and whites,” according to Craft.

Craft said students protested by wearing Ku Klux Klan robes to the event and Pan African Students Union president Jack Graves commandeered the microphone at the podium, while “several scuffles had broken out on the floor.”

Since then, Sac State students have played an instrumental role in protesting recent conflicts in Sacramento and the Trump administration’s policy changes.

Sac State students and faculty were among the hundreds who took to the streets of downtown Sacramento in a march toward the State Capitol over the election of President Donald Trump in Nov. 2016.

Hundreds of students marched through campus in protest of Trump’s executive orders on immigration in Feb. 2017. Demonstrators and student activists from multiple campus groups spoke in the library quad before forming a circle to protect muslim students praying.

Students also organized and demonstrated against Trump’s decision to rescind DACA on campus in Sep. 2017. The next day, student activists took to the U.S. Immigration and Customs field office in Sacramento.

Sac State students counter-protested the Westboro Baptist Church’s demonstration against the PRIDE Center in May 2018.

Most recently, students took to the streets protesting against the police killing of Stephon Clark in 2018 and the Sacramento County District Attorney’s decision to not criminally charge the officers responsible in March.

The State Hornet is celebrating its 70th anniversary with stories from our archives. Below is the original article by Paul Kronenberg, Jerry Hall and Jim Austin, published May 6, 1970. For more throwback content, click here.

“ON STRIKE! Shut it down! Campus protest of killings and Cambodia reach SSC”
The slogan is revived, “ON STRIKE – SHUT IT DOWN!” Only this time nobody is kidding, not after four students at Kent State in middle-America Ohio were mercilessly gunned down by National Guard troops.

The possibility that Sacramento State will be closed as tight as a drum today seems very unlikely. Yesterday at 8 a.m. pickets and striking students formed on the Esplanade to protest the Cambodian invasion and the killing of the four at Kent State. From there the movement ballooned into an informational, open-mike rally on the Quad. The rally was moderated by ASSSC President Steve Whitmore.

Petitions calling for the impeachment of President Nixon were circulating and seemed to be drawing favorable support. Student leaders exhorted the crowd to take the protest seriously, because repression is just as bad for whites as for anyone else. Dr. Otto Butz, college president, reacted to the strike demands by cancelling classes in the afternoon on Tuesday so that a general faculty meeting could be held from 2:35 to 3:50. The meeting is to discuss SSC’s educational activities and responsibilities in relation to the new direction of U.S. policy in Southeast Asia and of the current situation on American college and university campuses.

Whitmore said that the strike plans included Thursday and Friday as well as today. Nothing this big has happened to Sacramento since the October peace march. Nixon’s questionable decision seems to have triggered reaction across the country, the scale of the protest yet undetermined but mounting. What has been going on at Berkeley and Stanford now seems to have filtered its way down to the state college level.

Besides the picketing and rally, strikers used literature to get the information to the people.

Strike supporters passed out information to students even before classes began Tuesday morning. As morning classes got underway, leaflets and information sheets were being widely distributed to students entering class buildings. Three demands were listed:

1) Elimination of military recruiters on campus until the U.S. military ceases to implement criminal policies.

2) Elimination of corporate recruiters on campus whose policy is that of profiting from war or imperialistic oppression.

A statement by Otto Butz concerning the lowering of the flag to half mast said:

“At 8 a.m. this morning, May 5, 1970, I ordered the flag to be lowered to half staff in mourning for the four students’ lives which were lost on the Kent State University campus and in expression of the need that has been so tragically underlined by their deaths for rationality on all sides as we cope with the fate of higher education and our Country at this difficult time.”

Speakers at the rally in the Quad expressed different feelings:

A student affirmed his belief in non-violence but stated: “I am at the end of my rope.” After stating his sympathy in those who believe in violence he stated, “I will not take part in it. For Christ’s Sake, get off our backs.”

Bob Brace: “The only justification for the war is economic… Communism is trying to save the people of Asia from U.S. aggression.”

Another student: “Let’s stop the learning until next Friday… let’s close down this campus.”

Mel Pose: “Is it revolutionary to ask people to stop killing? Four days isn’t enough. Shutting down this campus, period, will stop the war in Viet Nam and Cambodia.”

Steve Whitmore, while asking for funds, “The revolution needs money, support the revolution.”

Clark Taylor: (a professor) “We’re just as oppressed as anyone could be. People are afraid that they’ll lose what they got; we ain’t got nothing. This is Nazi Germany!”

With the flag flying at half-mast in honor and respect for the four dead students in Ohio, Sacramento State braced itself for what could prove to be an educational experience far beyond normal classroom expectations.