FROM THE ARCHIVES: 1988 was Hornet football’s best year ever 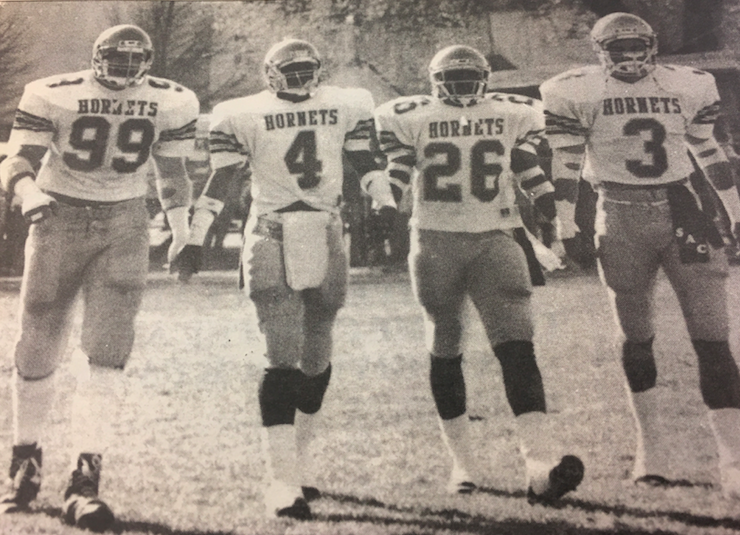 The 1988 Div. II semifinals game is the furthest the Hornets have gone in the team’s postseason history. During the season, the team beat local rival University of California, Davis twice — once during the regular season, and once during the playoffs.

November of 1988 is the farthest that Sacramento State’s football team has ever advanced in the playoffs.

Then staff writer for The State Hornet, Joe Krieg, said the Hornets “pummel[ed]” the North Carolina Central Eagles in the game. The Hornets won 56-7.

At the time, the team was led by head coach Bob Mattos. The stars of the game included quarterback Troy Trosin, wide receiver Ron Weaver, and second-string fullback Robert Martinson.

Current Atlanta Falcons quarterbacks coach and Super Bowl 50 champion Greg Knapp was the running backs coach for the Hornets during their deep run to the playoffs.

This win was the Hornets tenth win of the season, the only time they have done that in Sac State history. It took place during the second round of the NCAA Division II playoffs.

The Hornets advanced to the DIV II semifinal in Fargo, North Dakota, where they lost to the undefeated North Dakota State Bisons by a final score of 42-20.

The 1988 Div. II semifinals game is the furthest the Hornets have gone in the team’s postseason history. During the season, the team beat local rival University of California, Davis twice — once during the regular season, and once during the playoffs.

The State Hornet is celebrating its 70th anniversary with stories from our archives. Below is the original article by Joe Krieg published on (Nov. 29, 1988). For more throwback content, click here.

Throughout the 1988 football season, CSUS Head Coach Bob Mattos has repeated that it is important for the Hornets to improve each week.

However, it is going to be hard for Mattos to get a better effort than he got out of his players last Saturday in the second round of the NCAA Division II playoffs.

The Hornets did whatever they wanted to do on that chilly afternoon, pummeling North Carolina Central 56-7 to advance to the Final Four.

We are playing about as good as we can and at the right time,” said Mattos. “I think this is our best overall game of the year. It’s a great honor to be in the Final Four with teams like Texas A&I, North Dakota St. and Portland State.”

The victory gives the hornets their first 10-win season in school history. It also gives them the right to take on the undefeated North Dakota State Bison this Saturday in Fargo, N.D. The winner will advance to the championship game in Florence, Alabama on Dec. 10.

The Hornets got past the visiting Eagles in familiar fashion. It was similar to the way the Hornets rolled over Chico State, Humboldt State, and most recently, Cal Lutheran: by compiling big offensive numbers while holding their opponents to insignificant numbers.

Senior quarterback Troy Trosin continued his dream season, throwing for 250 yards and four touchdowns in the first half as the Hornets build a 35-0 lead. Wide receiver Ron Weaver was deadly, catching eight passes for 167 yards and three touchdowns.

The Hornet defense didn’t allow the Eagles to get off the ground. Earl Harvey, the Eagles quarterback and the Division II all-time leading passer, never got into his rhythm in the face of a hounding Hornet defense.

“The defensive line was tenacious” said Mattos. “(Ken) Stinnett, (Fine) Mau Mau, Junior Nua, and (Saia) Loketti did a great job of shutting them down.”

The Hornets set the tone both offensively and defensively early in the first quarter. On the fifth play from scrimmage Trosin hit Ron Weaver on the left sideline. Weaver broke a tackle and streaked to the endzone for a 55 yard touchdown and a quick 7-0 lead.

After the kickoff, on the Eagles’ first offensive play of the game, Mau Mau sacked Harvey for a 13-yard loss. The pressure continued throughout the game, forcing Harvey out of the pocket and out of passing position. Harvey was so often on the run that he rushed more times (20) than anyone in the game.

Symbolic of the Hornets domination was the fact that second-string fullback Robert Martinson was the games leading rusher, gaining 140 yards on 17 carries.

Perhaps the only disappointment of the game was that the Hornets sustained some injuries. Having been blessed with a minimal number of injuries during the season, their good health finally caught up with them.