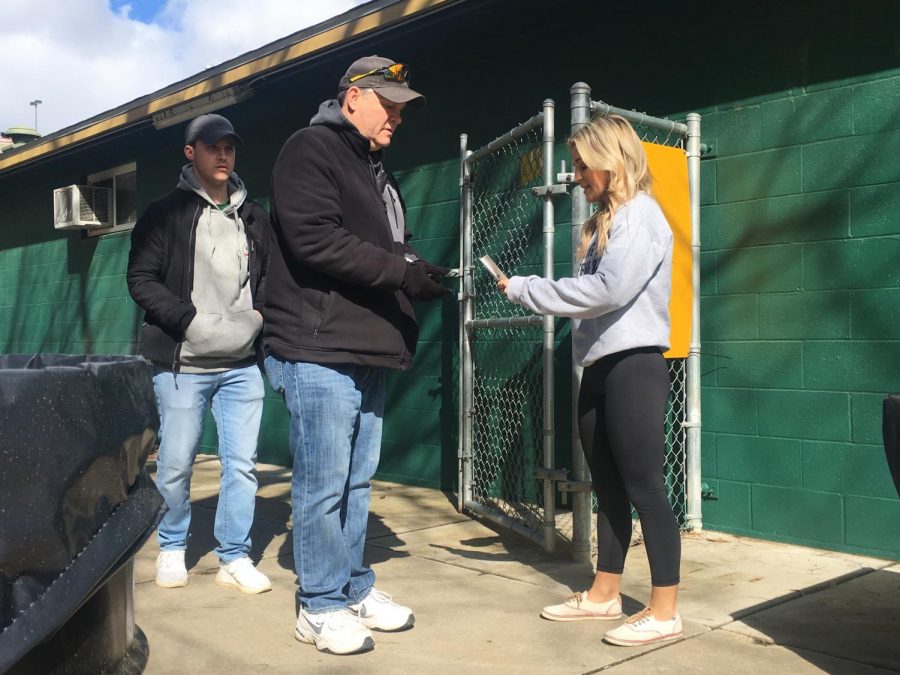 Former Sac State gymnast Dallas Smith is now the director of ticket operations and fan engagement at her alma mater. Along with running all of the athletic ticket accounts, she steps in to help wherever she is needed and sometimes scans tickets at sports events.

Everything was prepped for the 6 p.m. kickoff between Sacramento State football and Northern Arizona University on Nov. 10 of last year. Sac State Director of Ticket Operations and Fan Engagement Dallas Smith was preparing the student seating section and ensuring ticket ushers were ready.

Then, at 3:53 p.m., the game was canceled when the air quality index rose to 218 due to smoke from the Camp Fire in Butte County, one of the deadliest fires in California history.

Less than a week later, both the men’s and women’s basketball teams also canceled their games against Cal Poly and Ohio State respectively.

“You waited to hear the call whether we were going to play all those games and then the rush to make sure everyone was informed that it was canceled and that they were getting their refunds quickly,” Smith said.

She said she called each ticket holder individually to see if they would like a refund or a ticket to a different event on campus.

Doing one job is something that Smith has never been able to stick to. Smith juggles multiple responsibilities in the Sac State athletics department ranging from selling season tickets to making sure each fan has an optimum experience.

Growing up, Smith said that all she wanted to do was compete at the Division 1 level in gymnastics. For 14 years, she trained to reach that goal.

While in high school, Smith competed at Naydenov Gymnastics studio in Washington and was also enrolled at Clark Community College where she earned her associate degree.

But when the time came to pick a college to attend, Smith said she didn’t have any scholarship offers. Two of her high school classmates, Kalliah McCartney and Kayla Wonderly, were headed to Sac State.

When Smith visited the campus, she said she instantly fell in love with its surroundings. After her visit, she decided to attend Sac State.

The Washington native then battled to earn every second of gym time that she could get as a walk-on gymnast.

Immediately her presence was felt.

In 2014, she qualified on floor for the NCAA Seattle Regional in her home state of Washington.

RELATED: Gymnastics team gears up for last half of 2015 season

While still a gymnast, Smith began preparing for her post-athletics career.

In 2014, Smith began interning in the sports compliance department at Sac State. The following year, she began working in the ticket office. In 2016, a year after she graduated, she was named the Director of Ticket Operations and Fan Engagement.

“I get to do all the operational things for the ticket office, so that’s building and selling tickets for all of our athletic events,” Smith said. “A lot of season ticket sales, season ticket renewals. And then gameday management is a big part of (my) job.”

“She is as good as anyone that I’ve seen out on the college level for sure,” Berger said. “(She does) everything that is gymnastics related, talking about the skill, talking about what was good, what needed to be worked on. The knowledge of the sport makes her so good.”

Campus administrators and staff often move between campuses, but Smith said she is very happy at Sac State. According to assistant media relations director Ryan Bjork, she is one of 21 former athletes who work for campus athletics.

“I don’t think there is every going to be anything that replaces the passion that I have working for my alma mater and I think that is something that everyone here who is a former student athlete can say,” Smith said.