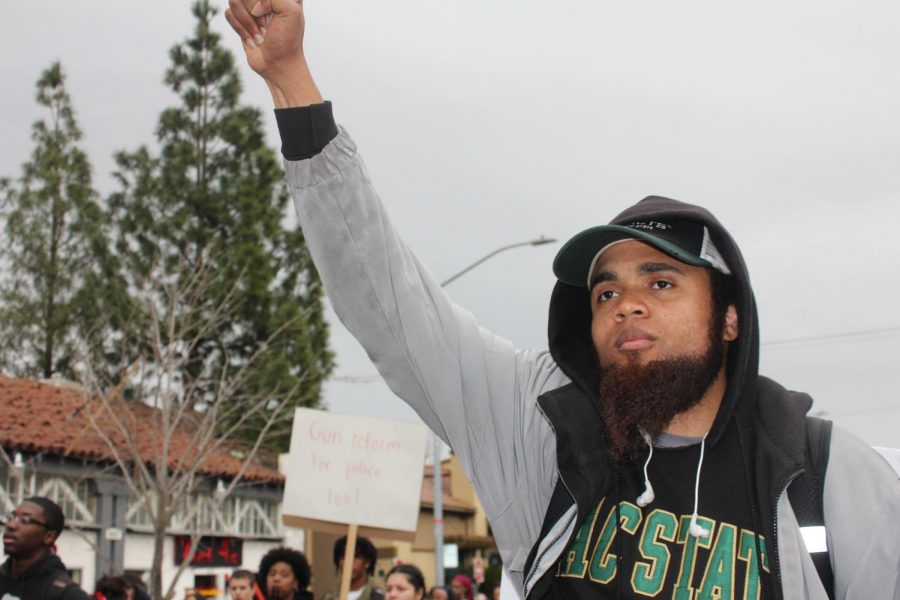 Sac State student Ronnie Guice, a history major, joined the student walkout from Sac City College to the Capitol protesting the Stephon Clark decision Thursday, March 7. Guice said the history of the U.S. was one of genocide in various forms, like rape, murder, ordinances, and laws contributing to the oppression of certain groups.

A year since Clark’s death made national news, protests have sprung up again in response to Sacramento County District Attorney Anne Marie Schubert’s announcement that charges would not be filed against Terrence Mercadal and Jared Robinet, the officers who shot Clark.

RELATED: A timeline of events since the death of Stephon Clark

Sac State student Andrew Ohaeri, who goes by Uche, said he was one of the 84 arrested protesting Schubert’s announcement Monday night in East Sacramento.

Ohaeri, a member of the Nigerian Student Association, said the experience was traumatic.

“That shit sucked,” Ohaeri said. ”That shit sucked because for one, I’m 20 years old, I never thought I’d be arrested, and then be arrested for that reason right there of exercising my right of freedom of speech.”

RELATED: #SacStateSays: What is your reaction to the mass arrests made at Monday night’s protest?

“I’m sure they’re great people, outside of their badge number, or their armor and stuff like that, but that shit is not right when they have their badge on. They turn into a whole different person, and they cannot see that,” Ohaeri said.

Police on bikes sped to the front of the student walkout procession from Sac City College down Freeport Boulevard. @TheStateHornet pic.twitter.com/isWjn8xOwe

Chants of “Say his name — Stephon Clark,” “No justice, no peace, no killer police,” and “It’s a phone, not a gun!” rang out as anywhere between 100 and 200 students swept over seven miles to the Capitol Building.

“Let ’em hear you in the Fab Forties, let ’em hear you,” someone hollered through a megaphone in reference to the affluent East Sac neighborhood where Monday’s protest took place.

The march took around four hours to complete, passing through Midtown, Oak Park and Broadway. Some residents emerged from their houses to cheer the protestors on. Activists distributed water bottles and snacks periodically, and encouraged each other to take breaks.

“Right now, we are trying to get Sac High students safely out of school, so that we can walk to the Capitol where people are waiting for them, to support them,” said Andrea Moore, an ethnic studies professor at Sac State.

Payden said Sac State faculty and staff needed to take time to show their awareness of how these events impact some of their students.

“This is our next generation, they need to be involved with stuff like this, you know?” said Payden, a sociology major.

Sac State senior Ronnie Guice said, “A lot of people ask, what is a protest? A protest is about bringing awareness. Awareness is knowledge, and knowledge is power. With power, we have the ability to create change.”

The march remained peaceful, but tension simmered momentarily between the students and law enforcement officers who blocked off the freeway entrance on Broadway. The procession rolled on, under overpasses deeper into Midtown.

Joshua Stanford, a third-year business major and member of Sac State’s BSU said, “Right now, I feel pretty excited, pretty happy to be out here with all my people, protesting injustice that we face.”

When the protest reached the Capitol, organizers handed out pizza and snacks while student leaders from Sacramento High, Sac City College, and Sac State delivered speeches. The students were joined on the steps by Assemblyman Kevin McCarty, who voiced his support.

McCarty also voiced support for Assembly Bill 392, which he co-authored, which advocates for more protocol outlining when lethal force can be used by officers.