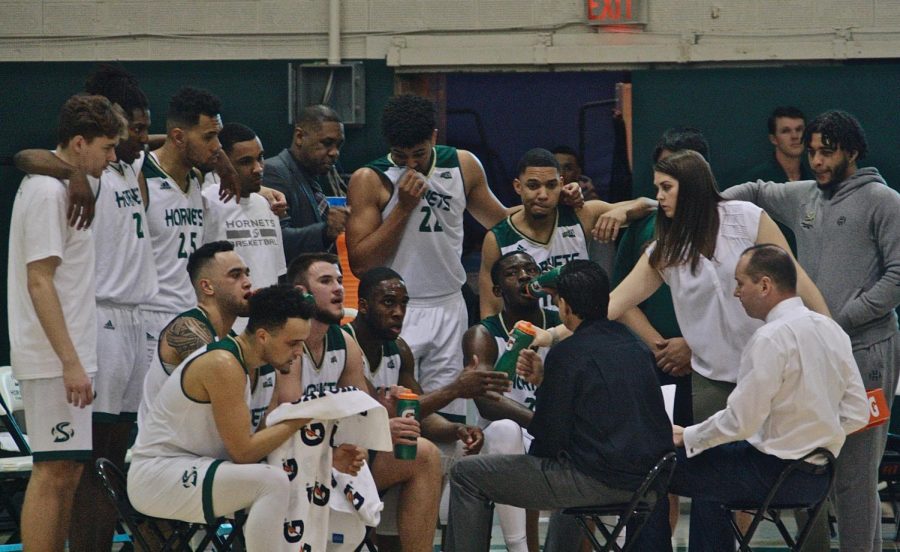 The Sac State men's basketball team listens to head coach Brian Katz during a timeout on Thursday. The Hornets defeated Montana State 70-67 to improve its record to 14-14.

The Hornets overcame a slow start as they trailed by 9 points early in the first half but were able to out rebound Montana State and hold them to 37.1 percent shooting from the field.

“We grinded it out defensively,” head coach Brian Katz said. “We told our guys the key is going to be (Harald Frey) and (Tyler Hall) … they are like Batman and Robin.”

Hall, who averages 20.1 points per game, scored 34 points and knocked down 8 3-point field goals. Hall is the all-time leading scorer in the Big Sky Conference.

“He’s a great player, he makes a lot of tough shots,” said Sac State center Joshua Patton. “So our game plan was to force him to make those tough great shots consistently. We played tough defense on him he just made shots.”

Patton finished with 10 points and 16 rebounds, giving him his fifth double-double on the year for the Hornets.

“Last couple games people have been leaving me open,” Jacobs said. “My teammates and coaches have been getting on me to shoot the ball, shoot the ball and be more aggressive. I just pick and chose my shots if they leave me open.”